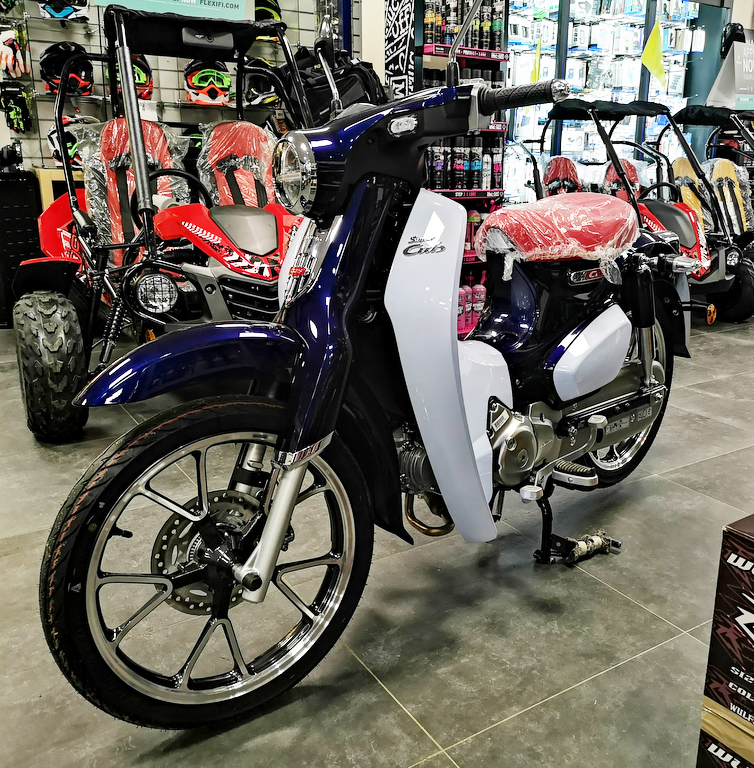 DD Motoring: Reeling in the years

In the last week before Christmas Donegal Daily’s motor columnist Brian McDaid takes a look at the best-selling motor vehicle ever as it goes retro following a resurgence in what was once the most basic form of transport.

There are stories told of amazing achievements of this mode of transport which outlived the first people that made them an everyday part of life growing up in Donegal.

When it was first introduced it had a top speed of 43mph (in ideal conditions). An engine of only 49cc could do up to 225 miles on a very good day to the gallon driven at 19mph and has a fuel tank capacity of two-thirds of a gallon of fuel.

It sounds more like the latest prototype car of the future addressing our carbon footprint, but don’t look forward to find this look backward to see the spec for the one and only  Honda 50, which has been here for the last 60 years.

For me, I always thought that Honda 50’s was just a thing in rural Ireland, something like a natural transition from the old three speed black Raleigh bicycle.

In our we town you started off at to top of the Port Road in with Joe Harkin’s with his cyclist always on the move in the window where you bought your first bike. You then progressed to the foot of the Port Road where many the new Honda 50’s rolled out of wrappers on to the road for the first time, out of Dick Duffy’s corrugated-iron workshop painted in blue.

The Original Honda 50 also known as the Honda Cub

A brand new Honda Cub sits for sale at Motoworld showroom window on the Port Road.  There was a time you could have bought any new vehicle from a BMW car to Bedford van on the Port Road when Mc Mahon Bros, P.M.P.A, Ward and People’s and Mc Clean and Mc Laughlin sold between them nearly every new brand of car available in Donegal.

Now all of those businesses are gone from Port Road.

Even the late Dick Duffy, who was one of the dealers in Donegal for Honda, is gone but you still can buy a brand new Honda Cub in Gary Cooney Motoworld.

Many decades and still on the Port Rd just a couple of yards across from where Dick Duffy Shed once stood at Port House you can see what only can be described as one of the most stylish Honda 50 of Cub ever made in this 2018 model.

If you were to line up every one made end to end they would stretch around the world five times. That’s over one million of them in various forms from the first one rolled off the production line 60 years ago in 1958.

This year a very retro looking version was created by its maker to celebrate its birthday. The trusty Honda Cub motorbike is back 60 years after it first filled the requirements a basic transport. The Honda Cub also called the Honda 50, 70 and 125 all came under the Cub name.

Originally designed for the home market in Japan to deliver noodles around the congested Streets of Japan the nimbleness and its ease of driving soon caught on.

Unlike motorbikes of the day, these Honda’s were semi-automatic and had no clutch to operate so the three speed was the easiest of motorbikes to drive.

You meet the nicest people on a Honda 50

My neighbour James had a motorbike. He wasn’t a motorbike man. Just a man who needed his motorbike to get to work. I don’t think I ever seen him in a car let alone driving one.

As a child I remember him driving into our housing estate every evening getting off his motorbike on the roadway and with a firm grip on  the handlebars pulling the front wheel up on to the curb then walking up the footpath to the door of his house, then with the same action again pulled his motorbike onto its stand.

When he was going to work in the morning, he did the same procedure in reverse. Then turn the key to the ‘on’ position adjusted the choke on the carburetor in through the plastic fairing and on the second go with the kickstart his motorbike fired up and he drove slowly out of the estate.

In later years he drove his motorbike around the back of the house and did much the same procedure. His motorbike was a red and white Honda 50.

His bike to me looked the same but it probably was many different Honda 50’s all the very same red and white all with a carried at the back where a pair of waterproof leggings were rolled up on standby for bad weather.

Another neighbour Tommy built his motorbike in his shed at the back of his house, he and my father took an old motorbike that was lying up for years.

A Honda 50 with attitude kitted out for haulage.

They took apart sanded all the rust off cleaned it and repainted by hand with two brushes. It took forever for them to get it started, and between them, they clocked many miles of just pushing it over and back on the back road and the Honda not firing up. Only for the two of them to stop and fire up two cigarettes and think up another plan of getting the bike to fire up.

More to do with them not knowing what they were doing rather than the fault of the bike. More times than enough there had more spare bolts and nuts when the finished a job than when the started it. They had that single spark plug out, cleaned with a wire brush and heated on the range so many times that I think the motorbike itself started itself at the end out of pity for them.

The arrival of my 90

The first ever motor propelled a vehicle that I was the proud owner of was a Honda 90. The day I went to buy it I also kinda fell off it which wasn’t a great start.

Mine was an old motorbike, which lay up in a shed for years. We put fresh petrol in it and cleaned the spark plug and after a dozen or so kicks of the kick starter the Honda fired up. The 90 that I was looking at had a manual clutch compared to semi-automatic gearbox normally on the 50, 70 and most Cubs.

So mine clutched was seized in the “off” position before becoming seized in the on position and then the cable suddenly released and the bike took off on me.

A cleaner and less rusty version of the Honda that I first owned.

It was heading straying for the ditch on the other side of the road so I decided to let go of the handlebars and stand up which was working great at the bike travelled out from under me.

That was until a sturdy homemade carrier attached over the back mudguard caught me squared behind the two knees ripping both a gash in the leg of my trousers and two gashes out of both legs.

That bike was costing me £25 but the owner felt sorry for me and told me he would settle for £20 for it after I fell off it  and he also threw in an Auto Cycle into the deal which had a  seized engine.

There are 32 houses in the estate where I grew up, a service road follows the shape of the estate around the back of them. That was the TT course in my dreams when I did lap after lap of that back road up and down through the gearbox dodging old tin dustbins, and escaping from Tricksie, Ryan’s family pet dog,  a terrier which terrorised anyone who travelled that back road but hadn’t the legs to keep up with a Honda 90.

If it was cafe racers was what the big bikers were into my adventure was more like around Willie Crawford’s fields at the back of our house where I spent a summer racing around the fields which are now where the circular road is in Glencar.

The new Honda Cub which is 125cc has a list price of over €4,200 which is nearly twice the price of a basic Honda scooter, it sounds a lot but the best restored original classic Honda 50s  are knocking on the door of that price range, that’s if owners would part with them. That the case at Cooney’s showroom where and old Honda 50 sits in the window but it not for sale.

The new Honda is both fully automatic and can be changes manually, the Key is blue tooth which activates the alarm on the bike and the old double seat which transported many the passenger on Honda over the years is gone in favour of the original single seat which still sits on top of the petrol tank.

The latest in ABS brakes on the new Honda Cub

The push button starter sounds funny when you are looking at the iconic design of the new Honda Cub and expect to see the kick starter along the crank of the gearbox.

The New Honda even comes with ABS braking which all in all makes the new Honda a very safe bike with an Old world work look.