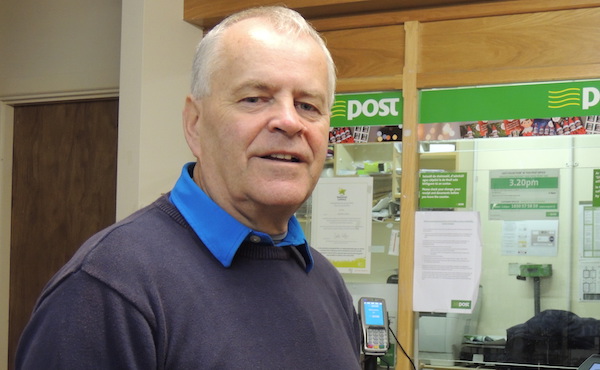 The last post to sound for Des after 40 years

Ballyliffin Post Office is to close down this evening after almost eighty years in the community.

One of seven Inishowen branches axed by An Post this year, Ballyliffin will shut for the final time tonight, Monday evening, December 31.

Des Kemmy, who will retire after almost 40 years as Postmaster and a lifetime in the business, says the time was right to go.

“I think I have done my time now at this stage. I have done forty years and I think that’s long enough,” he smiles.

Looking back, he has enjoyed his time behind the counter but will certainly miss his customers in the future.

“Working in the post office was a very good life. I was lucky enough to be working in a community with lovely, top-class people.”

Des officially took over as postmaster from his mother Anna way back in 1979, though he had worked for a year prior to that to learn the ropes.

In fact, he spent much of his life in and out of Ballyliffin Post Office and just about managed to outlast his mother, who had spent 38 years in the family business.

On a busy day, Des would have seen around one hundred customers at the counter.

He says everyone is wishing him well, though they are sorry to lose the post office too.

“Most of the services will remain here in the shop [Atlantic Stores] except the social welfare services which will be transferred to Clonmany or Carn,” he explained.

“I think people realise that I’m ready to go after forty years but there is also a bit of disappointment that it has come to this.”

Father-of-two Des, whose wife Rita will also retire from the business, has no plans to take things easy just yet, however.

He plans to carry on with his established photography and picture framing business while being captain of Ballyliffin Golf Club in 2019 will also keep him pretty busy.

Meanwhile, Michael McLaughlin, of Atlantic Stores, says the closure of the post office is another example of the “downgrading” of rural services.

“I would urge our local government, and our national government, to stop this policy of eroding services in rural areas. This is happening up and down the country.”

Ballyliffin becomes the fourth Inishowen Post Office to close in recent weeks, after Quigley’s Point, Ballymagan and Culdaff, with three more to close early next year.