Donegal had second highest number of road deaths in 2018

Ten people lost their lives on Donegal’s roads last year, putting the county among the worst affected regions for road fatalities in 2018.

Tipperary had the highest number of road deaths for an individual division in 2018, with 11 lives lost in collisions.

Road deaths in Donegal increased from six in 2017, and are now level with the 10 deaths recorded in the county 2016.

Garda records show that, across Ireland, there was a 4% drop in road deaths, making it the safest year since road deaths were first recorded in 1959.

This represents 7 fewer fatalities or a 4% drop in deaths. 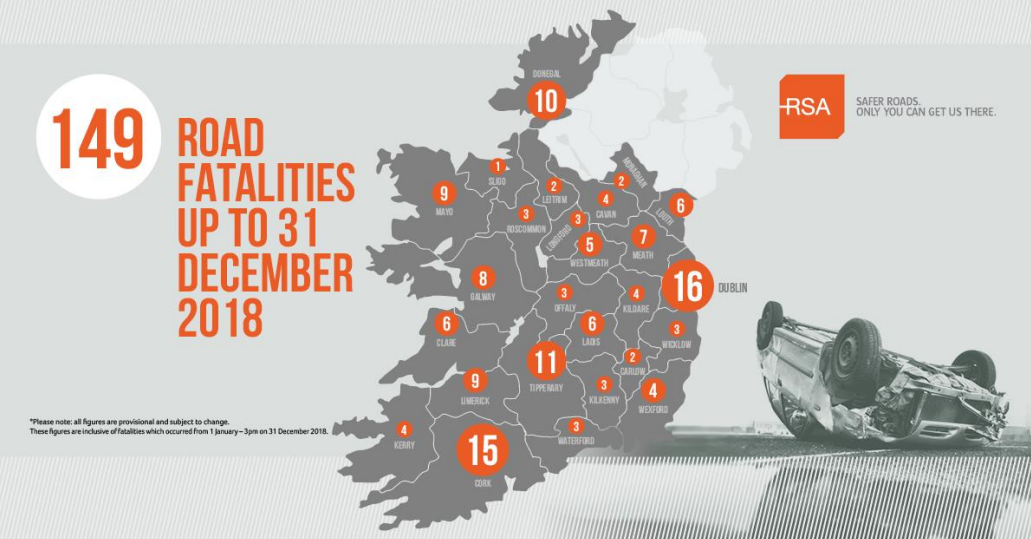 “Pedestrian safety, particularly the safety of older persons, will therefore be a key priority for the RSA in 2019,” said Ms. Moyagh Murdock, Chief Executive, RSA

Garda figures from 2018 reveal that over 130,000 drivers were detected committing speeding offences; almost 30,000 detected using a mobile while driving; almost 9,000 driving under the influence of an intoxicant; and over 11,000 were detected for seatbelt offences.

Assistant Commissioner Dave Sheehan, Garda National Roads Policing Unit, An Garda Síochána said, “As garda numbers assigned to Road Policing Units in districts around the country increase in 2019 I can guarantee that people will see a greater garda presence on the roads. Whether there are any detections for traffic offences is entirely up to road users themselves.”

Commenting on the country’s road safety performance, Mr. Shane Ross, Minister for Transport, Tourism and Sport said: “Although the figures are marginally improved, they are not good enough. Speed continues to kill (130,000 drivers were detected committing speeding offences in 2018).

“Drink driving persists and unaccompanied learner drivers continue to break the law. Reckless road users cannot be allowed to ruin the lives of innocent others and their families. In 2019 the crusade to improve road safety and save lives will accelerate.”