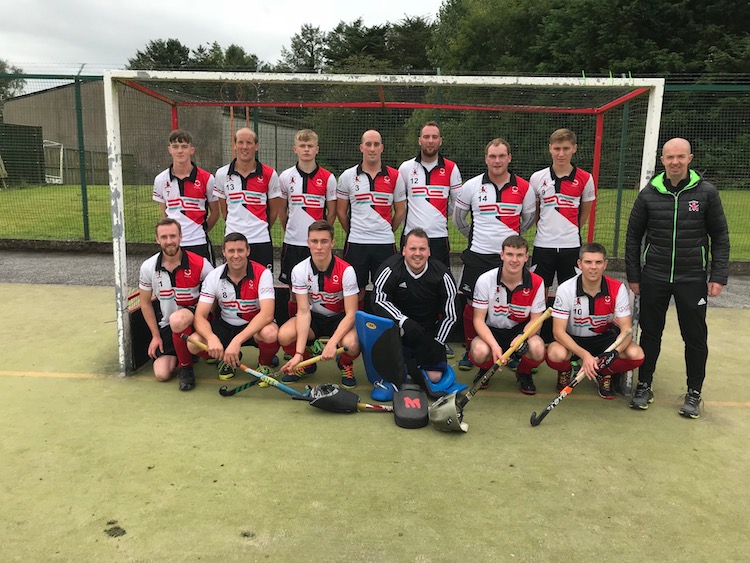 written by Stephen Maguire January 6, 2019
Facebook0Tweet0LinkedIn0Print0
Raphoe lost 5-2 in a gruelling game as they travelled to Edenvilla to take on Portadown.
Raphoe were in for a tough match against the Northern Irish side, who were 3 points above Raphoe in the league, as they only travelled with a starting 11 due to injuries in the squad.
Portadown had the first opportunity to take the lead in the first few minutes of the match through a short corner which went just wide of the Raphoe goal.
This set the tone for the opening 15 mins of the game as Portadown dominated and they made this dominance count when they took the lead from a short corner.
Raphoe had very little chances in the opening period of the match, but when an ariel ball from Zach West was missed judged by the Portadown defence it fell to Tommy Orr, and he rounded the keeper to get Raphoe back into the game, 1 – 1.
Portadown kept pressing Raphoe for another goal and had a number of short corners to regain the lead.
Raphoe were catching Portadown on the counter looking to hit their strikers as quick as possible, and Raphoe nearly took the lead when Tommy Orr got into the circle and his shot across goal was clear of the line and fell to Jake Watt, but he couldn’t react quick enough and the ball hit his foot.
Portadown took the lead again through a short corner. However, from the restart of the game Keith Meehan threw an ariel ball and this caused the Portadown defence to give away a short corner to Raphoe and from that short corner Raphoe won a stroke when the ball hit a Portadown player on the line.
Alan Meehan stepped up to take it for Raphoe to make it all square, however, Meehan hit the post and the keeper managed to clear the ball before it crossed the line, the half ended 2-1.
Raphoe knew going into the second half that the next goal would be important to the game, and they got vital goal minutes later.
Jake Watt won a free just outside the circle on the left-hand side and Jonny Long took the free and went on a solo run, moving the ball from the left of the Portadown 23 over to the right, beating five defenders to get into the circle to get his shot away.
Long’s shot was goal bound, but George Patterson took a touch to wrong-foot the keeper to secure Raphoe’s equaliser.
Raphoe battled on with 11 men trying to get a result out if the game, but Raphoe began to tire and Portadown took full advantage of some slack defending. Portadown scored 3 more goals to take a 5-2 lead.
Raphoe’s Zack West received a hit to the ankle forcing him of leaving Raphoe stuck as they only had 11 men so it fell to coach Rodney Bates to come and make up the numbers for the remainder of the match. The game ended 5-2 in Portadown’s favour.
Raphoe 1st XI: D.Moore, T. Eaton, E.Lyttle, K.Meehan, J.Long, T.Orr, Z.West, A.Crumley, J.Watt, G.Patterson, A.Meehan, R.Bates
Hockey: Portadown secure convincing victory against injury-stricken Raphoe was last modified: January 6th, 2019 by Stephen Maguire
Facebook0Tweet0LinkedIn0Print0
Tags:
hockeyportadownRaphoeRaphoe hockey