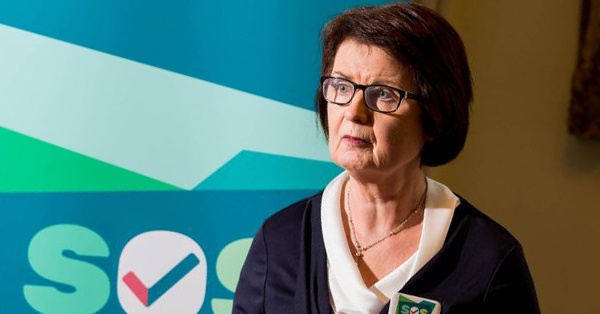 A Donegal school secretary is helping to lead the national call for fair deal for workers in her sector.

Kathleen O’Doherty (pictured above) has worked for over two decades as a school secretary in Letterkenny.

She works in a school of 50+ staff and approx 600 pupils and has campaigned for years for fair treatment for all school secretaries in Ireland.

There are approximately 3,500 school secretaries working in the education system. Roughly ten per cent of those are paid directly by the Department of Education and Skills, earning €24,000 – €44,711 a year. The rest are paid by school boards of management through their school’s ancillary grant – leaving some with salaries as low as €12,000 a year in extreme cases.

Kathleen is one of Donegal’s local Fórsa representatives, a public service union which is running a #SupportOurSecretaries campaign for fair conditions.

From her own experience, Kathleen has this message for policy makers:

“Approximately 90% of School Secretaries are denied basic entitlements such as maternity/sick leave, secure contracts or pension rights and poor pay after many years service.

“Many secretaries on incredible low rates of pay have served their communities for 20-30 years will retire into poverty without occupational pension. The two tier system where 10% of the country’s 3,500 School secretaries are paid directly by the Department of Education & Skills the other 90% via grant to the school leaving some with salaries as low as €12,000 per annum has to end.

“Fórsa, Ireland’s largest and most influential public service union has launched a nationwide campaign in support of the rights of School Secretaries to help put an end to this two tier system that has been allowed to continue for too long.

“Fair deal is all we seek nothing extra, parity for doing the same work as our colleagues, respect for the important role school secretaries have in ensuring the smooth running of schools throughout the country.

In June 2008, over 60 Donegal secretaries held a one-day stoppage to highlight the inequalities that exist within education. Kathleen said that these problems remain today.

Kathleen said: “The role of school secretary has evolved and essential to the delivery of quality public service. A good secretary can make a huge contribution to the efficiency and positive atmosphere of a school. Commonly the longest serving, trusted, indispensable member of staff yet the most neglected under the current model of employment.

“Perhaps it’s time our local Education Minister Joe McHugh took this issue in hand and put an end to this unacceptable treatment of school secretaries who have served their communities for decades.

“Minister McHugh, himself a past teacher, knows the worth of a good school secretary and he has supported our issue over the years.”

Fórsa wrote to the Department of Education and Skills last week seeking to open discussions on a new agreement on school secretaries’ and caretakers’ pay.

The SOS campaign will not benefit Kathleen personally, she said, as she is nearing 25 years service to the Department of Education. She will leave without pension and depend solely on Social Welfare due to the unbalanced employment situation.

“But for me it will be worth all the years of campaigning when all school secretaries will be respected with pay and conditions equal to those in similar roles in the public service,” she said.

A public meeting is due to be held in Donegal in the coming months, date to be announced.

Kathleen has also shared an online petition calling on the Department of Education & Skills to respect and value all School Secretaries. (www.forsa.ie/support-our-secretaries-campaign)

‘All we want is parity and respect’ – Donegal school secretary calls for fair deal was last modified: February 11th, 2019 by Rachel McLaughlin