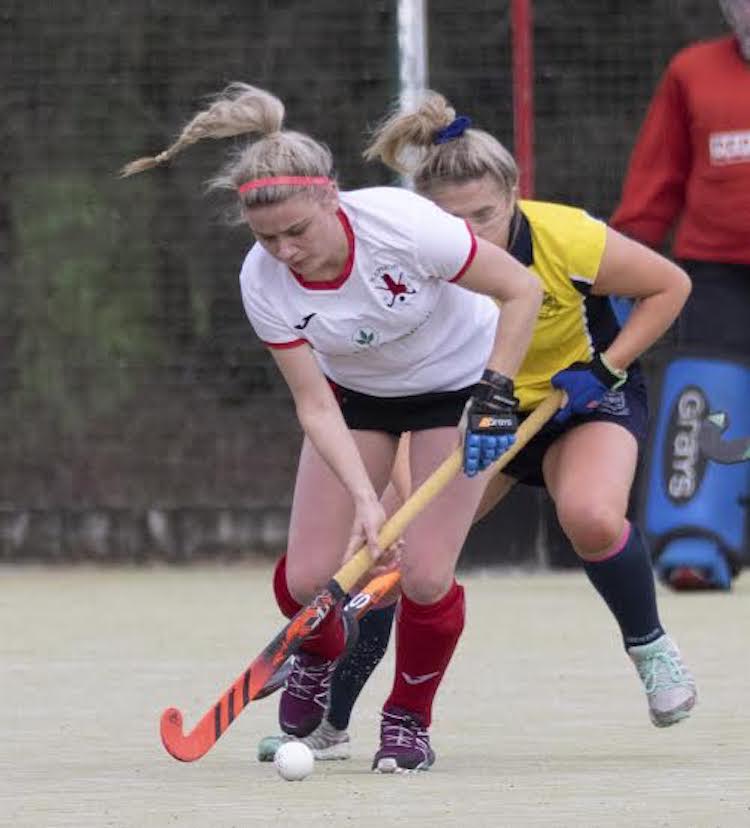 Another convincing win on Saturday, keeps the Raphoe 1st XI Ladies at the top of the table by three points, with a game in hand.

But with having 6 league games still to play, and 5 of those away from home, the ladies from Donegal need to keep the momentum going and can’t afford to take their eye off the ball.

To say that Raphoe started the game while still in warm up mode, would be an accurate description of the opening few minutes of the match.

North Down were quickest off the mark and did not hold back in calling Raphoe’s netminder in to action.   The attack came down the right hand side of pitch and in to Raphoe’s D, where an unmarked forward had a one-on-one opportunity with Humphrey.

The keeper came out to meet the North Down attacker, and managed to take enough pace off the shoot, to allow Victoria Wray and Janice Nelson time to get back and clear the Raphoe goal line, ahead of the advancing strikers.

This was a wake-up call for Raphoe and from there, there was no looking back.

This Raphoe team have been scoring goals galore in the past few weeks and many of these goal chances have started from their strong defensive line.

The opening goal of the game came from superb linking and movement of the ball from Kilpatrick, Wray and Nelson in the backline – these girls opened the pitch up wide and got the ball down the left to Lisa Patterson.

Patterson’s eagle eye seen an gap through to the North Down circle and she slapped the ball low and hard in towards same, where her sister Leanne Patterson was on hand to get a perfect touch on the fast paced pass to deflect it into the goal.

Having now gone 1-0 up, Raphoe continued to put pressure on the North Down defence.  Janice Nelson, Julie Wilson and Arlyne Kilpatrick were finding space to make runs down the wings, and it was through one of these runs by Wilson, that seen Raphoe win their first short corner of the game.

The short corner was well executed and much to the disappointment of Victoria Wray, her goal bound shot was saved on the line by a defenders foot.  Sabrina Barnett, stepped forward to take the awarded penalty stroke and with extreme precision, she placed the ball into the North Down net.

Raphoe’s third goal came just minutes from half time, Lyndsey Tinney broke down play in the centre of the field and found a pass to Barnett.  Barnett played a long through ball straight down the middle of the field to young Jasmine Tinney, who quickly played same through to Katy Love inside the circle.  Love drew the goalkeeper off her goal line and calmly slotted the ball against the backboard.

Raphoe were happy with their first half performance, but were under no illusions that a 3-0 scoreline could disappear very easily in the second half if they did not remain steady and focussed.

The start of the second half was much the same as the first – Raphoe were keeping good possession of the ball and were playing as a unit.  Sarah McErlean and Zara Tinney were busy running the flanks and their positioning off the ball was key to Raphoe’s structure.  Katy Love, Lisa Smyth and Rebecca Wauchope worked hard in the forward line, quickly closing down the North Down hit outs and forcing turnovers.

Wendy and Leanne Patterson, who have been battling it out for top goal scorer of the season, were on hand again for Raphoe’s 4th and 5th goals.  Wendy’s came from a short corner routine, where she was perfectly placed to rifle home a rebound shot that had come from Barnett.  Leanne took the scoreline to 5-0, when she made one of her dazzling runs down the left side of pitch – weaving her way in to the D, across the backline and smartly slipping the ball past the North Down goalkeeper at the near post.

It was Lyndsey Tinney who secured Raphoe’s sixth and final goal of the game.  Her smart positioning during a short corner set piece, seen her at the right spot at the right time, to deflect the ball high in to the net.

Arlyne Kilpatrick was as solid as a rock in defence and her work rate and effort on the day earned Player of the Match.

This was another good performance by the Raphoe Team, and needs to be continued on Friday night, when they travel to Carrickfergus to play Castle at 7.30pm.

It’s six of the best as Raphoe ladies sweep to another win was last modified: February 24th, 2019 by Chris McNulty