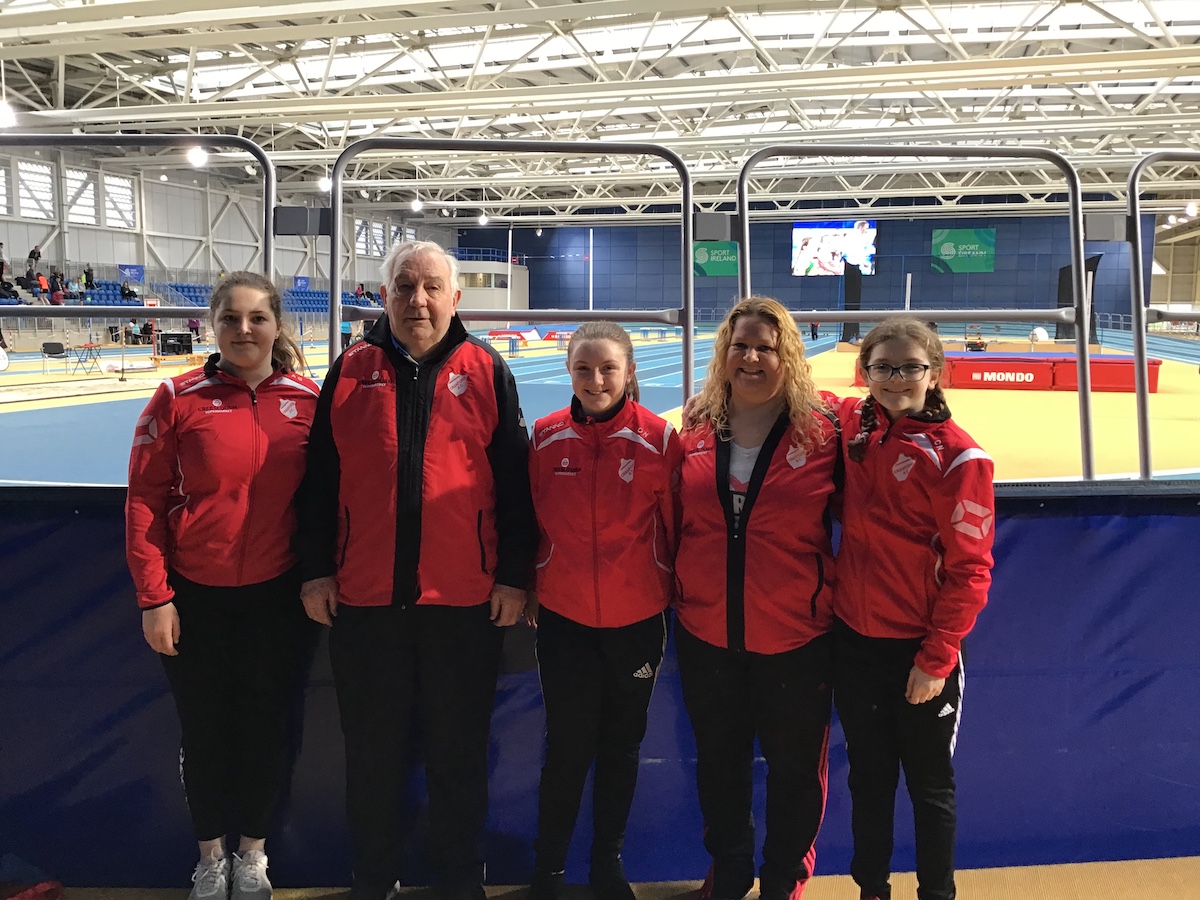 Cranford had seven athletes travel to the Abbotstown Indoor Arena to compete in the Ulster and NI championships.

Saturday morning got off to a great start for Cranford AC where Aoife Giles got a new PB of 11.89m and winning her the gold medal and the Ulster title for the girls U16 shot.

Aoife had great consistency in her four throws and now qualifies for the National indoors at the end of March.

Clodagh Neely was up next in the long jump, this is a new event for Clodagh and she gained very valuable experience that will stand to her in the future  – she went on later in the day to compete in the 800m having a good run and finishing in the middle of the field so a good day all round for Clodagh.

Oisin Kelly was up next for Cranford and what a weekend this young lad had going out in the 800m on Saturday where he got off to a great start sitting on the shoulder of Letterkenny AC’s Patrick McDaid and with one lap to go both boys had pulled away from the rest of the field and when Oisin made his bid for home there was no stopping him and with a new PB Oisin took the Ulster title in the boys U16 800m.

Oisin was back on Sunday again to run in the 1500m which was seven and half laps of the track. Oisin took to the boards again in impressive style and again pulled it out of the bag coming home in 1st place. Oisin now goes on to run in the National Indoors in Athlone at the end of March.

Oran Mc Menamin coming off the back off his great performance in the National B’s Cross Country Championships with a quick turnaround straight into the indoors ran a very fine race coming home in 4th place in the 1500m and now qualifies for the National Indoor Championships in March.

Teresa Mullen competed in both the long jump and 60m. Teresa had a good jump and came 4th overall and now qualifies for the nationals.

Ellie McFadden competed on Sunday – this was a first time experience running and jumping indoors and definitely won’t be her last with a very impressive start in the long jump setting a new PB of 3.95m and narrowly missing out on qualification for the Nationals finishing in 6th place.

She went on to compete in the 60m and had a great run – this was a great day for Ellie and one to watch.

Orla Neely was our next athlete to compete in the girls U15 shot, Orla has great commitment and puts in a lot of hard work and this paid off today with Orla getting a new PB of 8m and coming 6th overall – a very good result for this young athlete.

Our thanks as always to our dedicated coaches and parents who travelled and helped out on the day.