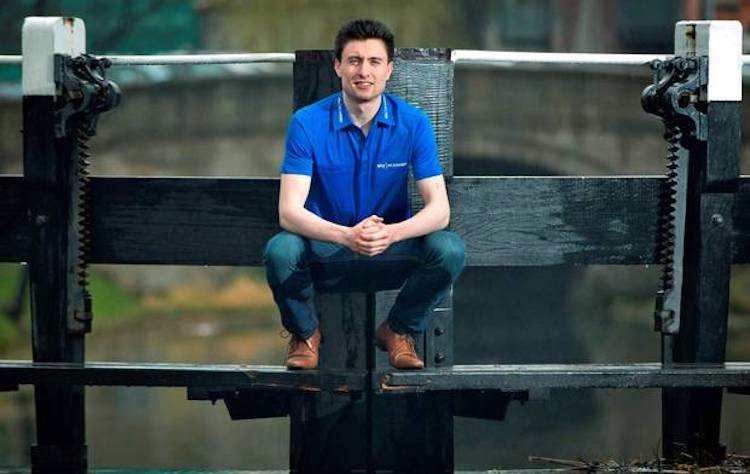 Mark English: Back on track with some scores to settle in Glasgow

Mark English knew the moment he stepped off the track at the Olympiastadion last August that something was amiss – and he had to correct it.

English came sixth in his 800m heat at the 2018 European Championships in Berlin.

Four years previously, he was the bronze medallist at the same Championships.

He had plenty of questions, but few answers.

A few weeks later, English headed for Manchester and underwent a biomechanical assessment.

The Letterkenny man’s resurgence since has been obvious.

He recently won the 800m at the Athlone International Grand Prix in 1:46.94 – his fastest indoor time in four years.

“I’m competing again and I’m able to do it more comfortably,” says English, who goes in the 2019 European Indoor Championships in Glasgow tomorrow.

“It’s been a good start to the season. I’m not injured, I’m not sick and I’m getting consistent training. That’s massive.

“I knew after the Euros that something was wrong. It was obvious, really.

“We looked at the video of the race, spoke to my coach and we figured, basically, that my biomechanics weren’t efficient. If I could clean that up, I’d go faster.

“I’ve worked on specific exercises since then. It shows out there.”

English won his sixth Irish Indoor crown and the old stardust is back again.

In 2015, English was a silver medallist at the European Indoors. Only Marcin Lewandowski – ‘he was just red hot,’ English ventures – was ahead of him at the O2 Arena in Prague.

“It all depends on entries and what have you, whether or not they’ll take the three fastest. It comes down to so much that it’s a lottery sometimes.”

In Prague, English won a silver medal that was his second European medal in a matter of months. In 2014, he was the European bronze medallist.

In Zurich, English became only the seventh Irish athlete to medal when he finished third, behind only the Polish pair of Adam Kszczot and Artur Kuciapski, at the Stadoin Letzigrund.

Prague, though, was a proof he needed.

He says: “Winning the second medal meant that I wasn’t a one-trick pony. It proved that.

“Having two European medals was important. It was proof to myself, never mind anyone else. It backed up the form I showed in that indoor season. I was ranked third or fourth going to the Championships, so I knew I wouldn’t be far off.”

A lot has changed since then for English.

He’s now coached by Steve Magness, who is based in Houston, Texas, having previously worked with the Melbourne-located Nic Bideau.

“There aren’t many athletes who are coached from 5,000 miles away,” English nods.

“We ring each other once a week. I sent videos of my training, Steve checks out my form, how I look.

“We go through the video and can break it down in slow motion if we need, look at my flow or whatever.

“It is unique. It does take a certain type of athlete. You have to have the drive – and mine is very strong.”

English is a complex character, but his desire as he heads for Scotland is clear.

The Letterkenny man, who is nearing competition of medicine studies at UCD, has had enough set-backs to last a lifetime.

In 2016 – an Olympic year – English fractured his fourth metatarsal in a pothole outside UCD.

“That was quite frustrating,” he says of an injury that arrived a week out from the World Indoors.”

English slept in an altitude tent as the Olympic Games came into view.

As fate would have it, the draw in Rio wasn’t kind.

He got out of his heat, but was eliminated in the semi-finals. Others to make their exits in the same semi were Kszczot and Ayanleh Souleiman.

“I came around okay and was quite happy with how I did at the Olympics,” he says.

“It just worked out that I had the toughest semi-final.

“Kszczot didn’t even qualify and he’s the most consistent 800m runner of the last decade.

“I got back training early and wanted to make amends. That was in my mind.”

A nerve problem in his back, brought on by a bulging disc, hit him hard in 2017 and reduced his power output in his left rear-chain and had flexion issues in his angle.

“I worked on those things and kept punching in my long runs, too,” says English, whose focus never dimmed.

“It’s not been hard to keep going. I was motivated to get back to the stage again. I never lost my motivation at all. Life plays out and athletes get injured. You just have to deal with it.”

“The Irish record is important to me,” he says.

“At the end of my career, I’d like to look back, be a double Olympian and hopefully have the Irish record.

“It’s not an easy feat. It’s quite a strong record. He was a very good athlete. I’d love that record, though.”

But for the matter of inches, English would already have been a double Olympian.

He was 0.17 seconds away from qualifying for the 2012 Olympic Games in London. Instead, he watched from a vantage point high in the Olympic Stadium as Kenyan sensation David Rudisha won gold in 1:40.91 – a new world record.

“It would have been nice to have London, but it doesn’t bother me,” English says.

“If I had become an Olympian that early, I could have lost my way a bit. Maybe I’d have thought I achieved something and possibly not gone on to win those medals.

“I had tickets for the Olympic final and watched it from the top tier. I’ve been asked if it was inspiring or deflating – it was neither. I was there just in awe of what he did.

“The senior ranks seemed so far away and I had so many more things to achieve yet.”

English’s talents have been obvious for so long now. In 2010, he won gold at the European Youth Olympics. When he came second to Rudisha at a Diamond League meet in New York in 2014, some of the world’s top athletes were shooting the breeze after the race.

English happened to overhear Duane Solomon as they made their way back to the athletes’ hotel: ‘I don’t know who that guy was’.

A wry smile crossed his face.

At a point in time, jazz was the music of choice pre-race. Now, the very different beats of Avicii and Martin Garrix come through the headphones. It’s not uncommon for a bit of U2 or The Beatles to interject either mind you.

There have been plenty of experts queuing up for a pop at English in the years since he medalled at the 2015 European Indoors.

“I don’t think the majority of people cast me aside,” he says.

“The majority respect and remember what I’ve done. I’m over the injury and I’m looking forward to Glasgow…”

His mind goes to this weekend and the wonder of what the future holds once the gun goes.

English goes in Friday’s heats and hopes to book his place in Sunday’s final.

“The top six are all under 1.47. When I won the medal, there were only three people under it. The competition is a bid stiffer. It definitely won’t be easy, but it’s a bit of a coin toss really.

“I want to go and beat a lot of those guys who have beaten me before. I have a score to settle with certain people.

“I’m a strong competitor and I know I’ve done everything I can do since I had the biomechanical assessment.

“I’ve stuck consistently to the plan and I haven’t missed a day. If I go and don’t medal, I know I’ve given it my best shot.”