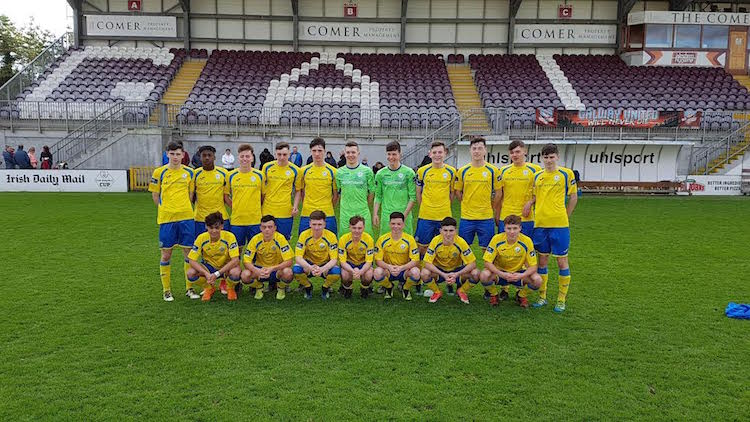 The Harps U17s squad will begin their National League season this Saturday when they host Shelbourne at the Club’s Academy’s grounds in Killygordon (kick-off 2.00).

Manager Declan Boyle did a tremendous job with the U17s squad who did that historic League and Cup double.

Repeating that feat would be unbelievable but and Boyle acknowledges that is a long shot.

The Harps boss is expecting a tough test against a Shels outfit that drew at home with his side and then his boys went and won in Dublin last season.

“Last season we drew 2-2 at home and beat them away. Our record at home against them has been good.

“I don’t know that much about their new players who came into their squad. It’s our first match and it’s at home so hopefully, we’ll get the three points.

“We’re looking for a good performance and to carry on from where we left off last year,” he added.

“It’s a big task, it will take a lot of motivation, and a lot of energy and effort but we’re hopeful that we can put on good performances throughout the season.

“I’m not expecting an easy game. It will be a hard match but I am looking for a good performance from our players.

“It’s our first game of the season and it’s at home so there will be a lot of pressure on us. We’re looking to go out, control the game and hopefully get the three points.”

With some of the players who were involved last season moving into the U19s squad and having a few injuries, Boyle says the starting line-up is not set in stone.

He said: “We have a strong nucleus from the players we had last year. You’re adding to that eight players from last seasons’ U15s.

“Three of them are internationals, so it’s looking good.  It’s also been a good week in training and the boys are doing well.

“We do have a few niggles and injuries but we have a strong squad of twenty players and it will give an opportunity for players to come and show what they can do and even cement themselves a spot in the line up,” Boyle added.

“We went down to Castlebar to play Galway and drew 2-2. Performances in games and training obviously affect line up selection.

“I have a good idea on the lineup but we will have to wait and see on some of the players who are injured. We won’t know until we have a look at them and assess their injuries.

“A good standard of players have come in. All players have areas of weaknesses and strengths, as I said, we have development plans for the whole season.

“They’re also good enough to realise what the areas are and work on it themselves.”

The young Harps squad ended the season in excellent form as they won both the National U17s League and the Mark Farren U17s Cup.

Boyle and his coaching staff have set high goals for this season but the manager knows equalling last season’s accomplishments will require a great deal of work.

“It’s going to be difficult, that’s for sure. We won the double last year. That has never been done by a League of Ireland club before at U17 level.

“The question is can we repeat that performance?

“If you’re a betting man, you’ll probably say no. With that in mind, we will take it one step at a time. The goal is to get to the latter stages of the competition which means getting into the top four of the league and to get the semi-final of the cup and we’ll see what happens after that.

“It does depend on the draw and other things like that. You do need a bit of luck like we had last year, we got two draws at home, the league and cup final which really helped, it makes a big difference.

“Our goals are set, we’ll take each step as it comes and see what happens then,” Boyle explained.

“We have an improvement plan for everyone really, that includes the coaches and players alike. We need to work on our weaknesses but also our strengths.

“We want the players that are with us this year to be better players come this time next year, that’s the overall goal for everybody involved.”

Last season’s captain, Daragh Ellison advanced up the pathway and signed with the senior team under manager Ollie Horgan.

Boyle is delighted by this and is adamant the youth pathway is the only way to go.

“We need that pathway for local kids, especially lads from Donegal. We need to work the pathway from the start up to the senior team.

“Ollie would know this more than most. It’s hard at times to persuade players to come up to the north-west so we need to be developing our own players.

“We have to give these players the opportunity because staying at Harps with a long term view in mind is the only way we can do this.

“We have boys from all parts of Donegal and they bring support with them and that brings a lot more supporters to the club and the players.”

Boyle has brought in eight players from last season’s U15 squad which was coached by Kevin McHugh.

“We have 12 players who were with us last season which makes the transition for the younger boys and the squad as a whole a lot easier.

“It means these players know what is expected of them, most of them if not all will know the coaches and again, it makes it a lot easier.

“It worked well in previous seasons, I do see a big advantage on it but it does mean that you might be playing a side that has all older players but again, at the end of the day, it’s all about the development.”