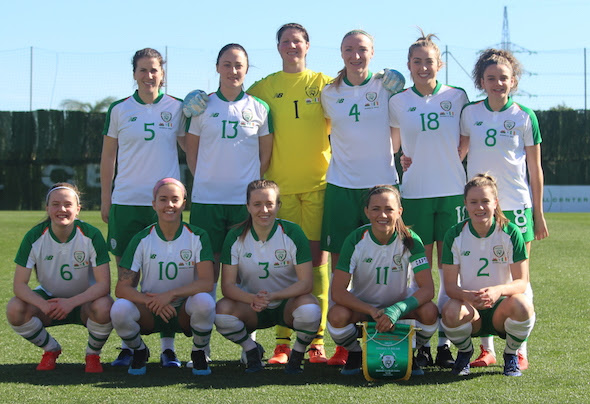 written by Stephen Maguire March 1, 2019
Donegal’s Tyler Toland and Amber Barrett both took the field at the Marbella Football Centre as the Republic of Ireland played out 0-0 draw with Wales in Spain. Ireland WNT 0 Wales WNT 0 Ireland were the better side throughout the first-half with a number of chances as captain Katie McCabe fired narrowly wide after a great run from Kiernan in the 10th-minute. The famous Campbell long-throw was a constant threat for Ireland and it almost created a goal for Colin Bell’s side with five minutes remaining in the half. From the right, Campbell arrowed a throw towards Louise Quinn who flicked the ball narrowly over the bar. Minutes later, Campbell was taken off as a precaution on her international return, replaced by Claire O’Riordan. Peamount United striker Amber Barrett was also introduced after the break and should have put Ireland ahead in the 67th-minute. The impressive Denise O’Sullivan turned and threaded a wonderful pass through to Barrett who raced on goal but under pressure from the goalkeeper Claire Skinner, she placed the ball narrowly wide. The Donegal-native was in the action once again with just two-minutes left on the clock. She held the ball up brilliantly for O’Sullivan who placed captain McCabe in behind, but after she turned inside and out, she shot narrowly wide of the left-hand post. The match finished goalless with the second international friendly between the two sides set to take place on Tuesday, March 5 in Marbella, Spain. “I thought it was a really intensive match with both sides going for the victory,” said WNT Head Coach Colin Bell. “We had to settle in the first-half and had some great aspects to our play, but I thought we dominated the second-half and should have won the game in the end. We created some great openings but couldn’t get the goal our play deserved. “The players have put in an extraordinary amount of effort throughout the game, especially with the heat, so overall I’m really happy with the result. Wales are second seeds in their group so we’re testing ourselves and playing well against these sides. “We kept a clean sheet and we go into Tuesday’s match obviously looking to win the game but knowing what we’ve got to work on to get the result. We’ll recover and do the work in training, especially on our set pieces, and go again Tuesday.” The two sides will meet again on March 5 at Estadio Municipal de Marbella at 12pm. Republic of Ireland: Marie Hourihan (GK), Megan Connolly, Louise Quinn, Megan Campbell (Claire O’Riordan 42), Heather Payne, Harriet Scott, Niamh Fahey, Tyler Toland, Denise O’Sullivan, Katie McCabe (C), Leanne Kiernan (Amber Barrett 58). Wales: Claire Skinner (GK), Gemma Evans, Sophie Ingle (C), Angharard James (Kylie Nolan 54), Kayleigh Green, Jessica Fishlock, Natasha Harding, Cori Williams (Rhiannon Roberts 71), Hayley Ladd, Ffion Morgan (Loren Dykes 37), Emma Jones (Grace Horrell 54)R
Tyler Toland and Amber Barrett play as Ireland WNT secure goalless draw with Wales in Marbella was last modified: March 1st, 2019 by Stephen Maguire
Tags:
Ireland WNTLadies soccersoccer