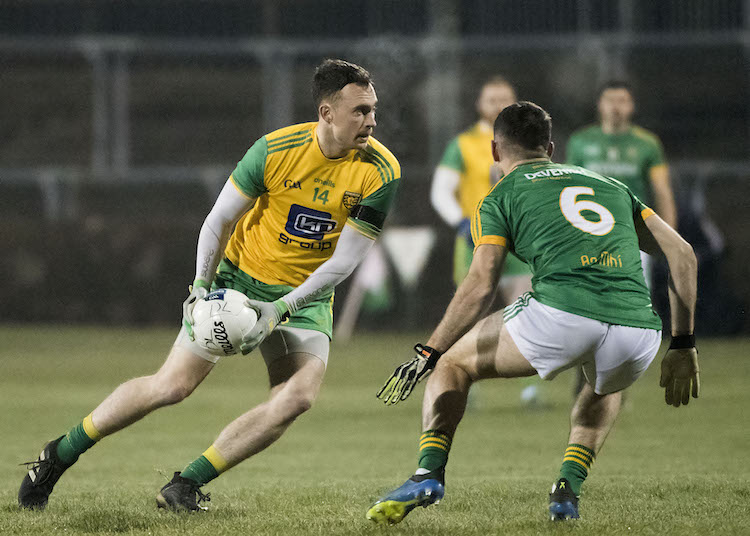 Martin McElhinney has withdrawn from the Donegal senior football panel.

The St Michael’s man informed the Donegal manager, Declan Bonner, of his decision in the wake of Saturday night’s Division 2 win over Armagh in Ballybofey.

McElhinney made his 100th Donegal appearance in this year’s Dr McKenna Cup against Cavan.

In all, he made 104 appearances in the county colours since his debut, under Brian McIver, in 2007.

In this year’s League, McElhinney made substitute appearances against Clare and Tipperary and played 45 minutes of the win over Meath in Ballybofey last month.

McElhinney – an All-Ireland winner in 2012 who also won four Ulster titles as a Donegal player – was an unused substitute in Donegal’s last two games against Fermanagh and Armagh.

Bonner was unavailable for comment when contacted this morning on McElhinney’s departure with the Donegal boss set to hold his next press briefing next week.

Earlier this year, McElhinney told how he believed the current squad was the best he’d been involved with.

“There’s loads of competition this year in fairness and it’s a very strong squad there — probably as strong a squad as I have been involved in,” the 30-year-old Creeslough man said in January.

“There are boys that can come in at any position. Nothing is set in stone so that’s why I think it’s the best squad yet and there’s still a lot to come back in.

“There’s loads of opportunities there for fellas so it’s just a matter of putting your hands up there and taking it when you get a chance.”