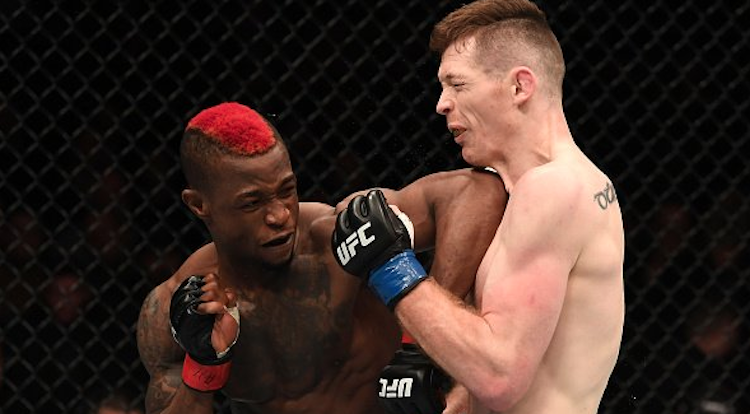 Joseph Duffy was unable to recover from an early takedown as Marc Diakese ended a three-fight losing streak at The O2 in London.

Diakese picked up a valuable and much-needed win, via a deserved unanimous decision, claiming a 30-27 verdict on all three scorecards.

Duffy was down in the first round from a kick to the calf and the Donegal native appeared to be in trouble form then on.

Duffy’s lead leg seemed to be causing the Rosses man some angst and he took to southpaw stance for the remainder of the bout.

Duffy did get up to recover, but was sent down again by a left elbow from Diakese.

Diakese, celebrating his 26th birthday, was coming back to action after three successive defeats.

Losses to Drakkar Klose, Dan Hooker and Nasrat Haqparast hindered his progress following a KO win over Teemu Packalen in London two years ago this weekend.

Those defeats meant that the previously undefeated Diakese had his UFC future potentially on the line at the O2 Arena.

The Congo-born ‘Bonecrusher’ was out quickly in the second stanza and was well on his way to victory by then.

Injury had side-lined Duffy after a second round TKO loss to James Vick 16 months ago in New York.

Beset by shoulder and rib injuries over his period out, the 31-year-old Duffy endured a frustrating spell.

The Tristar fighter closed in on Diakese during the second round, but a cut to his left eye confirmed that he was playing second fiddle.

Duffy, sensing that he needed a big finale, began to aggress, but Diakese took him to the floor again, having started the third round with a stylish high kick that just missed the target.

Diakese’s dominance was outlined with the 29 ‘significant strikes’ he landed in the third round alone.

“It means everything,” a tearful Diakese said, barely able to get the words out to octagon interviewer Dan Hardy.