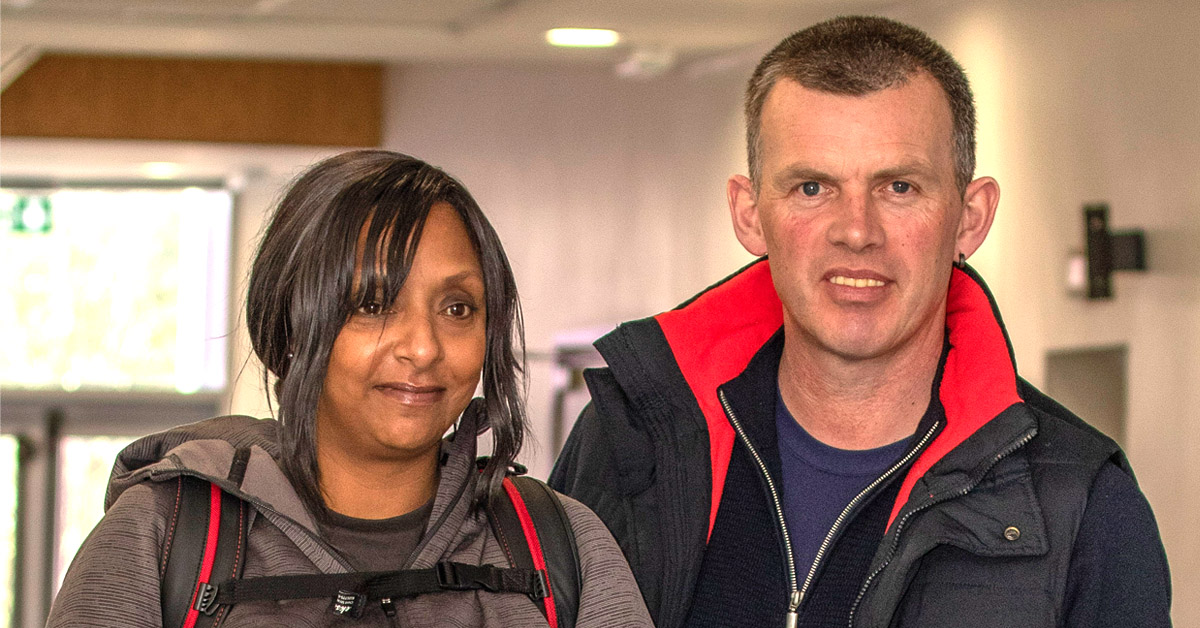 Donegal gets behind Anita’s amazing journey

A woman who is making great strides in her mission to walk again has received an outpouring of support from the Donegal community this week.

Anita Jackson, aged 42, suffered a life-changing spinal injury from a horrific fall on what was meant to be the holiday of a lifetime in Kenya.

Anita and her partner Manus Gallagher, 48, from Burtonport, were on a dream trip exploring Anita’s birthplace in 2016.

But disaster struck on the first day as Anita was moving a sunbed and lost her balance, falling 8ft from a deck onto the beach below.

“I was going to move a chair and I lost grip,” Anita recalled. “I remember so well trying to balance on anything I could, but I fell. It felt like I was falling forever.”

“When I landed I looked at my legs and they were in a really weird position. I tried to stand up and I realised that they wouldn’t budge. I knew that something was wrong.”

The force of the fall resulted in a burst fracture of Anita’s T12 vertebra and an incomplete spinal cord injury.

“I just remember screaming and crying in pain and begging for painkillers,” she said.

Anita underwent emergency surgery and spent three days in ICU before being airlifted back to London, where she and Manus lived at the time. A long and painful road of rehabilitation lay before her, with some doctors claiming she would never walk again. 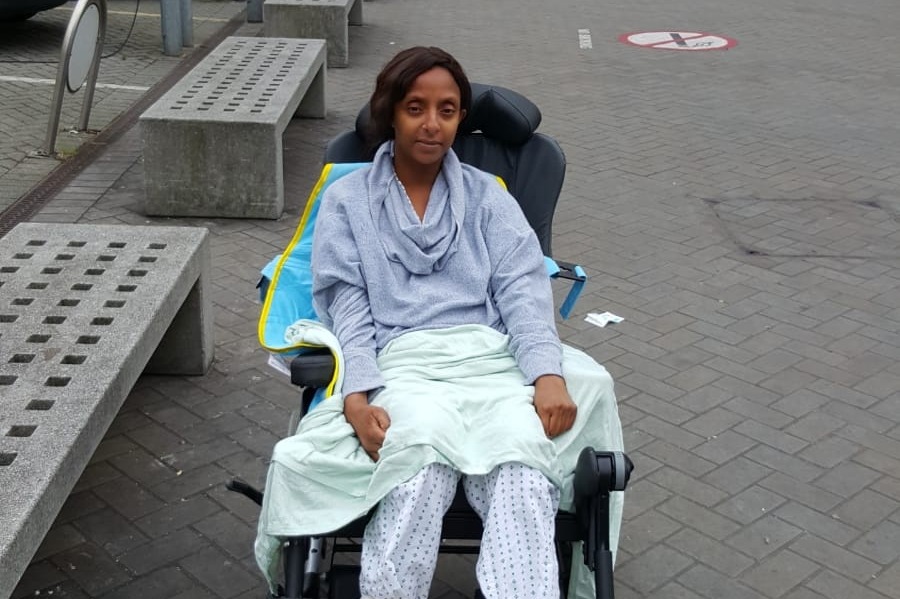 Anita Jackson after the accident

But the brave and strong-willed woman has found a way of getting back on her feet with the help of the people of Donegal.

Life in London became difficult after Anita was discharged from hospital, so they decided to move to Manus’ homeplace in Burtonport.

“We didn’t know what was going to be ahead of us but we were sure of one thing. We would have the family support,” Manus said.

Fortunately for Anita, the No Barriers Foundation was being set up in Donegal at the same time. The Letterkenny-based non-profit organisation had bought a robotic exoskeleton to provide world-class rehabilitation for people in the north west who have partial paralysis or limited mobility.

For Anita, the Ekso Bionics suit meant that she would walk again with assistance – something she never thought would be possible in London. 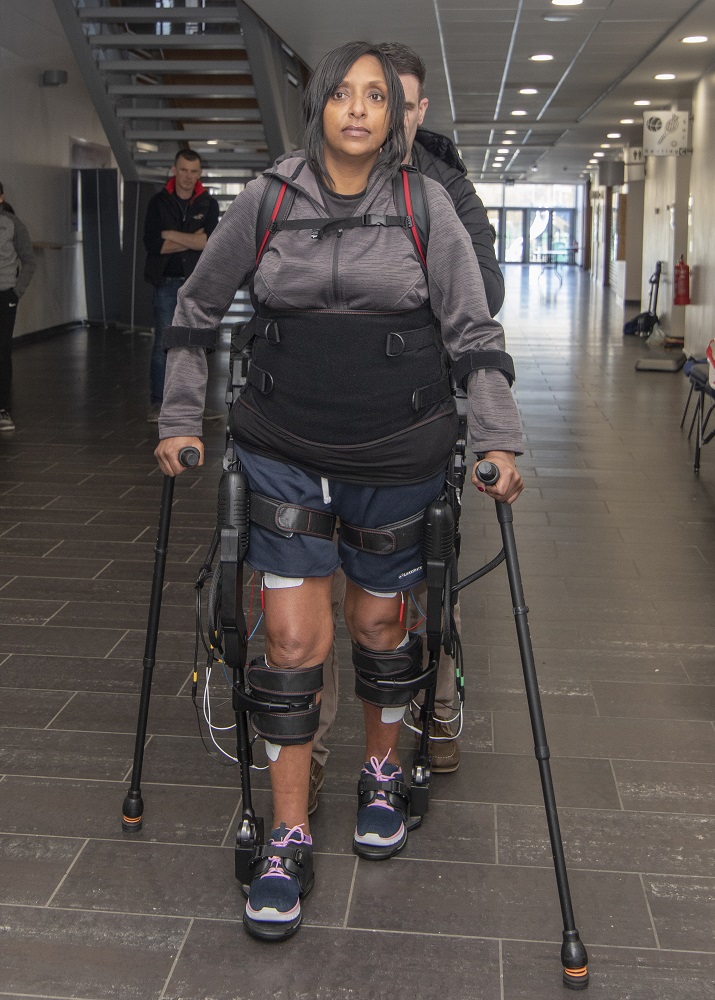 Anita now travels to Letterkenny to walk for two hours a week with specially trained No Barriers physiotherapists. She has clocked up over 68,000 steps in the suit, with Manus cheering her on every step of the way.

Through the revolutionary Eekso therapy, Anita has also found strength, happiness and hope.

“Having the exoskeleton has been the best thing ever,” she said.

“Getting up, standing and walking has made me more positive. For that one hour I’m on cloud ten!” 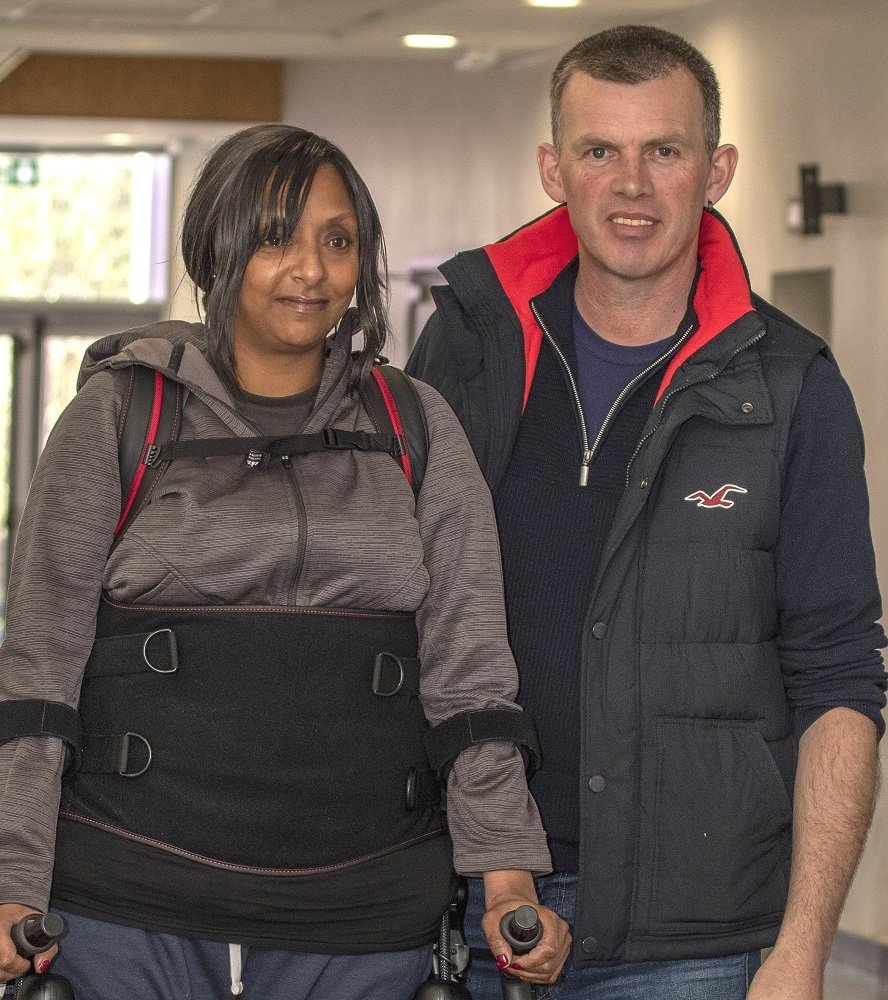 Anita compliments her walking therapy with the use of a Motomed machine at home. This leg and arm trainer has also shown major results during her rehab journey.

“I was cycling on the Motomed one day and it went berserk, making noises and it came up on the screen to say I was cycling on my own. I couldn’t believe that my legs were doing the work,” she said.

Anita is keen to build on this recent success, however, the Motomed is loaned to her by the HSE on a three-month rotation, meaning that she has it for three months before it is provided to another patient.

“Everything I’ve done in those three months just goes backwards then. You lose everything you’ve been building,” Anita said.

As Anita makes great progress, Manus decided to set up a GoFundMe appeal to raise €4,400 so she can have her own Motomed Vita 2.

The couple were blown away by the support for the campaign, which has raised almost €4,000 in just one week.

Anita said: “I’m so shocked and so grateful for how great people can be. That has really uplifted me. It’s more like I’m getting energy from all these people.”

Anita also credits her progress to her positive mental attitude. She watches videos of other people who have recovered from spinal injuries to inspire her to achieve her own goal.

She said: “Your mind controls your body, so if you are positive, eventually your body will respond to that. I keep listening to that and seeing people who have done that.

“You need that hope and motivation.”

If you would like to support Anita’s fundraiser to purchase a Motomed Viva 2 arm and leg trainer, visit the GoFundMe page here: https://www.gofundme.com/anita-jackson039s-spinal-injury-rehab-fund

To find out more about the No Barriers Foundation, visit:nobarriers.ie