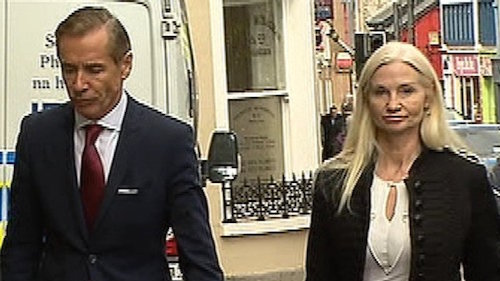 A wealthy Donegal businessman said he was left flabbergasted when a pony he bought in Co Sligo arrived at his home in Majorca.

Sean Ewing told Sligo Circuit Court that he had an agreement with Michael Kearins to buy two ponies – a grey and a skewbald – for his two daughters.

However, RTE reports that when the ponies arrived at the stables, the skewbald was a completely different animal to the one he and his family had viewed in Ireland.

The jury in the trial of Mr Kearins, who has pleaded not guilty to deception in relation to the sale of one of the ponies, was shown video footage recorded by the Ewings of Mrs Ewing and her daughters riding the pony known as Buddy at an arena in Claremorris, Co Mayo, prior to agreeing to buy both ponies.

Before the video was shown at Sligo Circuit Court, Mr Kearins’ barrister, Patrick O’Sullivan, told the jury that the defence completely accepted that the pony viewed by the Ewings in August 2012 was not the same pony sent out to Majorca; it was a different pony.

The pony viewed was a skewbald called Buddy, but the pony sent out was called Spot, he said.

Mr Ewing said that it was preposterous to suggest that they would have agreed to take a similar pony to Buddy.

They had gone to view him three times because safety was of the utmost importance to him and his wife in relation to their daughters, who aged were eight and ten at the time.

They wanted to ensure that the temperament of the pony was suitable for children and he said they had gone around Ireland looking at ponies because it was critical to them to get it right.

Mr Ewing detailed the physical differences between Buddy and Spot and said that while Buddy was muscular and athletic, the pony they got was frail, looked undernourished and was certainly not fit.