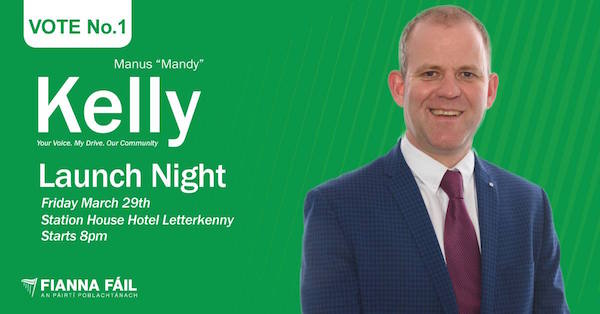 The Glenswilly native has been officially added as a third candidate on the Fianna Fail ticket.

The Letterkenny-based businessman received the backing of outgoing FF councillor, James Pat McDaid, who is stepping down after his five-year term due to work commitments.

Confirming his decision to seek election in May, Mr Kelly said he was looking forward to the challenge.

“I feel the time is right for me now to make the step into the political arena. I’m really looking forward to the campaign and to working with my party colleagues who have been a great source of support to me,” he said.

Manus is having the official launch of his campaign this Friday night the 29th of March in the Station House Hotel in Letterkenny at 8pm.

Minister urged to ‘Tell families they do...

Mica: ‘What families are being put through...