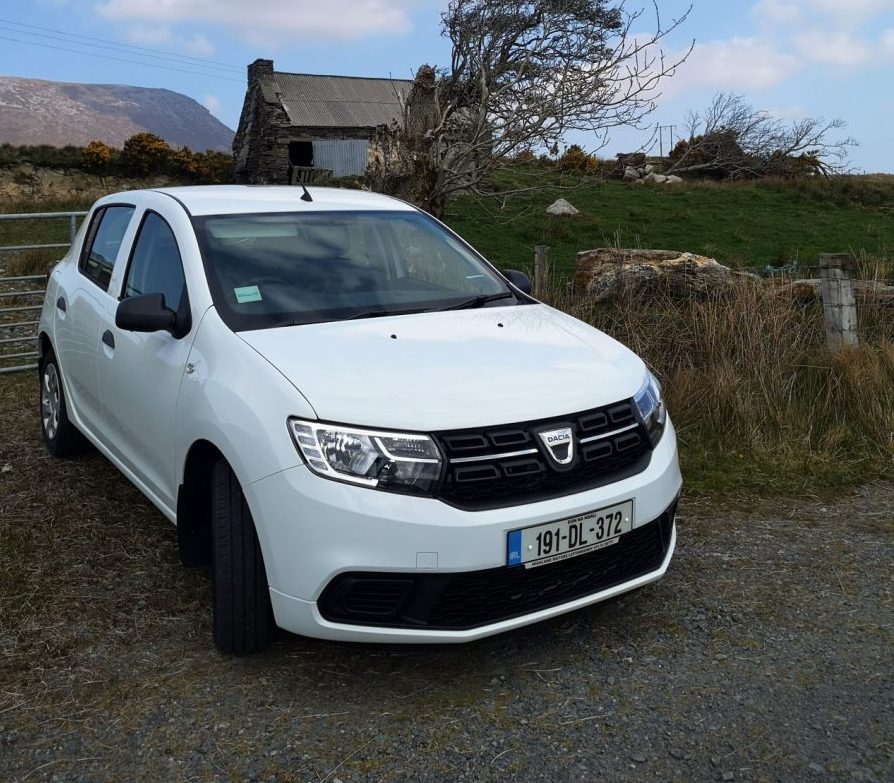 This week Donegal Daily’s motoring expert Brian McDaid takes you on an adventure in the Dacia Sandero.

The brochure says you will get €10 change from twelve grand for a brand new car.

A double check to see what year this information booklet was printed followed up by a second opinion, through Google and the news, was still good that you can still buy a new small family car going into the year 2020 for just €11,990.

The brand is Dacia and the model is entry their range in the Sandero.

A view of the Sandero that we tested this week courtesy of Highland Motors. Photo Brian McDaid.

I feel as I have been here before and I can trace the DNA of this car back to an ancestor of its past.

The Sandero may look nothing like the car I’m thinking of but this small engined family car reminds me a lot of principals the Renault 4.

The first of the Renaults had a 747cc engine in it.

We had on in the late 1960s which was very quirky at the time compared to the normal family cars in Letterkenny.

The first of the Renault 4’s which we one owned many years ago.

The giant European car maker Renault are making the Sandero and distributing the range in Ireland. The Dacia Duster made a great name for itself as an SUV extremely well priced starting at under the €20k.

Back when we had our Renault 4L, which was the base model in the range, it had sliding windows and a gearstick in the middle of the dash.

This car was the first front-wheel drive family car that Renault ever built, it had three studs on every wheel compared to four on other cars, and as my father said it would run on a sniff of ‘regular’ petrol back in those days.

The Sandero parked along the same roads that we travelled along years ago in our old Renault 4. Photo Brian McDaid.

That was important to us as a family not because of the developing oil crises but because times were very tight in our house and an easy run car served our immediate day to day budget rather than any bigger environment worry back then.

This week we were out on the roads in Donegal in the Dacia Sandero. There is three engines to pick from the 1.5 diesel a 900cc turbo petrol and the 1000cc petrol model that we tested.

Our Sandero was the entry model. The first thing that you realise once you sit in the Sandero is the amount of room available for a car that looks quite compact from the outside.

The Sandero at Muckish along the same roads that we travelled along years ago our old Renault 4. Photo Brian McDaid.

Every so often you can hear the offbeat sound of the three-cylinder petrol engine. It’s progressive to drive and is very comfortable and not laboured when drove at or below the national speed limit.

That familiar remote control on the steering column which Renault owners would be very familiar is straight forward and simple to us to adjust the volume and change the radio stations.

You couldn’t have enough charging points on a car these days and this Dacia Sandero has a 12v charge for both the front and back passengers and also has a USB point on the radio.

Driving this Dacia, the suspension is a bit softer than normal, which is great to absorb the ever-changing road surface in Donegal.

The Sandero has a very functional theme and feel to it.

A view of the Sandero that we tested this week courtesy of Highland Motors. Photo Brian McDaid.

It simply gets on very well with the job of transporting someone from A to B with the least amount of fuss.

The secrets in the pricing

The road forward, from an environment point of view, is aimed towards low emission petrol engines or electric power.

It’s not that long ago that diesel was the signpost that we were supposed to follow for a lower carbon footprint.

Even though the Sandero will still have a big slice of its price going to the tax man, it will have a slice of pie half the size of a car, that is twice its price respectively, to hand over in taxes.

If its the future of the environment that is the reason you are considering buying this very full efficient 1000cc Sandero, or it simply down to your budget, the Sandero gets you on the road with a good warranty without the worries and pressures of spending the same amount on an equivalently priced second-hand car.