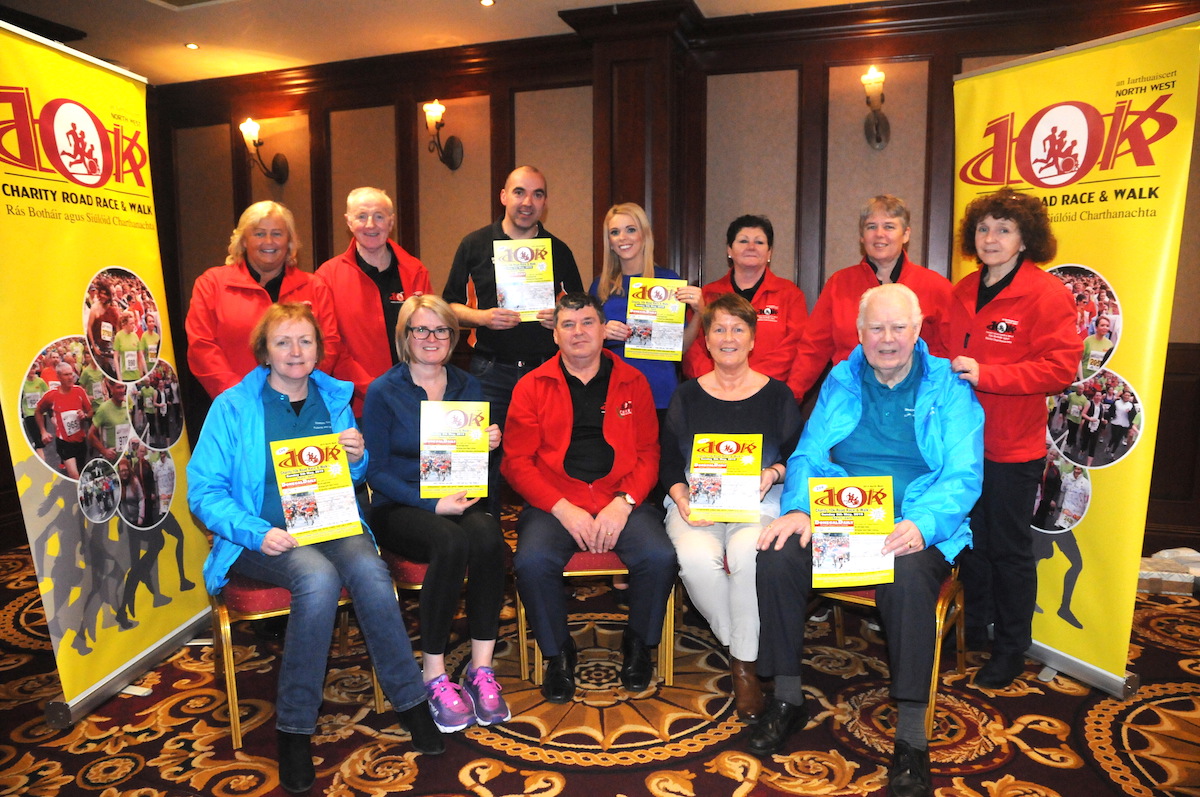 Organisers of the North West 10k is encouraging people from across the county and further afield to come out next Sunday (May 5) and support the 23rd North West 10K.

The race is set to benefit three charities Spina Bifida & Hydrocephalus Ireland Donegal Branch, the Little Angels Association and Donegal Cancer Flights & Services, who have all been doing outstanding work across Donegal.

The 23rd North West 10k Charity Run and Walk takes place next Sunday the 5th of May in Letterkenny with a 2pm start on the Pearse Road near the Community Centre.

Since the first staging of the charity event in 1997 it has raised close to 800,000 euros for over 30 charities. Neil Martin says there has been a very positive response to the charities with encouraging on-line entry numbers already registered.

“We have had a really good on-line entry already for next Sunday’s Charity Run & Walk but we want to see those numbers increase during the week to make it a really special event for everyone involved but most especially for our three charities this year Spina Bifida and Hydrocephalus Ireland Donegal Branch, the Little Angels Association and Donegal Cancer Flights & Services.

“These three organisations have put in a huge amount of work with various fundraising initiatives over the past six weeks and it would be really great now if we could get a huge turnout of runners, walkers and families entering to boost the cheques that we will be able to present to them next month,” Martin said.

The North West 10k has been a hugely successful charity event with hundreds of the same people coming back year after year to support very worthy causes and take part in a massively popular community event.

“The North West 10k is a unique event here in Donegal.

“There is always a great build-up to it and on the day it is a great social event that brings people together for a couple of hours in the heart of Letterkenny.

“Coming up to 1pm next Sunday you will see the Community Centre Car Park filling up which is a great sight and makes the work of our hard-working committee so satisfying.

“Runners, walkers and families are mingling and talking before they are called to the start line on the Pearse Road.

“Family and friends are out along the route supporting the runners and walks. The fact that a good part of the 10K is in the town of Letterkenny adds to the atmosphere.

Then back at the finish line at the Community Centre as the runners and walks come in there is an atmosphere that really would do your heart good,” Martin added.

“There is no change to the route this year and as always the committee is appealing to motorists to be patient and obey the instructions of the Gardai and stewards who will be there volunteering to ensure that the event passes off safely.

“The North West 10k will have huge numbers taking part and the top priority is to ensure that it passes off safely.

“There will be some disruption to traffic flow for a couple of hours so we’d asked motorists who have to travel through Letterkenny to leave plenty time for their journeys.

“Please be patient and comply with the instructions of our stewards and the Gardai. We would just ask the general public to remember that the 10k is taking place to help three very worthy charities.”

Neil Martin also acknowledged the support of the five sponsors who are backing the 23rd North West 10k. “Without the backing of the five charities DonegalDaily.com, Brian McCormick Intersports, Century Cinemas, the Value Centre and the Mount Errigal Hotel.

“It simply wouldn’t be possible to stage an event of the size of the North West 10k. Century Cinemas, the Value Centre and the Mount Errigal Hotel have come on board for 2019 while we have had DonegalDaily.com, and Brian McCormick Intersports for a number of years.”

On-line entries will be taken up to Friday at www.northwest10k.com. A registration office will also be opening at a Marquee beside Letterkenny Community Centre on Thursday and Friday evenings from 5-7pm and on Saturday 3-6pm.

The first 1,500 entries will get the new North West 10k T-Shirts. Runners and Walkers who have entered on-line can also pick up their numbers and T-Shirts at the registration office during those opening times on Thursday, Friday Saturday.

Registrations will also be taken on Sunday morning from 10am till 1pm.