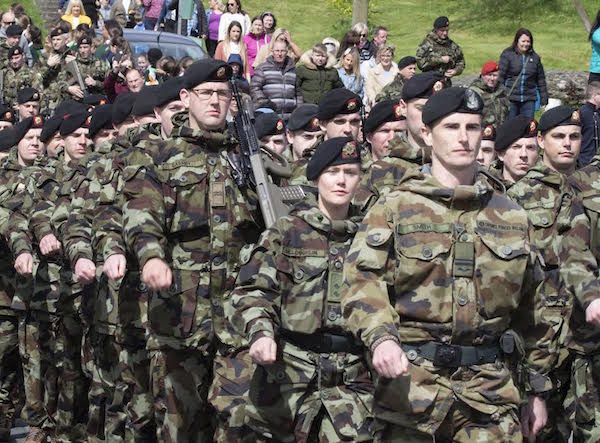 The Minister for Defence has promised that the Government will act “swiftly” on the issue of pay and conditions with the Irish Defence Forces once a report is received in the coming weeks on the issues.

Minister Paul Kehoe was speaking as he carried out a review of the 114th Infantry Battalion who are due to leave on a six-month deployment to South Lebanon shortly.

Hundreds of people turned out in Letterkenny, to see the review which took place on the playing fields of St Eunans College.

Afterwards, more than 400 soldiers marched to the town to the delight of hundreds of schoolchildren waving flags.

Minister Kehoe used the occasion to address the issue of pay and conditions within the force.He said he wanted to be frank and honest about the situation and admitted that it was not an easy situation to resolve.

“My Department, in conjunction with Military Management, has been working round-the-clock for months now to address these issues.

“This work has also involved the two representative bodies, PDFORRA and Raco, who are the two official and recognised associations tasked with advocating on behalf of members of Defence Forces members.

“It was on my request that the Government tasked the Public Service pay Commission with examining challenges being experienced in recruitment and retention.

“Written submissions have been made by all the above parties and both the Chief of Staff and the Secretary-General in my Department have made a joint verbal submission.

“I can inform you today that I am expecting that report in the next few weeks and the Government will act swiftly once it is received.”

“Together, and I know the Chief of Staff and the Secretary-General will agree with me, we are working proactively and diligently to ensure that the role of the Defence Forces personnel is fully appreciated and that the challenges in recruitment and retention are understood.”

He said this required a range of actions but that the well-being of the Defence Force members are his priority.

He added “Let us be honest, however. There are no easy solutions. If this was easy we would have already solved this issue and the solution requires a range of actions.

“However, I will continue to address the issue in support of our defence forces personnel.

“Moreover, as Government makes decisions on issues of public investment and expenditure, let me assure you, ensuring the safety, security, welfare and the well-being of our Defence Forces is, and will remain, my top priority. And I will ensure that we secure the necessary resources to this end.”

The deployment of the 114th Infantry Battalion will see 450 troops rotate to South Lebanon in what is Ireland’s largest overseas deployment to a single mission area.

The Irish Battalion will be comprised of 450 Irish army, naval and air corps personnel.The unit will also include ten soldiers from the Armed Forces of Malta (AFM).

This will be the second rotation of AFM personnel with Irish troops to Lebanon.

There was a carnival feel to today’s events with schoolchildren and families all attending the event.

It was a very special occasion for Lt Col Paul Kelly from Letterkenny who will be the Officer Commanding the 114th Infantry Battalion in South Lebanon.

He paid special tribute to the families and loved ones left behind while they travelled on their tour of duty.

“No mission overseas can thrive without the continued support of our loved ones, families and friends at home. Military service and particularly overseas service is a sacrifice that is borne hardest by those we leave behind.

“I know that I speak on behalf of the men and women of this unit when I express my sincere appreciation for your support, thoughts and prayers when we are deployed abroad.

“Finally, I wish to express my gratitude to all the soldiers of the 114th Infantry Battalion for their continuing service and loyalty to the state and to the cause of peace and wish every one of them a safe and successful tour of duty,” he said.

Among those who also attended the ceremony was Minister for Education Joe McHugh as well as local county councillors.

Donegal salutes soldiers as Minister promises “swift action” on pay and conditions was last modified: May 7th, 2019 by Stephen