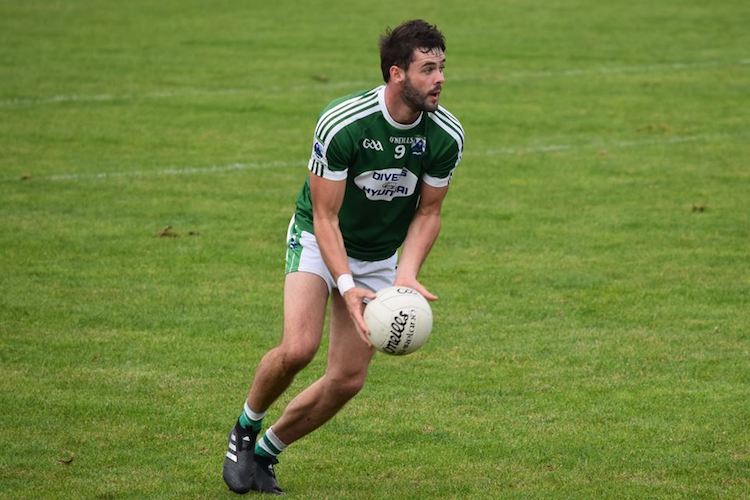 written by Chris McNulty May 5, 2019
FacebookTweetLinkedInPrint

Odhrán Mac Niallais delivered a reminder of what Donegal fans will be missing this summer as he fired Gaoth Dobhair past Termon and into the Comórtas Peile na Gaeltachta final.

By Chris McNulty in Magheragallon

Mac Niallais curled over six points in the last 16 minutes and was the big difference down the home stretch.

Mac Niallais bent over two identical scores from the left flank that showed his class as Gaoth Dobhair booked a spot against Kilcar in tomorrow’s final.

Three frees from the 26-year-old were key as Gaoth Dobhair began to creep away and MacNiallais hit six of his side’s last seven points.

Gaoth Dobhair didn’t score until the 22nd minute and were 1-3 behind at that stage, but they soon found their gears.

The teams were level three times in the second half before Gaoth Dobhair – who saw Niall Friel rattle the net in the first period – hit their second goal in the 42nd minute.

Peter McGee fired against the crossbar after Eamon McGee put him through, but Cian Mulligan finished from the rebound.

A brace from Mac Niallais – who has recently confirmed that he won’t be returning to the Donegal colours for their assault on the Ulster Championship – saw Gaoth Dobhair hold sway.

Daire McDaid – who ended as the game’s top scorer with 1-6 – finished to the net from close range after Christopher Sweeney, the Gaoth Dobhair goalkeeper, didn’t hold onto a high ball.

A monster free by Enda McCormick meant that Termon were just one in arrears heading into the final quarter, but that was the cue for Mac Niallais to take centre stage.

McDaid popped Termon in front with a sixth minute free and he doubled the account soon after.

Having been denied by an earlier save from McDaid by Sweeney, Termon wouldn’t be stopped when Ricky Gallagher got played through by Aiden Sweeney in the 11th minute.

Sweeney broke the line and offloaded to Gallagher, who slotted to the bottom corner beneath the Gaoth Dobhair netminder.

The towering Gavin McBride might have got Gaoth Dobhar off the board, but he slapped against the post after getting his paws to a high ball into the mix.

Enda McCormick drilled over to put Termon six ahead with Gaoth Dobhair failing to trouble the scoreboard operator in the opening 20 minutes.

But Mervyn O’Donnell’s men hit back in style.

Cian Mulligan weaved his way in and teed up captain Niall Friel, who slammed past Michael Boyle.

The Termon goalkeeper was credited with playing a big role, as the team’s coach, in Gaoth Dobhair’s unprecedented haul of trophies, including Donegal and Ulster senior championship crowns, in 2018.

Gaoth Dobhair had been in need of smelling salts in the early exchanges, but when Ethan Harkin – who has made a mark over recent weeks – and Eamonn Collum hit points they were back to within a point.

Gaoth Dobhair were in the driving seat when Cian Mulligan and Friel – after Boyle saved from Collum – scored two in a minute.

Gaoth Dobhair were without Neil McGee, Daire Ó Baoill, Micheál Carroll and Odhrán McFadden-Ferry, who were with Donegal for a challenge game against Down in Tullylish this afternoon, while Kevin Cassidy was also absent.

Gaoth Dobhair were two ahead (1-6 to 1-4) at half-time when Harkin polished off a fine move that involved Odhrán Mac Niallais, Eamon McGee and Gavin McBride.