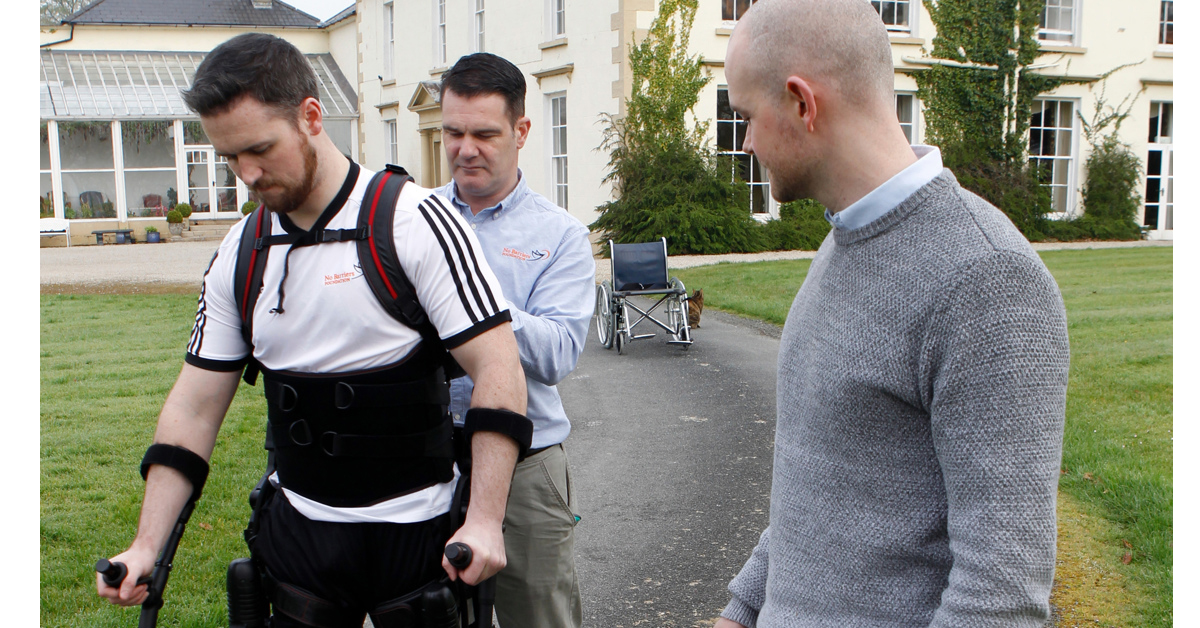 It doesn’t take much to spark a memory to life, be it good or bad.

The smell of acid spilt from a busted battery at a serious car accident of quietness and darkness of an intensive care unit.

The look that one human being can pass on to another, that things are not right.

Over the last year or so in my job as a photojournalist, I have covered the arrival of a new and very specialised piece of equipment.

I watched in amazement and with nervousness as people with spinal injuries or stroke patients were carefully helped from wheelchairs or walking frames and were placed into a frame that could be fully adjusted to suit before the patient is securely strapped in.

To watch someone rise from a sitting position to their feet, with the aid of this frame makes you think and appreciate how difficult a small action like standing up becomes so much more complicated with injuries of disabilities.

I still have two walking sticks at home, one of them belonged to my grandfather, Pop Coyle, who used it all of his life.

The walking sticks that which belonged to my grandfather and then my Auntie B also handy for directing traffic. Photo Brian McDaid.

His walking stick went everywhere with him in the car when he was driving his old red Opel Kadett, or hanging on the pew in front of him when he went to mass up until he died in 1977, in his 90th year.

Then the stick was modified and shortened when his daughter Bida Deeney needed two walking sticks to get about on.

Bida, who may have been weak in body, was strong in mind.

She was once the county goalkeeper for Donegal in Camogie.

So, the story was often told of a pushy motorist who wouldn’t let her cross the road in front of her home one day and then had second thoughts when she left the track of her fathers walking stick on the bonnet of his beautiful BMW.

For those who never meet Fr. Mark or Bida Deeney, I have inched a small clip of a video of the two of them at Fr Mark’s Golden Jubilee celebration to the priesthood, which was held in And Friary a good few years ago

Then at her husbands Miah’s funeral, Bida put on a brave face and weathered her sorrow, only to suffer from a stroke at the funeral meal after at Gleneany House.

Knowing that time was vital in getting medical attention, we lifted Bida, chair and all, and bundled her into my car and drove her to the hospital.

Even then she was looking for us to wheel her around and leave her down to the foot of the town instead of taking her to the hospital and causing any fuss.

After a long stay in both Letterkenny General and the rehab unit across the road in St. Conal’s Hospital, Bida still believed she would be able to manage at home on her own.

It worked for her mother who also suffered a stroke many years before and Bida gave up her job in the Model Bakery Shop on the High Rd to look after her wheelchair-bound mother, in the home house that was converted from a garage to have all its rooms on the ground floor.

A team from the rehab unit travelled down from the hospital with Bida to see if she could now manage on her own in her own home.

I can still remember one of the therapists checking me up when I went to slide the back of the wheelchair around to assist Bida to make it into her sitting room.

The house that Bida cared for her mother in now wasn’t suitable for Bida to manage on her own.

It was hard for a strong-willed person like Bida to accept, but in the long term it was for the best and Bida was lucky to get the specialised care she needed in St. Josephs Hospital in Stranorlar and also was able to continue the habit of a lifetime of getting to mass every morning where the late Monsignor McDyre was a regular celebrant.

In 2008 her brother Fr. Mark Coyle was involved in a horrific road traffic incident in which it was thought at the time he wouldn’t survive.

As a fireman attending the incident, I was trying to talk to Fr Mark (my uncle) before he became unconscious. Medics at the scene thought he wouldn’t even make it as far as the hospital and sent me back in the ambulance with him to Letterkenny.

At the hospital, the emergency doctor in charge advised me to start making phone calls as the team worked on him and his injuries in an effort to save his life.

Fr. Mark was induced into a coma and scans of his injuries were transported by taxi to Dublin.

The specialist spinal unit at the Mater Hospital sent word from Dublin to send Fr. Mark up.

Again, we were told that he might not survive the operations that they needed to do but they had no choice.

After a failed attempt where they had to abandon the operation because of other breathing complications, a second attempt they had success in dealing with his C2 fracture in his spine.

Four months into his stay in ICU and the high dependance unit in the Mater Hospital word come through that he might be going to the rehabilitation unit in Dun Laoire.

Sadly other complications were to ditch that possibility.

For all the injuries that he had suffered in the accident, this seemed to be the blow that was to hit him the worse much like his sister Bida a few years earlier when she got word that she couldn’t manage in her own at home following her stroke.

Fr. Mark who was strong in willpower and prayer tried to come to terms with the fact that his body was at the limit of what could be achieved for him.

The fingerpost on his journey to recovery change from Dun Laoire and pointed to Donegal and Letterkenny and the thought of getting home boosted his flattened batteries.

The sun blinded him the day he arrived back to the ward in Letterkenny General Hospital, I went to pull the curtains and I was stopped in my tracks, leave them Fr. Mark suggested.

I never thought I would see my home town again or the chapel spire so I’ll suffer a bit of sun in my eyes.

The rehab unit and the staff got Fr. Mark back on his feet, one of them even took a fishing rod into work with them and had the man who loved fishing casting a line out into the garden

An electric wheelchair was made to fit the dimensions of the elevator in Ards Friary, but we didn’t factor in my uncle’s enthusiasm to operate the new electric-powered wheelchair, resulting in him parking his chair on top of my foot as we took the elevator to a new development in his rehabilitation journey.

On the first evening, Fr Mark celebrated mass from his wheelchair in Ards a well-wisher come up to him after the service to wish him well and also for to get him to bless a few things that had bought in the shop.

One of them was a Padre Pio fridge magnet, somehow they doubled up as an immobiliser disabled his wheelchair on the altar and only after searching through the instruction book did we find the wheelchairs immobiliser to reverse the power of Padre Pio’s Fridge Magnet.

These memories this week from over a decade were rekindled when I was asked to cover a press conference to launch the No Barriers Foundation charity ball at Castle Grove House on the 8th of June.

Johnny Loughrey and his team from No Barriers Foundation as they demonstrate the robotic walking aid at Castle Grove County House Photo Brian McDaid.

Money raised on the night went to support the use of a state of the art robotic technology to help spinal injury, stroke, MS and brain injury victims, amongst others, to stand up and walk.

My story might be different to others that are going through an injury or illness of this type, but the work of the No Barriers team under the directorship of Johnny Loughrey has to be commended for the work they are doing and plan to do if their fundraising evening is a success.

DD Motoring: Road to recovery was last modified: May 9th, 2019 by Brian McDaid