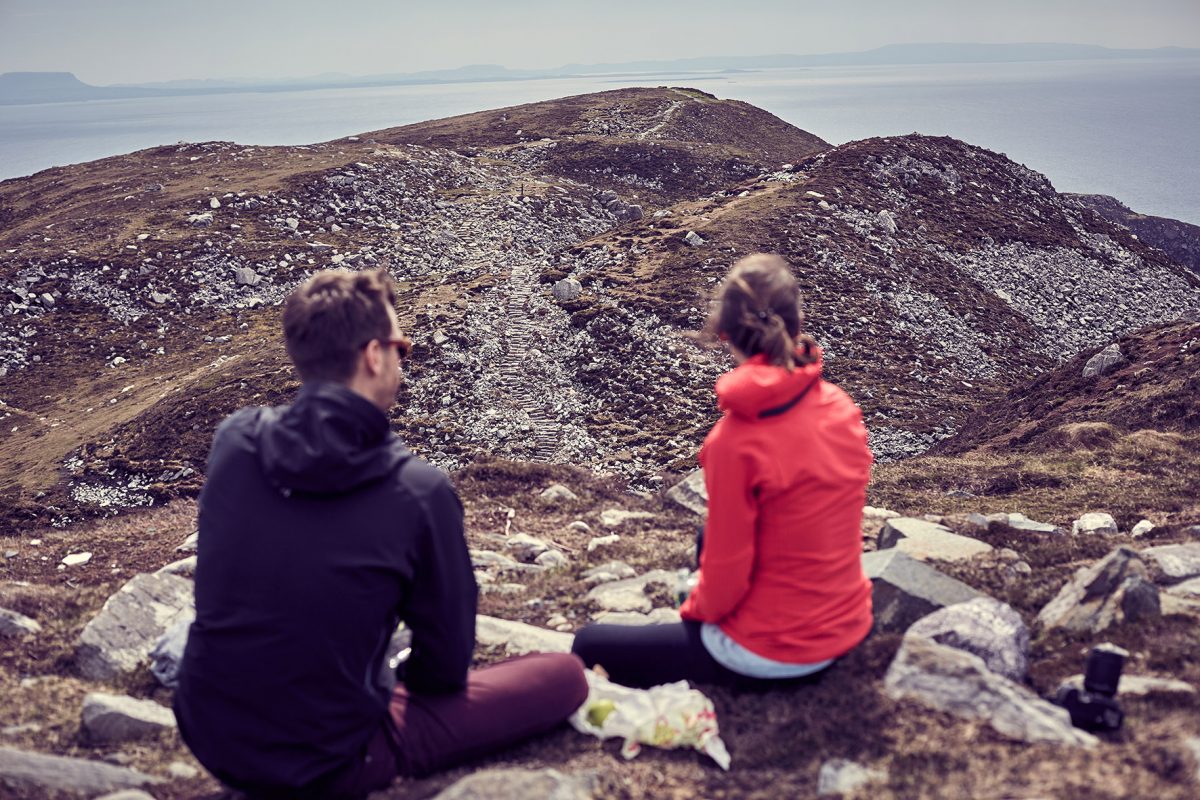 A mountain of experience behind new path at Sliabh Liag

A monumental project has been completed to offer a new experience to visitors at Sliabh Liag. Here, we find out about the extensive engineering behind the new path:

When visitors walk the new upland path to Sliabh Liag, the towering sea cliffs in south Donegal, they walk across stones that came from another part of the hills, a few kilometres away.

But that natural look does not come easy – it took a lot of work in extreme weather to get the job done.

More than 160,000 people visit Sliabh Liag each year, and the new path is designed to ensure that they can enjoy the cliffs, while protecting the environment into the future.

The new path at Sliabh Liab which has been designed to ensure the protection of the unique landscape amid growing visitor numbers.

The council also hope the path can serve as an example for similar works across Ireland and further afield.

Drawing on expertise from McGowan Environmental Engineering Ltd, a firm based in Scotland with extensive upland experience, the council is the first local authority in the Republic of Ireland to undertake this type of mountain path works.

“The quality is of a very high standard and will set the benchmark for other works that may be happening in the country,” Shaun Paul Murphy, Executive Engineer with the council, said.

Ross McGowan, managing director of McGowan’s, was in Shanbally, outside Teelin, this week for the official opening. While the Donegal project offered challenges, McGowan’s experience meant they brought lessons learned in the Scottish hills to the work.

Ross McGowan from McGowan Environmental Engineering Ltd who worked with Donegal County Council and the local community on the new path at Sliabh Liag designed to ensure the protection of the unique landscape amid growing visitor numbers.

“We have three teams of five people in Scotland, so we have 15 people working all year-round doing mountain path work,” he said. “So it’s something that we do all the time.”

McGowan tries to use local stone for paths, for their natural look. Here, the council and McGowan’s, in consultation with National Parks and Wildlife, agreed to use to stone from the scree slopes on the hillside at Sliabh Liag.

But that meant weeks of careful selection by hand of hundreds of tons of suitable stones from the scree slopes.

The new path at Sliabh Liab which has been designed to ensure the protection of the unique landscape amid growing visitor numbers.

“Every single stone we picked was hand selected,” Ross said. The methodology for the work is quite sensitive and skilled, “and you really have to cover your tracks, so basically no one would know we’ve been there,” he said. They replaced stones in the scree with bits of moss and other stone to ensure no gaps were left.

“Once we had that stone, and the right kind of stone, the job was made much more easy,” Ross said.

Still, they had to contend with the weather. The lifting of stones to the path site was done by helicopter, and severe winds led to five airlifts being cancelled. There was hail and wind chill factors that brought temperatures well below zero. Still, McGowan crews lost just one day on site due to weather, working from October of 2017 to May of 2018.

Ross credited the training and equipment they provide their crews. “It’s all about mindset and mentality, because you’re in an extreme environment,” he said.

In a way, generations of Donegal people helped to determine the path route. James Kelly, Senior Executive Engineer with Donegal County Council, said the council provided McGowan with a corridor that followed the most heavily travelled path to the cliffs, one carved step by step over the years. That coincided with the area where the most erosion was taking place, and McGowan determined the final route within that corridor.

The path creates a single, defined route through some difficult and steep sections. Ross explained that choosing a path line requires looking at ascent and descent. On the way down, people often have their heads down as well; most erosion takes place on the descent. Blocking stones have also been placed at strategic sites.

“Paths are built to keep people on them,” Ross said. The work also includes stone drainage works to protect the path and reflect natural drainage.

James said the council wanted to acknowledge the support of Fáilte Ireland, and particularly the contributions of Derek Walshe and Joan Crawford.

He also wanted to thank local landowners for their cooperation, saying the project would not have been possible without them.

“We’re grateful for the ongoing cooperation from those landowners during the whole construction process,” James said, noting in particular landowners in the townlands of Cappagh, Croaghlin, Shanbally, Ballymore, and Lergadaghtan.

McGowan brought in the local community, council staff, and others, holding two days of training in the hills to demonstrate stone pitching for steeper stretches, aggregate path work on the flatter sections, and drainage and landscaping.

“We’re always keen on community engagement,” Ross said. “We can use our expertise to build this, but we’re quite keen to pass that on to locals so that they can maintain it.” It’s a way of giving back to the community, he said.

Acknowledging that there were lessons learned over the entire project, James said that the council has delivered a fine project to be enjoyed for generations to come.

A mountain of experience behind new path at Sliabh Liag was last modified: May 15th, 2019 by Rachel McLaughlin