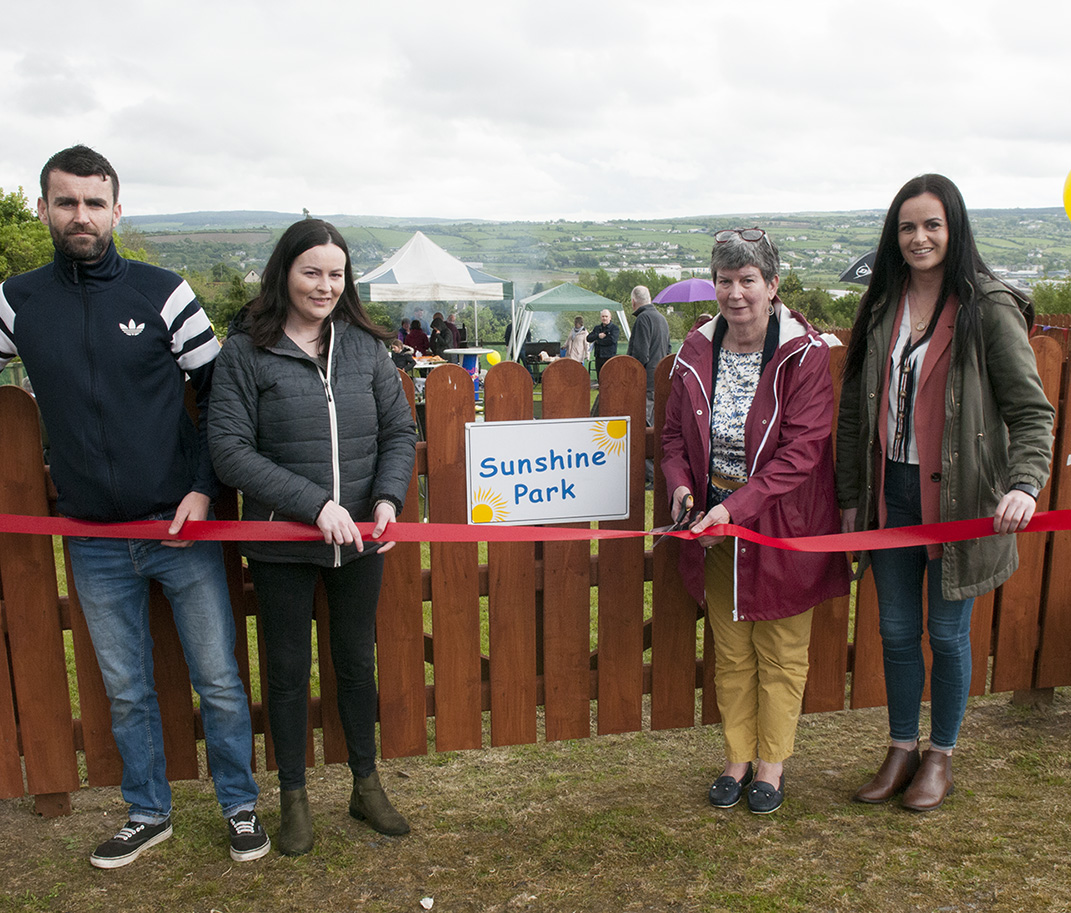 The skies above were greying, but ‘Sunshine’ will now be a permanent fixture in one Letterkenny estate.

A new park – ‘Sunshine Park’, as it has been named – was officially opened at Tara Court this evening.

The park is named in memory of the late Patrick ‘Sunshine’ McFadden, who died four years ago this week.

A native of Milford who settled in Letterkenny in the early 1980s, he was one of the Cathedral Town’s best known characters.

Possessing a wit and a humour that were equally matched, he was a fond political analyst and a keen sports fan, who was a former captain at Portsalon Golf Club.

A large crowd of family and friends gathered for the official opening today.

The ribbon was cut by Patrick’s wife Anne, daughters Natalie and Stephanie and son Patrick, who spoke on behalf of the family.

Another daughter, Danielle, couldn’t be present as she now lives in Toronto.

A wooden bench, with a commemorative plaque (including the inscription ‘Sometimes I sit and think. Sometimes I just sit. Come and sit a while with me’) was unveiled by his grandchildren Emma and Patrick.

An avid follower of the Blaney family, his political passion remained sharp and he was a firm backer of Ciaran Brogan’s election to Donegal County Council in 1999.

From then right up to his death in 2015, he was a loyal follower of the Letterkenny-based Fianna Fáil councillor, for whom he regularly canvassed.

“He’s gone now four years this week and he was one of the greatest characters that we all knew,” Cllr Brogan said at today’s ceremony.

“He was someone who was very loyal to me from the day and hour that I entered political life.

“There was no doubt that his heart was here in Tara Court.

Cllr. Ciaran Brogan with James Russell on the bench unveiled in memory of the late Patrick ‘Sunshine’ McFadden at Tara Court

“Some of the older residents will remember issues about taking over Tara Court, tarring Tara Court, getting the roads done and the footpaths done.

“He was never found wanting when it came to the residents of Tara Court.

“He was well known right across the county and further afield, as a plasterer, a great golfer, a powerful dart thrower, but politics was definitely where he came into his own.

“It was all about people: putting people first and meeting people.”
Former Minister for Sport James McDaid was among the large crowd who attended the opening.

The new park was blessed by Fr Brendan Ward, CC Aughaninshin and a minute’s silence was held in memory of all deceased Tara Court residents.

Speaking on behalf of the Tara Court residents, Gabriel Flood remembered one of the estates ‘much missed residents’.

“Paddy was already a well known character in the Letterkenny area through his work, his love of golf and huge involvement as a political activist for the late Neil T Blaney,” he said.

“Indeed, there are many stories told of canvassing on doorsteps and tae being drunk in the search of securing votes.

“One thing that sticks in my head is the huge respect Paddy had for people in public office – regardless of what party, if any, they belonged to and he would often state ‘ABC is a good hard working councillor.

“It is a great testimony to the man that he be remembered by members in attendance here of the local Municipal Council.”

The idea of a park in Tara Court was first mooted in 1991, but has finally come to fruition.
Gabriel added: “Projects like this demand a lot of thought work, sponsorship and planning and a committed driving force from people like James and Ann Russell, Eamon and Annmarie Rusell and the rest of the Russell family along with Billy Gibbons, who kept a keen eye on the procedures as work was being done.

“There are so many who played a part in this project.”

Patrick McFadden speaking at the opening of the “Sunshine Park” at Tara Court, Letterkenny on Saturday evening.

Thanks were extended to the sponsors who made it possible.

Now, Tara Court has a permanent memorial to one of the area’s most staunch activists.

And now there’ll always be Sunshine on a rainy day in Tara Court.

Sunshine on a rainy day – ‘Sunshine Park’ opened at Tara Court was last modified: May 18th, 2019 by Chris McNulty

Woman ‘could hardly breathe’ when choked by...