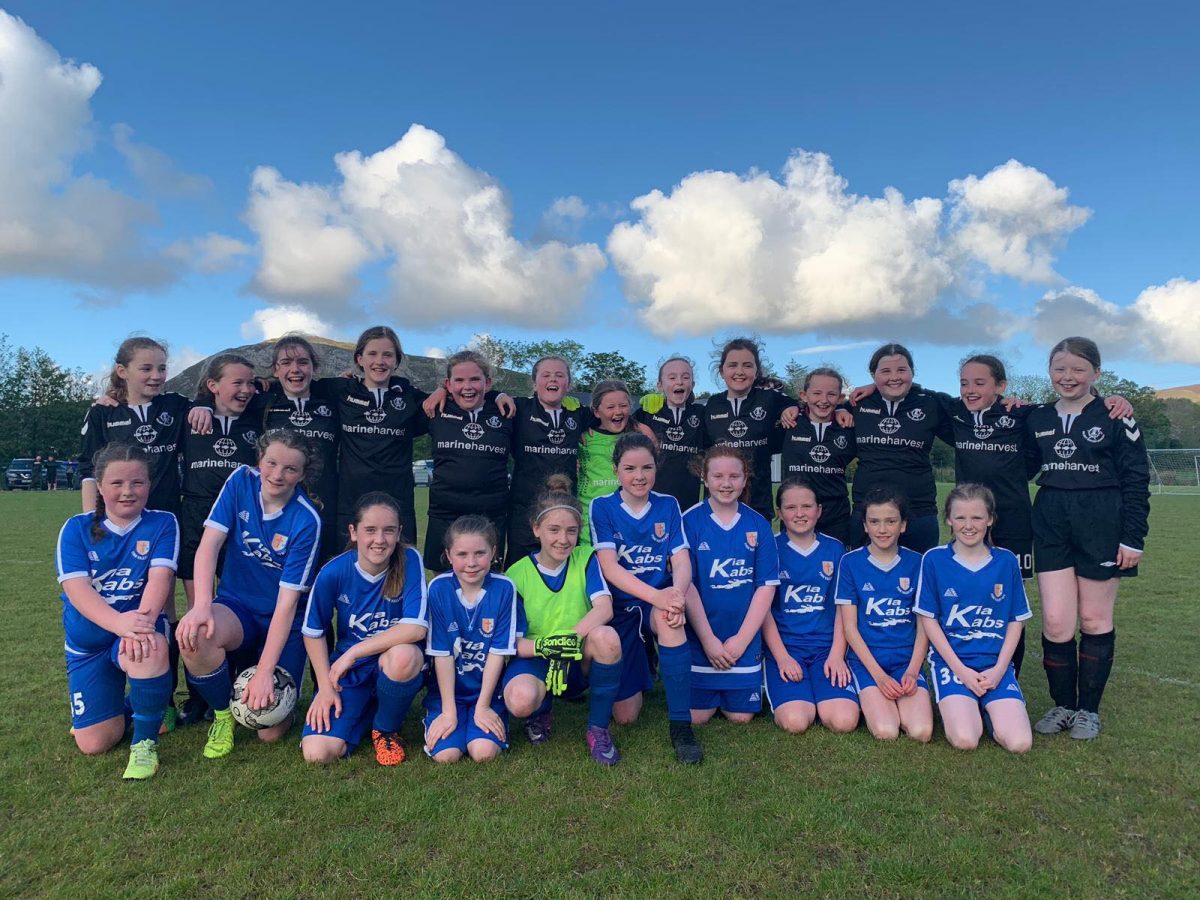 The goals are flying in across the Donegal Women’s League and the battles for honours in the different grades are keenly contested.

A young and depleted Ballyraine side came up against a Bonagee side in fine form last Friday night at Dry Arch Park.

Bonagee started on the front foot from the word go and took an early lead through Chloe Creevy.

Ballyraine then came into the game with Clodagh Patton proving to be a thorn in the Bonagee defence, however three quick fire goals before half time from Laura Callaghan (2) and another from Chloe Creevy put the contest to bed.

Ballyraine to their credit continued to battle to the end and missed a second half penalty whilst further goals from Caitlin Fletcher, Ava Kelly and a solo effort from Ginny Diver rounded off a convincing victory for the Bonagee girls.

Canning was first to score after a great individual run and excellent shot from a tight angle.

Shortly after Scarlet Keys received a blow to the head and was removed from pitch which left gap for Milford’s Amy Patton to score.

Ellie McNeill was causing problems in the left for Milford making good runs with ball but Ava Molloy defended well. Tammy Gallagher and Rosie O’Donnell linked up well in right setting up Canning for her second goal.

Ruth Cassidy and Amy Moore came close only for excellent blocks and saved by the young Milford keeper.

Abbie Harkin linked up with Erin Nellis just before half time but Scarlet Keys made a good block.

Chloe McConigley Blaney was quickest to react at start of second half but Amy Doherty pulled off a great save.

Jessica McGinley sent Ryan through to extend the lead.

Shortly after Ryan added a further two to her tally.

On a beautiful sunny evening on Monday, Mulroy Academy played host to Finn Valley in Rabs Park (teams pictured above).

Just five minutes into the game, Maeve Sweeney put the ball into the net for the hosts after a lovely through ball from Laragh Blaney.

The Mulroy defence of Leah Roche, Clodagh Gibbons and Gemma Mc Gonigle stood strong throughout and plenty of attacking play from the midfield line of Katie Shovelin, Kaylagh Sweeney, Caoimhe McLaughlin and Laragh Blaney helped Maeve Sweeney to score again in the 17th minute, followed soon after by another goal from the foot of Caoimhe Mc Laughlin.

Blathnaid Mc Ateer proved a great asset for Mulroy when she came into the defence line in this first half along with Ava McElwaine who put in a huge effort up front.

The second half proved much quieter and although the hosts had the majority of possession and many goal opportunities, they found it difficult to add to the scoreline.

Caoimhe Coyle and Katie Gallagher came on for Mulroy in this half and both managed to prove their worth on a number of occasions.

Goalkeeper Mary Bridget McGeever was tested a couple of times in this half but she was well up to the challenge and managed to keep a clean sheet.

In a hard-fought derby, Illistrin left with the bragging rights.

An own goal and a strike by Orla Malseed gave Illistrin a narrow win over their near rivals.

Lucy McGarvey struck for Kilmac, but Illistrin held on to claim a slender victory.

Goals in the first and last minute of the second half from Mary Ann Ward were enough for Gweedore United to see of a hard-working Raphoe Town team who might have nicked at least a share of the spoils on another night.

The visitors had plenty of possession in the first half, but Raphoe had the best chances, Alicia McCullagh’s shot forcing the Gweedore keeper into a good save and Jessica Patton then coming close only to see her shot sail inches over the crossbar.

Kelsey Parke, Niamh Toye and Maria McGlynn were superb in defence for Raphoe and Gweedore found it difficult to break through, Tianna Hannigan forced into action just once in the first half.

However a minute after the restart, Ward danced down the right wing and squeezed the ball into the bottom corner to give the visitors a slender lead.

They might have added to that, had Tianna Hannigan not made a couple of fine saves, but with Cliodhna Kelly in fine form and Kasey Kee and Sienna Slevin working hard on the wings having replaced Daisy Leeper and Laoise Boyce who both turned in fine displays, Raphoe were always dangerous on the break.

A driving run from Kelsey Parke from defence almost carved out an opening, but with the seconds ticking away, Mary Ann Ward put the game beyond doubt with another fine goal.

All in all a hard fought game with some super football played by both teams.

Rabs park was the venue for the game this evening. Both teams hit the ground running.

Mulroy came away with the points but a tight game could have saw the rewards going either way.

Both teams fought hard in the first half with Mulroy holding possession slightly.

Raphoe battled well with some good chances and shots from Abigail Temple Asokuh and Marie Sweeney for Raphoe.

Mulroy kept the pressure on with the Raphoe netkeeper being tested well during the game.

Ten minutes into second half saw the Mulroy girls break the deadlock with a lovely finish by Clodagh Heron.

Ciara Molloy was on fire on Friday night as Illistrin scored a big win over Swilly Rovers.

Molloy’s four laid the foundations with Leanne McGettigan also on target while Swilly also scored an unfortunate own goal.

In what was a tightly fought game of end of end football it was the Bonagee side who came away with the three points against a physical Gweedore team.

Bonagee started the brighter with a chance inside the first few minutes, a lovely ball played into the box by Hannah Hopkins with Grace Murphy’s connecting shot going wide of the post.

There were chances at either end of the field and it was Ella McGeever who got Gweedore’s first of the night.

Soon after, Bonagee levelled the game when Grace Murphy was taken down inside the box and she made no mistake with her penalty kick.
With half time looming Meabh Boyle got hold of a loose ball in midfield and riffled the ball into the corner of the net.

The second half seen a much hungrier and determined Bonagee team and it wasn’t long before Bonagee got their secnd of the night with Grace Murphy finishing a through ball from Hopkins.

Gweedore were pushing more up and putting the Bonagee defence under pressure but with Cliodhna Patton and CodieFfriel on top form they weren’t taking any chances.

Gweedore had a great chance to get their third with a fierce shot from Shiela Ferry but Aleysia Alcorn made a fine save.

With minutes left Bonagee won the game with Hopkins once again the provider for Murphy to control it on her chest and place it in the corner of the net to get her hattrick.

A great display of fight from the Bonagee team in the second half coming from behind on two occasions.

Kilmacrennan got their first victory of the season.

Three goals from Emma Price and two from Natasha McGettigan sealed the deal for them.

The first goal came on 10 minutes from Natasha Gettigan who netted neatly in the back of the net.

Emma Price put two in the back of the net before half time.

Finn Valley were dangerous on the break and hit the post and were unlucky not to get on the score sheet.

Both teams teams reduced to ten after the break and two more goals from Emma and Natasha sealed the victory.

Here’s all the latest action from the Donegal Women’s League was last modified: May 22nd, 2019 by Chris McNulty