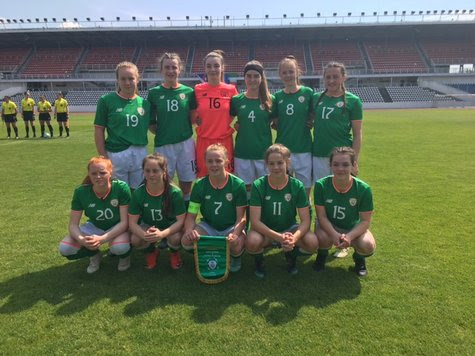 Donegal girls on target in Prague for Republic of Ireland U16

The Republic of Ireland Women’s Under-16 squad rounded off a very successful UEFA Development Tournament with the help of two Donegal girls, Erin McLaughlin and Kerryann Brown.

Sue Ronan’s side played their third game in the tournament against the Czech Republic in the Rošického Stadium in Prague – where they came away 4-1 winners.

Limerick’s Aoife Horgan put Ireland in front in the 20th minute, while just four minutes later Teegan Lynch doubled their lead to make it 2-0 at half-time.

And while the Czech Republic managed to pull one back through an Irish error in the second half, Kerryanne Brown’s and Erin McLaughlin’s goals on the 47th and 71st minutes respectively saw Ireland secure a deserved victory.

Speaking after the game, Head Coach Sue Ronan outlined that the game was a real example of what the Development Tournaments are all about.

Ronan said: “We’re very pleased with the game today, both the result and the performance. It was probably the best football that we played in the tournament. The girls obviously had a disappointment in the game against the USA on Thursday, so they did really well to put that behind them and do so well today.”

And Ronan was keen to express that the 20-player squad – all of whom took part in every game – will have learned a lot from the week and that it will play a key role in their development.

She said: “The girls are just fantastic. They have done us proud all week and they very much deserved the win today. Again, we made a number of changes to the team and everyone was able to adapt and go on and play very well.

“The goals were top-drawer too. The one goal we conceded was due to a mistake by us, but they will learn from that. The whole week has been a learning opportunity for them and they will definitely develop from here. I can see quite a few of them taking a step up to the next level very soon.”

This game followed a 4-0 win against Belgium on Tuesday afternoon and a 4-0 defeat to the USA on Thursday.

Donegal girls on target in Prague for Republic of Ireland U16 was last modified: May 25th, 2019 by Shaun Keenan