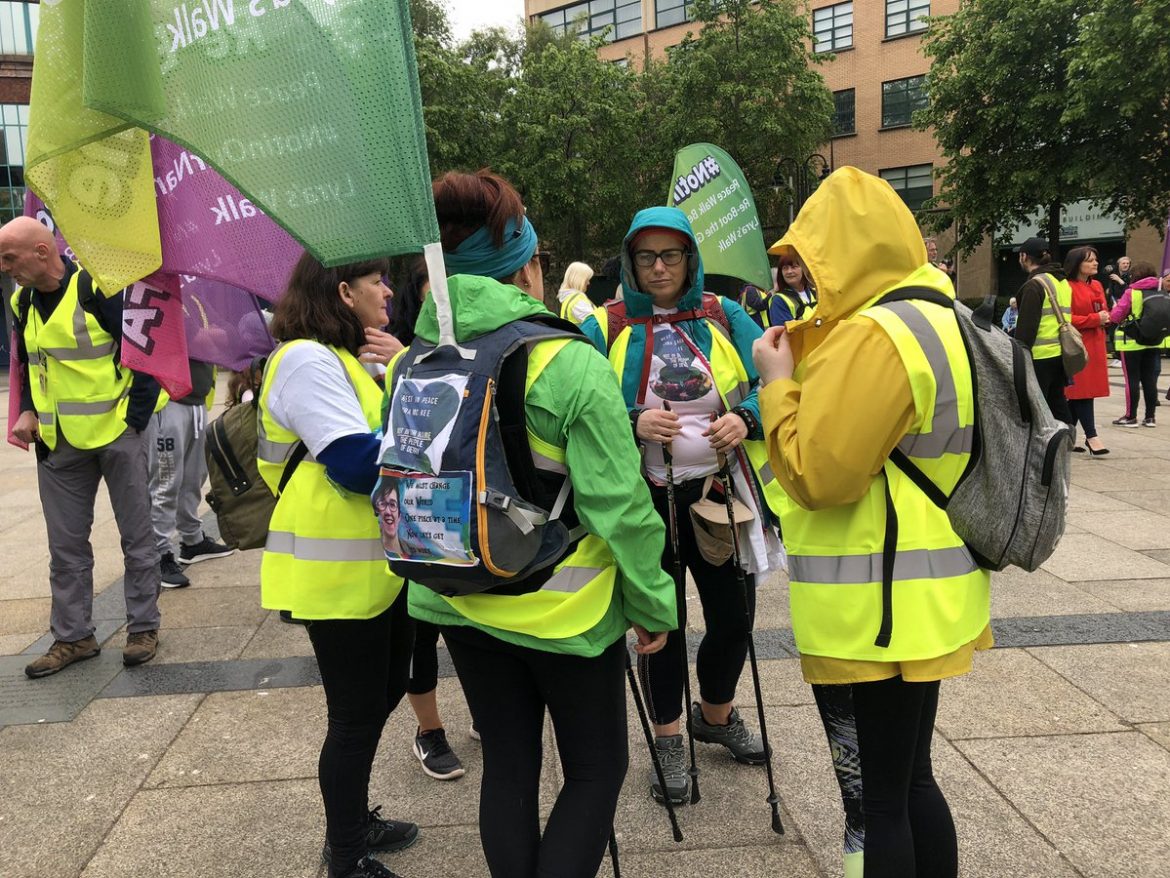 written by John2 May 25, 2019
FacebookTweetLinkedInPrint

Friends of murdered journalist Lyra McKee have started a three-day peace walk from Belfast to Derry.

Hundreds turned out at Writer’s Square in Belfast on Saturday morning, many wearing T-shirts in her memory and carrying flags with messages of peace.

The 29-year-old was shot in the head by the dissident republican group the New IRA while observing clashes with police in Creggan on Thursday, April 18.

She was struck once to the head with a bullet fired by a ‘New IRA’ killer.

Snow Patrol frontman Gary Lightbody is due to join them on the last leg on Monday ahead of a rally at Derry’s Guildhall.

Lyra’s Walk logistics and location manager Brenda Gough urged anyone who sees the walkers to show their support.

She thanked all the community groups which have offered support with water and snacks for the walkers en route, and the Samaritans who will send counsellors into the campsites each night.

“We had over 300 walkers registered, obviously life happens, but the main body of walkers have turned up,” she told the Press Association.

“The aim was to have a very mixed representation of the whole community of Northern Ireland and everyone has stepped up.

“This type of movement attracts people who have a lot of empathy and compassion, and don’t hold prejudice.

“We do have some walkers who have played their part in the Troubles, they are here to support us and show that change can happen.

“That is the ethos of this, we want people to address themselves and not the politicians because we have the politicians that we vote for, we are responsible for our government. We can’t just blame them.”

“Starting at Writer’s Square was Sara Canning’s (Ms McKee’s partner) idea, she said Lyra was a writer and so the start point should be Writer’s Square,” she said.

“It’s beside St Anne’s Cathedral where the funeral was, so yeah, we are starting off where we last saw Lyra.”

During the funeral, a priest asked local politicians why it took the death of a 29-year-old woman to unite their parties.