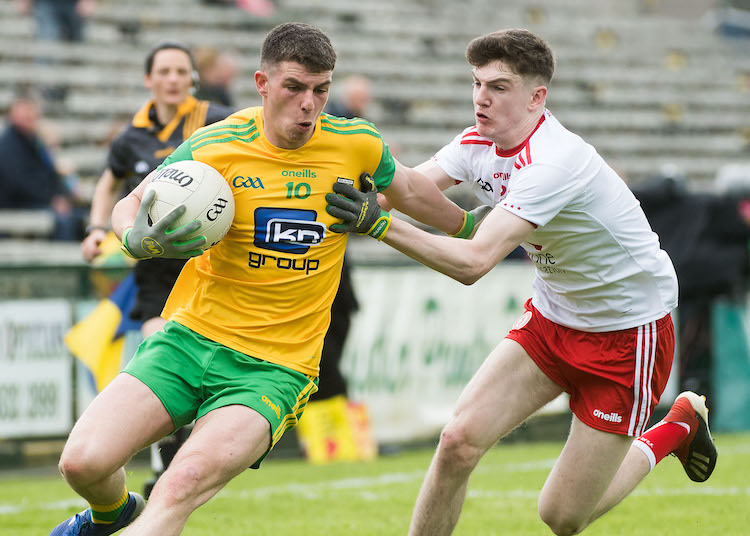 Tyrone, powered by 1-7 from Seán Óg McAleer, proved too hot for Donegal’s U20s to handle in the Philly McGuinness Cup at Brewster Park.

McAleer was the undoing of Donegal with 1-2 by the Gortin man in the opening moments of the second half killing Donegal’s challenge.

A Colin McFadden goal late in the first half had brought Donegal back from the edge, but they were beaten by McAleer in a blitz just after the restart.

Picture: Donegal’s Paddy Dolan looks for a way past Fermanagh’s Aidan Clark during the game. Picture by Evan Logan

McAleer was picked out by Joe Oguz’s deft pass across the edge of the square and Tir Chonaill goalkeeper Eoin O’Boyle magnificently turned over the top, preventing a certain goal.

Yet, 90 seconds into the new half, McAleer had the ball in the net, giving O’Boyle no chance after coming in from the right-hand side.

Disaster struck again for Donegal as Antoin Fox, in spite of being off-balance, netted from a James Garrity pass in the 41st minute.

Ten minutes from time, Conor O’Donnell fired against the inside of the post as Donegal sought to stage a late comeback, but Tyrone had too much in the tank and had eight points to spare by the end.

After Conall Grimes opened the scoring for Tyrone, Donegal hit back in style as Paddy Dolan – fresh from a hat-trick in Donegal’s recent win over Roscommon – superbly riffled to the back of Lorcan Quinn’s net.

Tyrone shook their heads clear with Tiarnán Quinn, James Garrity, Canavan and McAleer scoring four points in as many minutes.

Dolan, again after taking a pass from O’Donnell, cut the deficit and Conor ‘Duck’ O’Donnell converted a free to level the sums again.

Tyrone hit the game’s next six points, including a delightful 45-metre free by McAleer.

The Red Hands cut through for a neat point by Canavan following a strong surge through Donegal’s arteries by Antoin Fox and Mark McKearney.

McAleer dispossessed Donegal defender Karl McGlynn to clip overt as Tyrone opened up a six-point lead.

Donegal scored eight goals in their last outing, a 8-9 to 2-9 win over Roscommon. Donegal made four changes from that win in Dr Hyde Park with McGlynn, O’Donnell, Ryan McMahon and Aaron Deeney all coming into the side.

They got a much-needed second here when McFadden batted in from close range after Conor ‘Duck’ O’Donnell did the spadework to make an incision. McFadden’s goal brought Donegal to within three points, 0-12 to 2-3, at half-time.

Just when Donegal thought they were in the game, McAleer quashed their notions.

Donegal are back at Brewster Park next month for an Ulster U20 Championship game game – with a showdown with Tyrone a distinct possibility again.