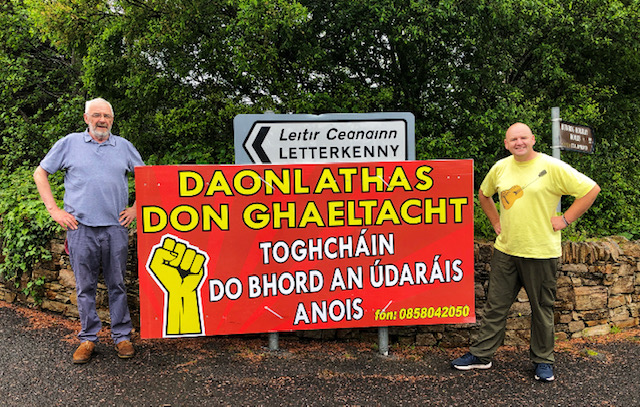 Campaign launched in West Donegal to reintroduce elections for Údarás board

written by Stephen Maguire May 31, 2019
FacebookTweetLinkedInPrint

A campaign has been launched in West Donegal calling for the reintroduction of elections for the board of Údarás na Gaeltachta.

Dinny McGinley announced the ending of elections to the board back in 2011 when he was Minister for the Gaeltacht, claiming that elections cost too much.

Now billboards have been erected in Crolly and Gaoth Dobhair in a bid to raise the issue.

Poll topper in the Glenties Electoral area, Cllr Micheal Mac Giolla Easbuig is one of the people behind the campaign.

He said “At the time, the Gaeltacht had already suffered from serious attacks from the Fianna Fáil / Green Party government and the new Fine Gael/Labour government.
The Údarás budget had been cut from €25 million in 2008 to €6 million in 2011.

“When a community organisation was formed to oppose these cuts, it was effectively gagged when the government threatened to sack the spokesperson from his job as a gardener.

“Since then, Údarás has initiated a new strategy, the Language Planning Committees.

“Although they said that the strategy came from the Comprehensive Linguistic Study Of The Use Of Irish In The Gaeltacht (2007), some parts of the strategy contradict the recommendations of the Study.

“For example, although the Study recommended that a Gaeltacht area should be treated as a linguistic unit, our Gaeltacht area has been split in two and even the islands have their own Language Planning Committees.

“All the experts have told us that this is our last chance to preserve the Gaeltacht and there is neither rhyme nor reason to the fact that there are no elected members of the board of Údarás na Gaeltachta to steer this important project.

“It’s high time the government re-introduced democracy to the Gaeltacht and announce elections to the board.

“If an elected board is chosen, we will be pressurising them to make sure that all board meetings are open to the community and that they would all be broadcast live on the internet so that people can see for themselves how the board makes decisions on the important challenges facing the Gaeltacht community.”