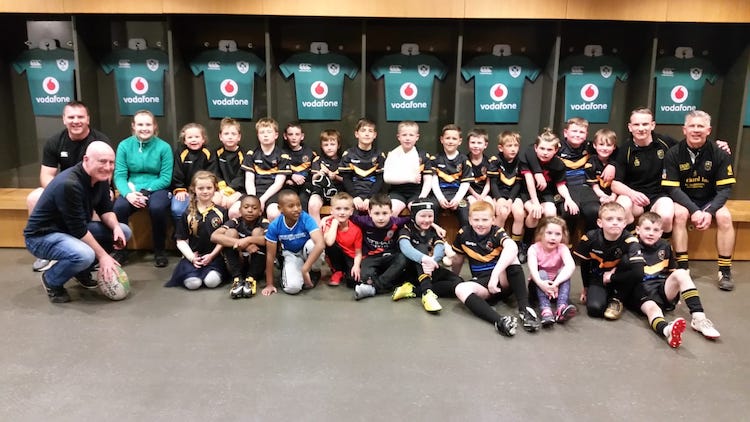 Earlier this month, Letterkenny Rugby Club’s u10s travelled to the Aviva stadium to take part in a national rugby festival for u10s organised by the IRFU.

Ulster’s John Cooney drew the Letterkenny team out of a hat to compete in the festival along with 19 other clubs from the length and breadth of the country.

The whole day was superbly organised by Irish Rugby and began with a run out through the tunnel by each team to an Aviva welcome from a big crowd which included a large Letterkenny contingent.

All seventeen players played a part in each of the four games. As expected the rugby was fiercely competitive and the Letterkenny lads showed no fear as they matched everything thrown at them.

The Aviva pitch was split into four mini pitches and Letterkenny were grouped with Corrib, Mullingar, Virginia and St Marys from Limerick. Mullingar and Virginia were the toughest opponents and there were a few walking wounded after these games but Letterkenny battled bravely.

The matches against Corrib and St Marys were very evenly contested and Letterkenny scored some lovely team tries by keeping the ball alive in contact as they have been doing all season. The tackling and commitment shown by all the players through the games was something that the coaches and travelling support were immensely proud of.

The squad were also taken on a  tour of the players tunnel, dressing room and warm up areas by the Aviva staff and given the opportunity to ask some interesting questions about what goes on prior to a match.

All the players had a long but wonderful day playing at the home of Irish rugby. Their conduct both on and off the pitch was a credit to the club, town and county.