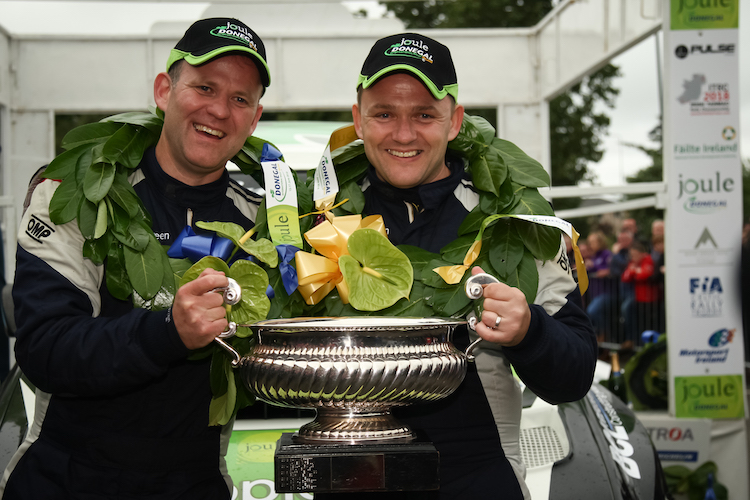 Listen: ‘Sting in the tail’ awaits with big changes for Donegal Rally

There are some significant changes to the 2019 Joule Donegal International Rally, with a capacity field of 161 crews set to tackle the Donegal tarmac.

World rally driver Craig Breen has been confirmed on a list headed by three-in-a-row champion Manus Kelly in a Hyundai i20 R5.

Donagh Kelly, Declan Boyle, Garry Jennings and Sam Moffett are among those who will be in world rally machinery for Donegal.

Once again, the Joule Donegal International Rally will be run over three days – with some stings in the tail this time.

Friday will see the crews leave the An Grianan Theatre as they set out to complete 6 stages in the Buncrana, Burt and Manorcunningham area, service will be based in Letterkenny.

“A lot of the newer drivers wouldn’t have done those stages,” Clerk of the Course Eamonn McGee told Donegal Daily/Donegal Sport Hub.

“We have run those stages before, in 2014 for the Harvest.

Saturday has eight classic stages on the menu, with names such as Gartan, High Glen, Knockalla and Carnhill to stir the emotions and whet the appetite of even the most seasoned of Donegal Rally competitors.

The traditional Sunday stages of Fanad and Atlantic Drive are joined by another classic from yesteryear Port Lake, these three stages run twice really encapsulate the true challenge of the Donegal stages.

Centralised service for all crews on Saturday and Sunday is in Milford.

McGee said: “We have jigged it about a wee bit. People would be used to going to Knockalla on the Saturday morning, a big stage. They set the pace on Knockalla. Now, they have some tricky stages before Knockalla.

“Sunday is a change, too. We’re finishing in Port Lake. It’s a tricky stage and we all know what Port Lake can throw up.

“The change makes them rewrite the notes and they have to start from scratch.”