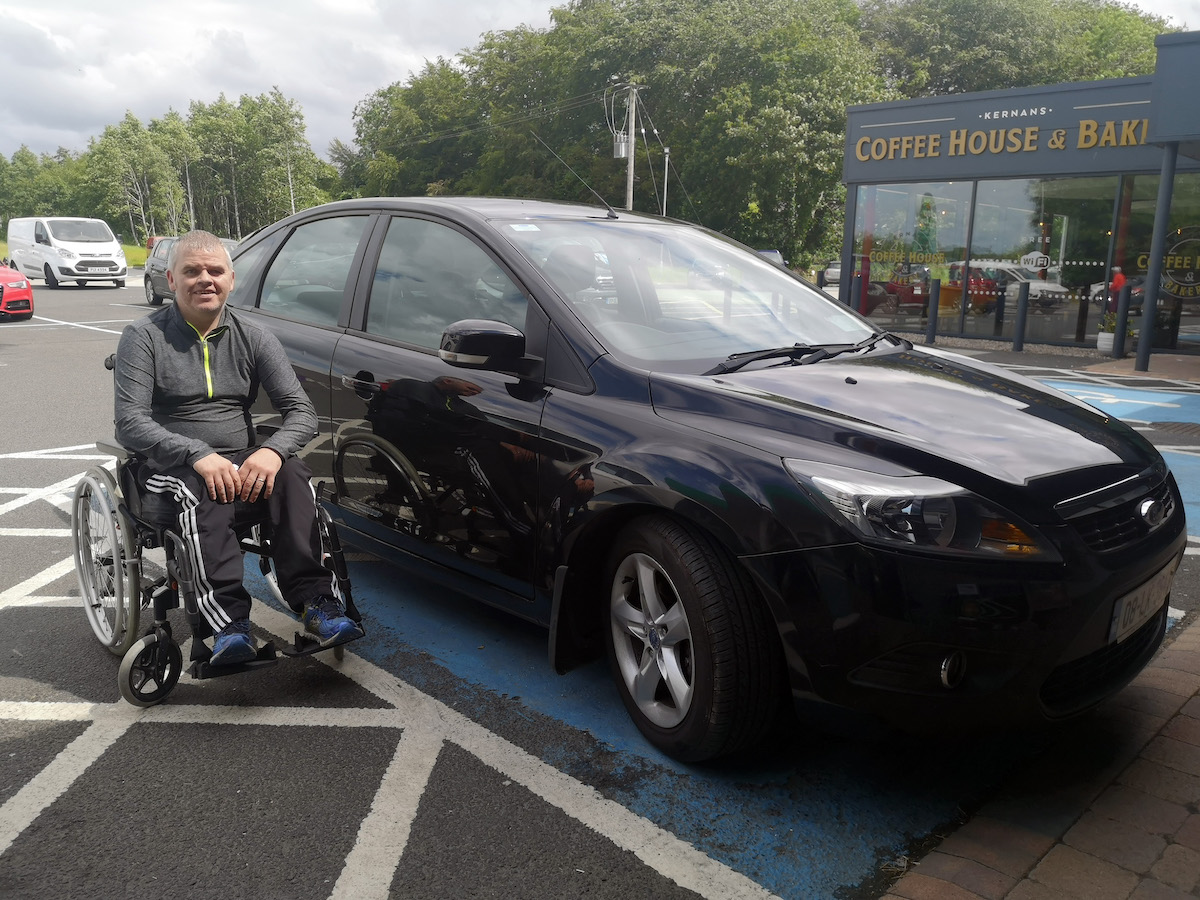 For most, it’s the dread of life where tempers are tested inside and outside the family car.

Where families try to beat the clock every school day in life as they take on the gauntlet that is the school run.

For one man, it has become a privilege thanks to the thought and anonymous generosity of the people around him.

It would do your heart good to watch Paul Dillon sitting with his elbow out the window of his 11-year-old Limerick registered Black Ford Focus waiting at the school gate for 3pm to arrive so he can collect his wanes from school.

An hour earlier, Paul pulled on to one of the two blue disabled parking bays at Kernan’s in Newtowncunnigham.

A couple of his workmates are on their lunch break and go out to meet Paul.

They give him a hand onto his wheelchair. His arrival into the shop is greeted with smiles from staff and regulars alike in doing a bit of shopping or even in for a bite to eat.

Paul makes his way into the diner and takes a wee tour around the restaurant having a yarn with this one and that before he gets his workmates to hold his wheelchair steady as he slides himself over on to the seat and into stall No 1, then the slagging and craic begins.

Liverpool will get a mention at least twice, and the big win this year, Paul is a massive reds fan and of course, everyone around him will rubbish them.

Paul’s presence in Kernan’s lifts the spirits of people.

Someone waves at him from one of the isles in the supermarket and Paul waves them over to hear their craic.

They stand yapping with a basket half full of messages in the diner as waiters get the all-day breakfast out past the crowd that has gathered around Paul.

Paul was diagnosed with motor neurone disease on the 2nd of January this year.

Since then the wider community around his home in Newtowncunningham have rallied to make his home more adaptable and accessible for his wheelchair.

Everyone is very focused on making Paul’s life and his families life as normal and as comfortable as it could possibly be.

A friend of Paul’s Dominic Robb who is a motor mechanic based in Newtowncunningham made the suggestion that he would go looking for a good run around car for Paul and get it fitted out to suit Paul’s needs to give him a bit of Independence so he could a take a spin up to Kernan’s for a yarn with friends and workmates and get him out of the house a bit more.

Paul Dillion proudly showing off his Ford Focus which has been adapted to suit Paul driving needs. Photo Brian McDaid.

In the last few weeks, Dominic got a car sorted and landed out to Paul one evening and they both headed off up to Letterkenny with Dominic driving as Paul watched on.

On the way back Dominic got Paul into the driver’s seat and they set off cautiously back to Newtowncunnigham.

By the time Paul got to Newtown, Dominic was well impressed with Paul’s progress behind the wheel of his automatic Ford Focus so the two boys headed on down the road as far as Bridgend a spin before returning back to Newtown.

Paul Dillion pictured in his Ford Focus as he heads to collect his children from school in Newtowncunningham. Photo Brian McDaid.

Cinema trips, taking the girls to dancing lessons, even taking the missus to the hairdresser, and even going for a litre of milk are all on Paul list.

But most of all, up to Kernan’s to meet people is something that Paul has always done and enjoyed the banter from behind the butcher’s counter, be it in Kernan’s or in McGee’s butchers in Letterkenny before that.

This weekend Paul will be taking a wee break from behind the wheel and will be parking up his Focus today, Thursday, as Paul, Emma and the kids will be heading to Disneyland in Paris for a well-deserved family holiday.

NCT and other tests suspended during Covid-19