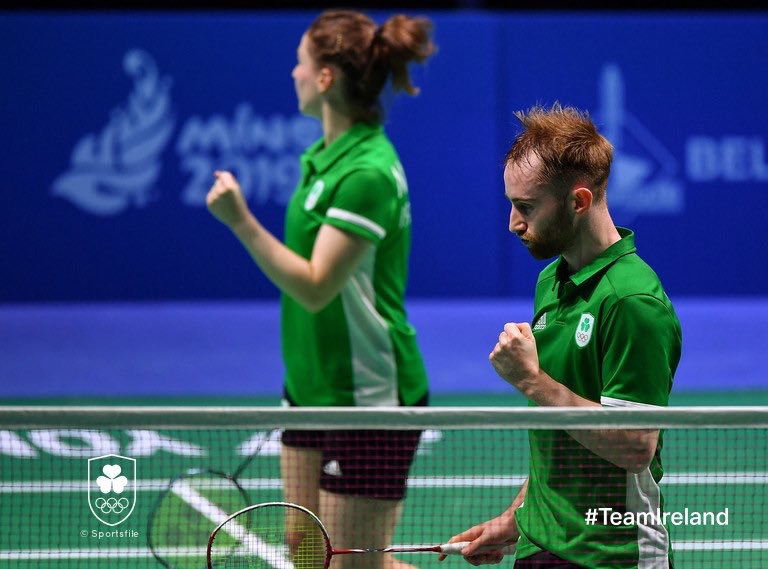 IT WAS nail-bitingly close, but Sam and Chloe Magee are through to the mixed doubles quarter-finals at the 2019 European Games.

A win over Belarus this morning, coupled with a gripping win by France against Russia means the Raphoe pair are into the knockout phase.

The Magees soared to a 21-9 21-11 win over Belarus duo Aleksei Konakh and Kristina Silich.

Konakh and Silich – backed, as with all the native competitors this week, by a big home crowd, went into an early 4-2 lead in the second game.

But once the Magees led again, they were never headed and a 21-11 win many they were comfortable winners

The 2017 European Championship bronze medalists needed to win in straight sets to boost their progression hopes.

The Belarus partnership had lost on each of their two visits to the court without winning a game in either match.

The Magee siblings were bronze medalists at the first edition of the European Games four years ago in Baku.

They needed to get the calculators out and wait for the result of the France-Russia match on court one for their fate to be determined.

But into the hat they go for the last eight.

A loss to French pair Thom Gicquel and Delphine Delrue on Tuesday morning would prove vital.

The previous evening, the Magees overcame Evgenij Dremin and Evgenia Dimova 16-21 21-19 21-15 to get off to a winning start.

The Magees are aiming for qualification points for the 2020 Olympic Games in Tokyo.

Their best ten tournaments from May 2019 until May 2020 will count towards their hopes of booking a spot in Tokyo.

Chloe Magee has already been to three Olympic Games having competed in the women’s singles in Beijing, London and Rio.