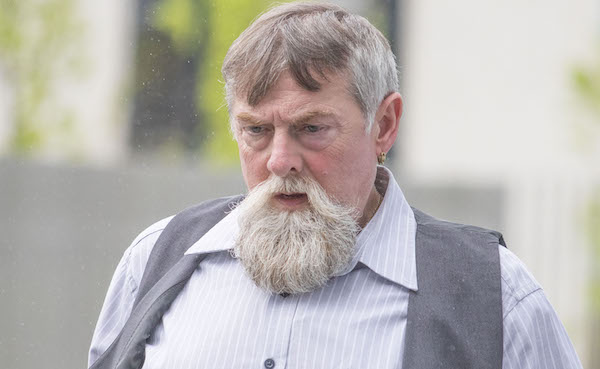 A computer expert who spied on children in public toilets using hidden cameras and placed secret cameras in his bathroom to spy on visitors has been jailed.

Kieran Griffin showed no emotion as he was sentenced to a total of three years in prison for a range of sexual offences by Judge John Aylmer at Letterkenny District Court in Co Donegal today.

Griffin, a distinctive man who often wore a kilt, had studied computers at Letterkenny Institute of Technology.

Gardai first became aware of him when he was spotted indulging in lewd behaviour in the toilets of Letterkenny Shopping Centre in Co Donegal on July 8th, 2016.

He was using a covert camera wrapped in a newspaper to spy on young boys in the toilets.

At the time, was found in possession of two phones, a memory card and a covert pen camera.

Gardai then obtained a search warrant was secured and officers raided his home at Cashel, Fanad as they continued their investigation.

They seized a number of items including a Sony laptop and other hard-drives as well as a five-page child pornographic story entitled ‘Swimland Beaver Patrol.’

All the items were sent for analysis to the Garda National Cyber Crime Bureau in Dublin.

Garda Detective Stephen McGonagle outlined to the court the contents of the material found on Griffin’s computer.

He revealed how the covert camera pen had been placed in Griffin’s bathroom at the home he shared with his elderly mother.

The video recordings showed Griffin setting up the camera and then it showed a young woman using the bathroom, including scenes of her naked while showering.

Other material found on hard-drives on the laptop seized showed Griffin engaging semi-naked chatting in a sexually explicit manner to boys as young as 14 years old.

Garda Detective McGonagle was asked by Judge John Aylmer if he knew where these victims lived or what country they were from.

Detective McGonagle said the young boys spoke broken English and he thought they were foreign nationals but that Interpol had not yet traced the victims.

He added that he had been told by fellow detectives who specialised in such investigations that it would be “next to impossible” to identify the boys involved.

Detectives interviewed Griffin on a number of occasions and he later pleaded guilty of a range of charges including possession of child pornography and engaging in threatening and abusive behaviour on dates between 2011 and 2017.

The accused man’s brother John took to the witness stand and said the investigation had ripped his family apart but that Griffin was still his brother.

“None of us would attempt to condone this in any way,” he said, adding that he had broken the family trust.

He added that if his brother went to prison his elderly mother, whom Griffin was now a carer for, would have to go into a care home.

“If she has to go into a home I don’t think she’ll survive very long,” he added.

The accused man was asked to take the stand and he apologised to his victims and to his family for all he had put them through.

He said he could have easily clicked past to the next screen when young boys appeared on the chat room but he chose not to.

The court was told that Griffin was a daily church-goer but that he had been fired from his previous job following publicity about his pending court case.

A number of reports were handed into court by Griffin’s legal team for Judge John Aylmer to consider before sentencing.

His barrister Ciaran O’Rourke said there was no question that the material seized was every distributed to other people or that Griffin had profited from the material.

Judge Aylmer released the accused on his own bail for sentence in March so he could consider today’s sentence.

Judge Aylmer went through each of a large number of offences committed by Griffin.

These included six charges of producing child pornography for which he said the term of imprisonment was six years on each charge.

However, he said he placed Griffin’s offences in the mid-range and said these charges merited a term of four years.

He further sentenced Griffin for charges of possession of child pornography for 18 months but was reduced to 12 months.

Judge Aylmer said there were a number of mitigating factors in Griffin’s favour and these included his early guilty plea and the fact that there was no evidence of profiteering or distribution form the videos he made.

He said it was also clear that Griffin had been a hard-working man who had an issue with alcohol and was in need of help with his mental health.

He also noted he had been a carer for his late father and was still a carer for his mother and that his time in custody would be another unfortunate consequence of his crimes.

He said he would also suspend the last 12 months of the four-year jail sentence on the agreement that Griffin agreed to comply with the probation services and other authorities for two years from when he was released from jail.

Griffin was hugged by his brother as he was led away in handcuffs by prison officers.