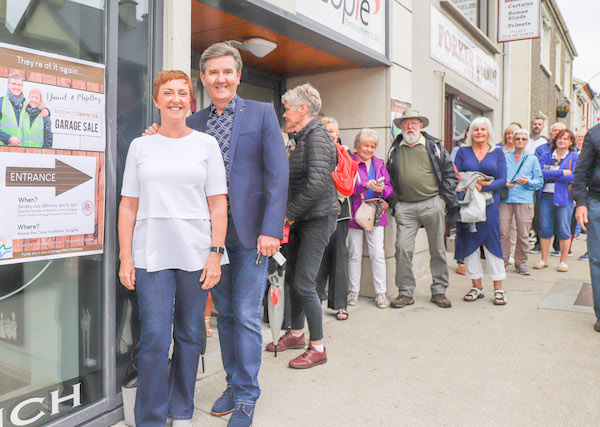 Hundreds of Daniel O’Donnell fans queued for hours today hoping to snap up a priceless personal memento of the star after he held a charity garage clearance sale.

The singing sensation along with wife Majella cleared out their home which underwent a makeover thanks to Room To Improve celebrity architect Dermot Bannon.

And dozens of items including lamps, mirrors, clocks, as well as rails of clothing belonging to the celebrity couple went up for sale.

Other items included Christmas decoration, pictures and even teapots.

Some of the many items which Daniel and Majella put up for sale. Pic by Northwest Newspix.

The money raised from the sale which was held at The Cope Foodstore in Dungloe went towards the very deserving Donegal Mind Wellness, a charity that is close to Majella’s heart.

Fans from as far away as the UK, as well as Mayo and Dublin travelled to the West Donegal town for the unique sale.

Daniel, in his own inimitable style, greeted fans before the doors of the garage sale swung open at 1pm.

Although the singer or wife Majella could not attend the sale, he encouraged fans to dig deep to support the charity.

“Everything is priced reasonably so dig deep. It’s for a very worthy cause and you are all very welcome,” Daniel laughed as he greeted fans personally.

Daniel had told fans that none of the items for sale were in a bad condition.

Daniel and Majella say goodbye to lots of personal items which they gathered over the years. Pics by Northwest Newspix.

“It’s just that we had too much stuff after Dermot did the makeover and we had it in the garage.

“I didn’t realise we had such a big garage and had so much stuff in it. It’s all in good condition but we just decided we didn’t need it and we put it to good use,” he said.

Fans were delighted for the chance to get their hands on a personal souvenir from the star.

Gloria Scott, from Omagh in Co Tyrone, told how she was a huge fan and how Daniel had travelled to attend her mother’s funeral back in 2,000.

“That’s just the kind of man Daniel is, so genuine. I’m here to support him and hopefully, to get something special in the sale,” she said.

Mary Hamilton, from Dublin, was holidaying in Sligo and made the two hours journey to Dungloe for Daniel’s garage sale.

The team from the Donegal Mind Wellness who will be busy at the garage sale. Pic by Northwest Newspix.

She said “I’ve been a Daniel fan for years. Only Daniel could do something like this and give all the money away to such a good cause. I hope himself and Majella make thousands from it for the charity.”

The sale will run for the rest of the week until all the items are sold.

And judging by the eagerness of Daniel’s fans to snap up a personal memento, that shouldn’t be too long!

Fans queue to get a rare personal memento as Daniel’s garage sale opens was last modified: August 1st, 2019 by Stephen