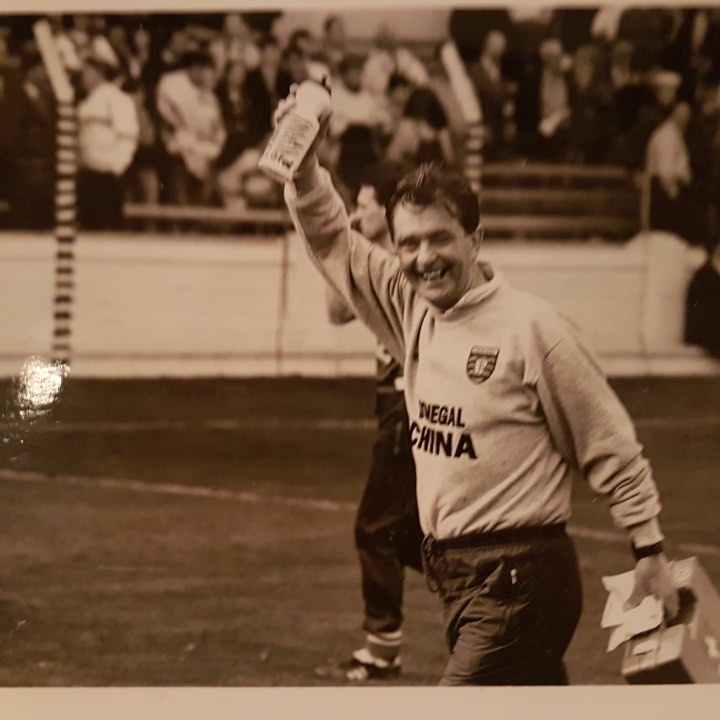 PATSY McGonagle was an Irish Athletics Team Manager for 25 years and managed Ireland 68 times as a manager, including at four Olympic Games, six World Championships and six European Championships.

Here, Patsy recalls some of his time as team trainer of the Donegal senior football team in the 1990s …

Picture: Patsy McGonagle during his time with the Donegal senior football team

DONEGAL FOOTBALL WAS a bit fractious at the time. PJ McGowan had taken over from Brian McEniff, who was manager in 1992 when Donegal won that first epic All-Ireland.

There had been a clamour for Martin McHugh, one of the ’92 stars, to take the job, but he ended up managing Cavan and, as luck would have it, we ended up playing Cavan in the Championship in 1997.

Martin was a brilliant figure within the game, but there was a feeling that he had done the wrong thing by going to Cavan.

They beat us fair and square in ’97 and, after the game I went to shake his hand, but the same rush wasn’t there from others.

There was a lot of resentment towards Martin from certain quarters, but I admired him. He put his head on the block and made what I’m sure was a difficult decision to go and manage Cavan.

Martin knows the game inside out and he was the best individual footballer I ever watched. He controlled and contributed all the time.

He was an absolute leader and was always planning the strategy for the team. I have no doubt he would have been such a driving force in the dressing room if he had taken over Donegal. He lived for Donegal and his heart would have beat a little quicker if he’d been the Donegal manager.

I had a good relationship with PJ and I got involved with a view to just helping him, but sure I was neck deep in it before I knew it. I couldn’t help it, and soon the training was ‘mine’. It was my call what happened on the training pitch and I got a great reaction from the players.

Tom Comack, later to become a journalist with the Donegal Democrat, Michael Lafferty, Sean Ferriter and Seamus Gallagher were all involved with us. But it was probably the worst time to get involved in the county team, simply because of ’92.

There was still a lot of back-slapping to be seen and heard. The men who lifted that first Sam Maguire Cup were a great bunch, no doubt about that. I understood and admired those fellas. They trained hard and never looked for short-cuts.

WE GOT TO two National League finals during my time with the county, in the spring of 1994 and again in ’95, but we lost them both.

I was disappointed the first year we lost to Derry, but I was devastated the second year, when once again Derry did the job on us even though it was a great Derry squad that included Anthony Tohill, Brian McGilligan, Tony Scullion and Joe Brolly.

The game was all over after about ten minutes. Tohill and McGilligan destroyed us at midfield.

But, apart from Derry, we had another big problem. Our own County Board. The Board had the players skimping and scraping for simple things like bits of gear. If I thought it was going to be such a problem, I’d have bought the gear myself. Honestly, it would have made life easier.

Manus Boyle was always pushing them on it. If the Board gave them a polo shirt, they thought they had given them the world. The Killybegs boys, of which Manus was one, were strong personalities on the Donegal squad of the 1990s and drove the thing. 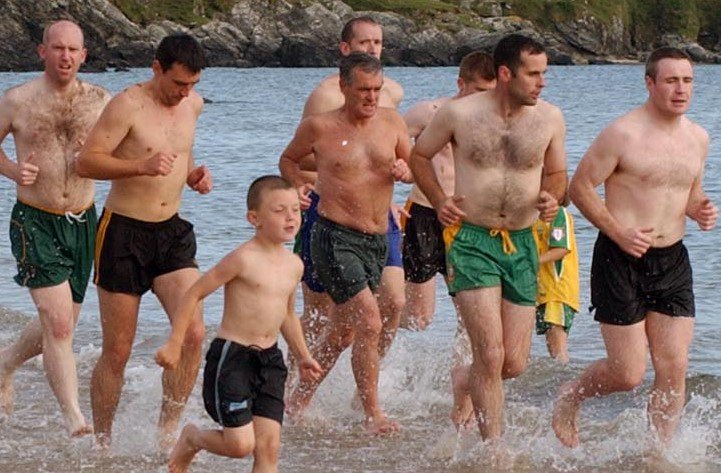 I returned as Donegal trainer in the early 2000s. Here, taking part in training at Fintra, Killybegs.

We were coming up to a game against Monaghan in Ballybofey, a game that was widely and foolishly considered a walk in the park. I could see what everyone was thinking.

Of course we will… no problem!

I couldn’t get them ready mentally and I was struggling. They were just there in body and they weren’t ‘into it’. I knew we were in bother. It was all about… ‘gear, gear… fucking gear’.

It would be wrong to say they wanted more gear. They simply wanted gear.

They had nothing at the time. At the last training session before the Monaghan game, a fight broke out. Manus and John Gildea got stuck into one another. I wasn’t unhappy looking at them.

Thank Christ for this… bit of aggression at last.

Manus was a contrary boy and pushed Gildea ’til he reacted. John wasn’t on the ’92 squad and was one of the new guys. But he had that bit between his teeth, too.

It was too late and the incident didn’t snap everyone to attention.

We lost to Monaghan. We were annihilated. 1-14 to 0-8. Hammered in our own back yard by nine points. Towards the end of the game, I went as far down towards the River End as I could go. I was just totally ashamed.

I MANAGED Sean MacCumhaills for a period.

We were playing Ardara in MacCumhaill Park and Martin Gavigan was sent off.

In those days, if you were sent off you weren’t eligible to win an All-Star.

Although he was playing against us, we tried to protect Martin. Myself and Charlie Faulkner, a MacCumhaills man who was the Donegal GAA chairman at the time, pleaded with the referee to let Martin stay on the field.

I knew it was going to be a big national story. Martin was one of the star men. Donegal were going well at the time and he was known all across the country. His nickname, ‘Rambo’ helped in that regard and, of course, his playing prowess made him a prominent National figure.

After the game, my message was very clear in our dressing-room.

‘There will be people looking for this story about Martin Gavigan,’ I warned. ‘But, as far as we’re all concerned he wasn’t sent off.’

All the national newspapers were ringing around the whole place, but they never got the story. We were so solid on that. If that was nowadays, the ball wouldn’t be at the lower goals when the news would be out… there’d be a #Rambo on Twitter.