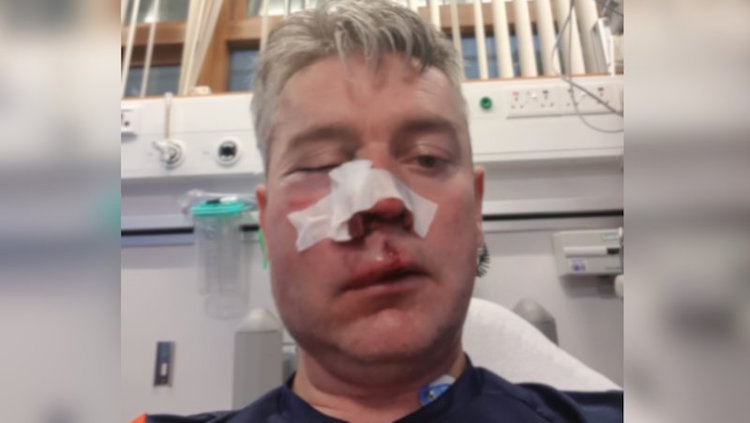 Four men are facing charges over an alleged assault on a football referee in Co Offaly last year.

Dungloe man Daniel Sweeney suffered a broken jaw and eye socket after the alleged attack which happened while he officiated a match between Horseleap and Mullingar Town on November 11 2018.

The 51-year-old was hospitalised as a result of his injuries and required five-hour surgery.

There was widespread condemnation across Irish football circles after shocking photos of Daniel’s wounds were shared on social media.

Speaking in the days after the alleged assault Paul Malone, secretary of the referees’ Midlands Branch, said: “The pictures don’t do justice to his face.

“He is not allowed to eat or talk. He can drink through a straw for the time being.”

Speaking from his hospital bed before his operation last year, the ref told us: “I’ve got a broken jaw, a broken eye bone, multiple fractures in the cheek, and then the nose had to be stitched.

“It is pretty serious. It is looking like an operation, possibly at the weekend.

“I think there is a bit of reconstructive surgery in the cheekbone. There’s things like the possibility, although small, to lose sight in an eye. It’s not good.

“With the surgery, there is a one in 2,000 chance of losing sight in an eye. And I may lose some teeth through the operation as well.”

Two men in their 20s, one teenager and a man in his 40s were arrested in the weeks following the alleged attack.

They were later released without charge and a file was prepared for the Director of Public Prosecutions.

Gardai this morning confirmed that criminal proceedings are underway and the men will receive a court date.

A spokesperson said “Criminal proceedings have commenced in respect to four males for the incident but have yet to appear before the courts.”