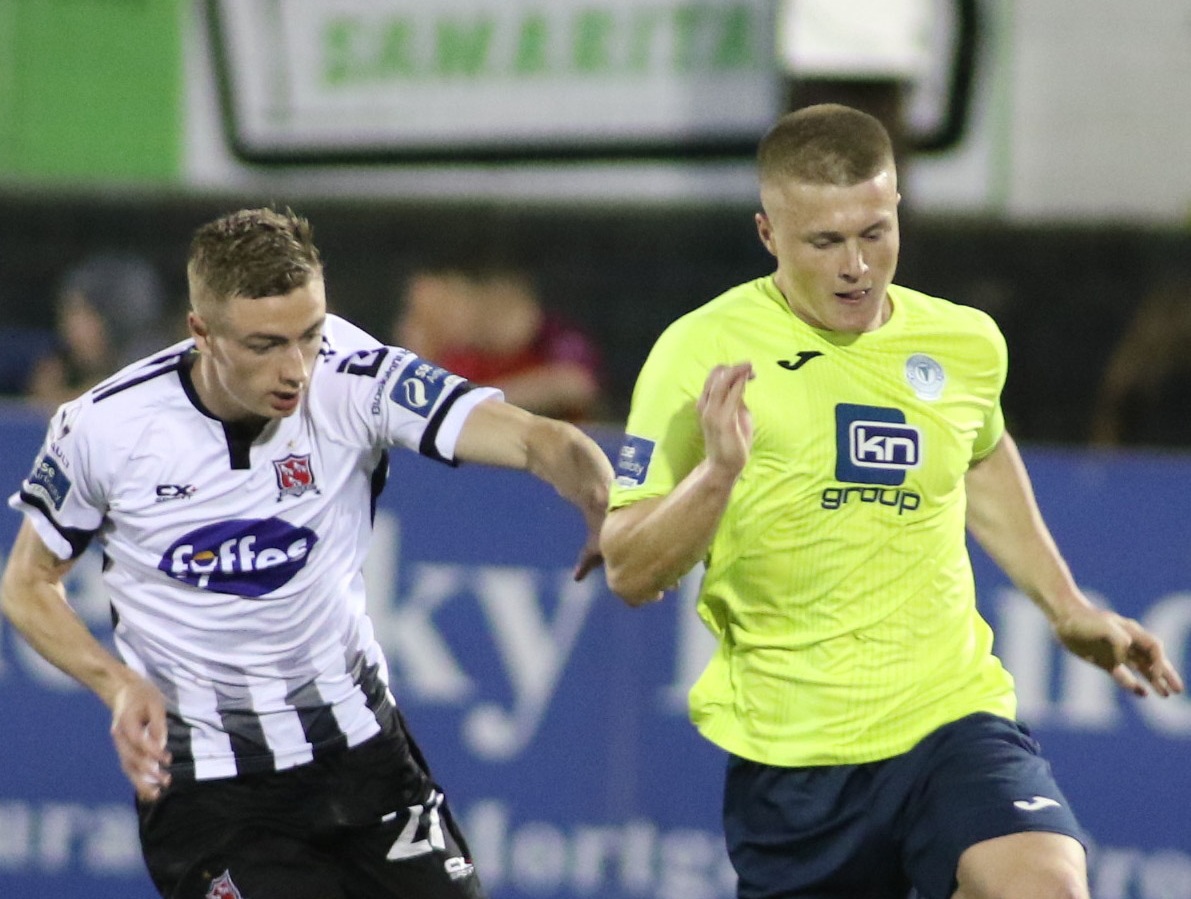 OLLIE HORGAN felt his Finn Harps side were undone by a ‘very soft sending off’ against champions Dundalk last night.

By Chris McNulty at Oriel Park

Harps conceded four second-half goals in a 5-0 defeat to the Lilywhites.

Harps were 1-0 in arrears when Mark Russell was sent off five minutes before half time. Russell was given a second yellow card for a late tackle on Daniel Kelly, having been booked for an earlier foul on the same player.

“It was a very soft sending off from our point of view,” said Horgan, who revealed that he spoke to referee Graham Kelly at the interval.

“I’ll give the referee huge credit. He invited me into his changing room at half time and he spoke to me. He was hugely respectful and he deserves huge credit for that.”

However, that didn’t change Horgan’s view on the decision.

The Harps boss said: “I feel that you either book the whole way through for tackles or you don’t book at all. It’s the inconsistency of the yellow cards that were either given or not given is really what I’m disappointed in.

“He felt the second tackle was a reckless tackle. I didn’t think it was any way reckless. You can argue if it was a yellow card or not. It was a hugely disappointing decision for us. I looked at the second one and I thought it was a very soft yellow card.

“We were very much in the game. Would we ever have got anything out of it before the sending off? I don’t know. They had a good few chances at the end of the first half. It was backs to the wall stuff. Would we have held out with eleven men? Possibly not, but we’ll never know.”

Horgan said: “I was very disappointed in the goals that we conceded. Dundalk could have scored another five that wouldn’t have been mistakes.

“Four of the five were mistakes and that’s most disappointing because we felt that we got over that.

“It could have been double figures there, let’s be honest about it.

“It was backs against forwards after the sending off. There is no point hiding that. For all of the play and the good chances that Dundalk had, I think four of the five goals were mistakes, which was probably the most disappointing part.

With UCD being hammered 10-1 by Bohemians at Dalymount Park, it means Harps are still six points better off than the Students. Harps are back in action at home to St Patrick’s Athletic in two weeks’ time.

Horgan said: “We have to lick our wounds and move on fairly quickly.”