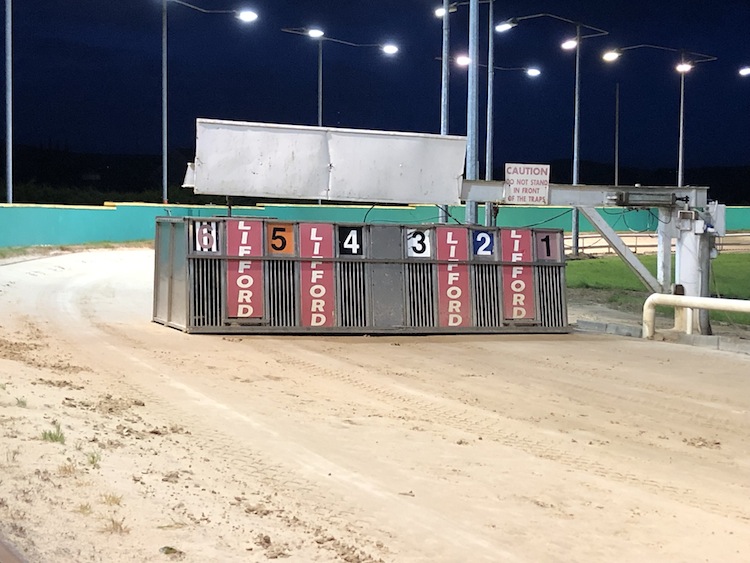 ‘Without Lifford, what are they going to do?’ Uncertainty abounds Lifford traps close for last time

AS THE lights flicked off at Lifford Greyhound Stadium last night, the few remaining in the venue took a longer look around than usual.

By Chris McNulty at Lifford Stadium

For as they trooped off into the night, they were unsure if they’d be back.

A week-and-a-half ago, the Duffy family confirmed that the venue was shutting down due to ‘an ongoing lack of support from the Irish Greyhound Board (IGB)’.

An emergency meeting this week in Strabane heard appeals for the stadium to be kept alive.

A statement from the IGB on Thursday suggested that a lifeline had perhaps been issued when they indicated to Lifford that race cards of a maximum of 12 races could be maintained until a strategic review was completed.

“This arrangement is offered to Lifford Greyhound Stadium on the basis of this report maintaining the operation of the track in the coming months,” the IGB said. “The IGB is also working to cater for greyhound owners and trainers, traditionally part of Lifford and/or Longford’s dog pools, by facilitating extra racing at Mullingar and Dundalk stadia in the near future.”

A larger-than-usual crowd trundled through the turnstiles last night.

Some arrived for a nostalgic night, others came curiously, but for the hardcore it was another night at work, but also a night shrouded in uncertainty and concern.

“A lot of the people I work with don’t know what to do,” said Matthew Duffy, the Racing Manager at Lifford Greyhound Stadium.

“They’re as uncertain as I am. It’s desperate, it’s heartbreaking. This has been my life. There are hundreds of people affected by this.”

The Derry native’s passion was clear as he mused that he was going ‘home for a good cry’.

Whispers that the stadium would be opened again next weekend circulated, but no entries were being accepted.

A meeting in mid-week may well give some light to the darkness, but the worry extends far beyond the loss of around 30 jobs. ‘I’ve been keeping dogs in the area for 30 years and I just don’t know what will happen now with this place closing,’ one long-time trainer said.

“It’s a big family here…It’s a club, really, but for all these people, this is a livelihood,” Duffy said.

“Without Lifford, what are they going to do? Where will the dogs go? This is going to be a massive change for everyone.

“The dogs have to come first. If the local track isn’t here, then what? People would be out extra fuel costs and then would be in competition to get on at other tracks. They won’t buy in two or three extra dogs, they won’t be keeping as many dogs.”

Since 2013, Lifford has only been operating a ten-race card one night a week.

Ten years previously, the 17.5-acre Ballyduff Road venue underwent a huge transformation and the 240-seater restaurant heaved to capacity as racing was held every Friday, Saturday and Sunday night.

Duffy wonders if ‘better advertisement and better promotion’ could have prevented the decision to close.

An exciting night of action on the track and the big crowds who fluttered through the impressive grandstand felt like a throwback to the good old days.

The last race, the HPW Getting Out For The Last Time 525 was won by Super Don, owned and trained by Derry’s Gregory Moore.

‘The dog’s just finding its form and now the place is closing,’ one of the dog’s connections sighed.

“My heart bleeds for these people,” Duffy said.

“The doggy people are my people and I came here from keeping dogs myself to being manager here.”

Super Don, out of trap 5, won by half-a-length from Ray White’s Do It Quick.

The Unraced 350 final was won by Colarhouse Candy, owned and trained by Patsy Whyte. Colarhouse Candy sped from trap 2 and finished in a blistering time of 18.88 seconds – one of the quickest times of the year – winning by four lengths from Whyte’s Colarhouse Misty.

Convoy’s Eunan McBride had joy in the Burma Kennels Feature 525 race, as Smurfing Season pipped Dower Romeo by a neck.

A lively 350 sprint was taken by Black Padge as Kyle McCarron’s dog edged out Titanic Jack by a short head on the line.

The quality of the night perhaps added to the sense of regret.

“The track hasn’t been doing as well as what it should,” Duffy said.

“It’s been a constant decline with further cuts and the latest cuts were the straw that broke the camel’s back. The whole place would need a restructure. Essentially, it needs to make use of the facility and become about more than the racing.

“There is always hope. I’m an optimist anyway, but you just don’t know.

“The support for the last week has been unreal. We want to thank everyone who came here to show support, to people who commented on Facebook, even just texting to wish us well. That helps the hurt.

“On the back of tonight, you’d think ‘of course’ it could stay open, but this is something as a business it needs to continue and can’t be a one-night thing.”

‘Without Lifford, what are they going to do?’ Uncertainty abounds Lifford traps close for last time was last modified: August 18th, 2019 by Chris McNulty