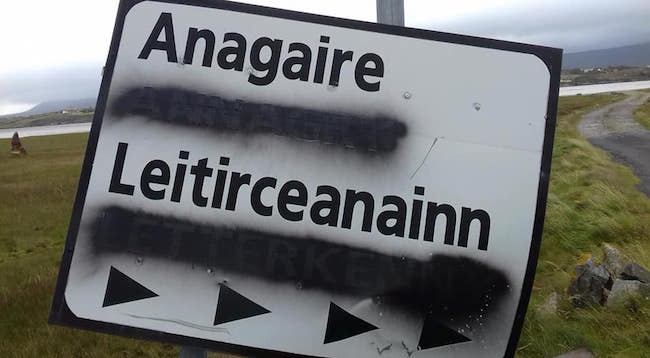 Fury over new spate of vandalism to signs in Donegal Gaeltacht

There has been a further spate of vandalism of English language signs in the Donegal Gaeltacht.

The signs are being vandalised as a protest to the English language versions of signposts being erected in the Irish-speaking areas.

Earlier today signposts a short distance from Donegal Airport were damaged after the English translation of placenames were sprayed out.

Last week local county councillor Micheal Mac Giolla Easbuig refused to condemn those behind the graffiti attacks on a number of signposts in Gaoth Dobhair and Derrybeg.

In fact, Cllr Mac Giolla Easbuig said he would encourage people who felt strong about the preservation of the Irish language to continue defacing the signs.

“The Irish language is on its knees and if people feel strongly enough that this is the way in playing their part in preserving the language then so be it,” he said.

Councillor Mac Giolla Easbuig added that the issue of the defacing of the signs was much bigger, however.

“This is not about the defacing of a few signs and it is certainly not about me. People can think what they like about me.

“This is about drawing attention and creating debate around the fact that the Gaeltacht is on its knees and the Government is ignoring it and allowing it to die,” he said.

However, fellow county councillor Michael McClafferty has slammed the latest attack on signs close to Donegal Aiport at Carrickfin.

“I was saddened to see that further signs were damaged in the early hours of this morning and I condemn any such activities.

“One of the signs defaced last night is located just a short distance from Donegal Airport – this is not the first impression we want visitors to experience when arriving in our beautiful county.

“Since my appointment in early April, I have received a number of calls from individuals/groups requesting signs and the truth is, Donegal County Council do not have the funding available to fulfil all these requests and they certainly don’t have the funding to be replacing signs due to acts of vandalism.

“Donegal relies heavily on tourism each year and signage is an essential for our visitors.

“I understand the importance of the Irish language here in Donegal however vandalism is not the answer.

“I would like to take this opportunity to thank those individuals who have given up their time to clean the affected signs.”

Fury over new spate of vandalism to signs in Donegal Gaeltacht was last modified: August 26th, 2019 by Stephen Maguire