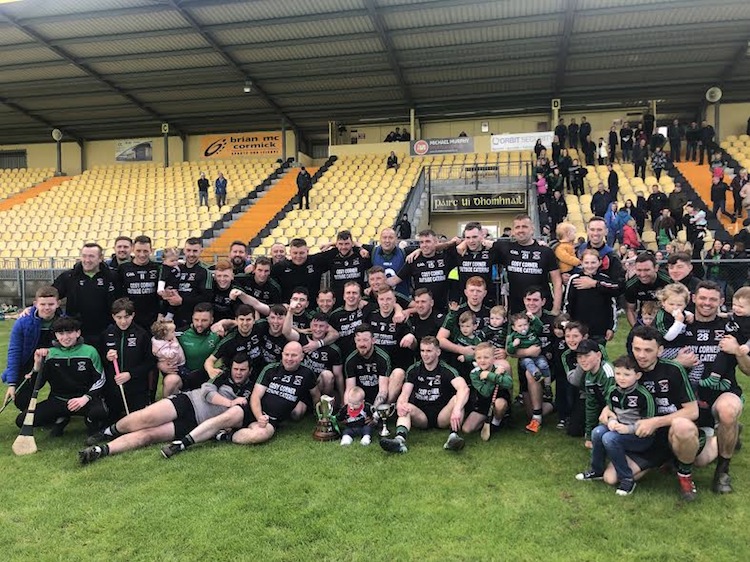 SETANTA ARE kings of Donegal hurling again as goals – and experience – proved key for the Crossroads men to see off spirited St Eunan’s.

Mark Devine’s double, either side of another by Declan Coulter gave Setanta the Munster Cup for the 16th time.

Two goals in the third quarter paved the way for the Paul Campbell-managed Setanta.

Already leading by four points at half-time, Setanta took a big step to victory when Coulter’s shot crept inside the post – and out through the net. Some of the attendance thought the ball had gone wide, but replays showed the umpire made the correct call.

Setanta took a real charge of things when Devine batted in his second goal after Davin Flynn’s approach work along the end-line created the chance.

Captain Kevin Campbell and Declan Coulter put seven points in it as Setanta made their experience count.

In added time at the end of the opening half – with Setanta in front by the minimum, 0-10 to 0-9 – Setanta were given a massive lift with the opening goal.

Devine, scorer of two goals in the semi-final, was lurking with intent and prodded home to give them a 1-10 to 0-9 lead at the changeover.

Setanta defeated St Eunan’s in the final two years ago, when they went on to lift the Ulster JHC crown, before they were caught by their old foes from Burt in last year’s decider. Setanta carried the hurt of last year’s loss over the winter months as they agonised over a missed chance.

While Flynn was unable to take his place in the Setanta attack from the start, the Crossroads men were able to recall former two-time Nicky Rackard All-Star winner Coulter, who has been absent through injury in recent times

Flynn tucked over to put Setanta ahead on 24 minutes after the sides had been level five times in an end-to-end opening.

Conor O’Donnell led the way for St Eunan’s, the underdogs, early in the game, as the Letterkenny men took the tie to Setanta.

O’Donnell’s first point, with just 13 seconds on the watch, set a lively tone for the evening.

O’Donnell drilled over again from the right-hand side and, after a neat give-and-go with Cormac Finn, he was at it again.

Kevin Campbell slammed over a free from 80 metres to level the tie, just after St Eunan’s goalkeeper Cian Hennessy saved well from a blistering effort by Coulter, who took receipt of a short free by Campbell.

Setanta hit three-in-row, with Coulter, Flynn and Bernard Lafferty – who soared over from 60 metres – giving them the edge.