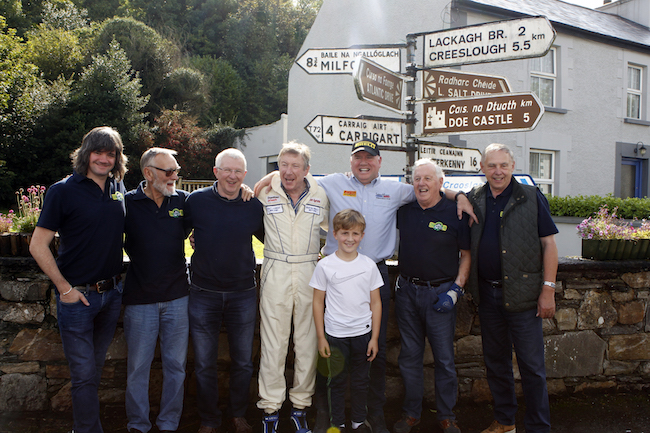 DD Motoring Correspondent Brian McDaid was at the Deja Vu Donegal Rally and had a very nostalgic time.

I’m borrowing a few lines from the James Bond Films to describe what the Deja Vu in Donegal was like for me this weekend.

A gathering of nomadic Indians could be a good way to describe our tribe of followers that made Donegal their home once more at the weekend.

If you were there taking part, giving a man a loan of a rally car, putting old signage on, watching or organising the Deja Vu Donegal you were all part of the tribe, if you had “walked on” ( a term sometimes used by tribes to describe those who departed) and someone had thought of you or mentioned your name in their conversation over the weekend, your spirit was still with us.

On the hillside on Knockalla, in a shower of rain, in a beam of sunshine through the clouds, in Glen Village or in the holy grail of Ramelton on Saturday evening, you were with us in our heart.

An experience that has happened to us before.

that sparks up a memory,

a place we have already been,

a person we have already seen,

an act we have already done.

It is a signal to pay special attention

to what is taking place,

or complete what is not yet finished. 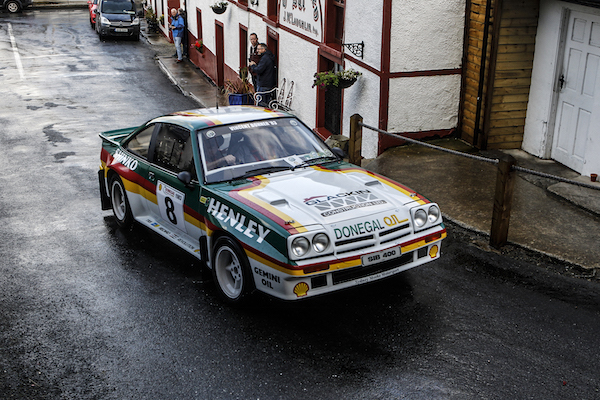 Vincent Bonner the first Donegal man to win his home event back in Glen Village on Saturday in the Deja Vu Donegal Photo Brian McDaid.

Fred Crawford was the sprint specialist in those years in a beautiful prepared red mk2 Ford Escort, with the number plate HIA 2 (I think) I still can hear the echo from that car as it went light crossing the road and the engine revs lifted outside the old McDaid’s bottling store. That day Crawford went through Ramelton in the fastest time but it was his run that has stayed with me for the longest memory.

From Russia with Love

That day I used my Zenit camera, a standard 50mm lens and one roll of Kodak colour film from Magee’s Chemist.

The sprint included a practice and three timed runs of the course and the action was great that Sunday and the shutter of my little Zenit could hardly be heard against the sound of the high revving rally and race cars heading along the Mall in Ramelton.

Heading up the “tank” on the way home that evening on foot and my thumb out looking for a lift, I felt like a fisherman heading home with the catch of the day in my camera bag. The film took a week to come back by which time I had enough money to pay for the developed set of prints. 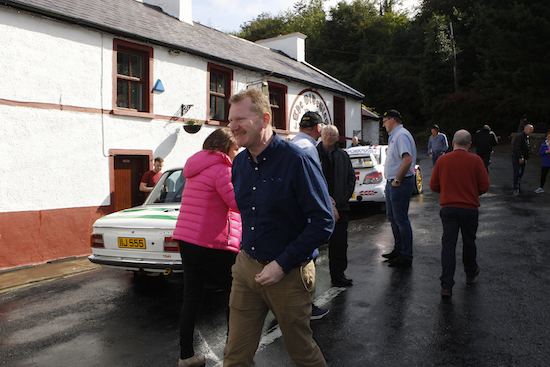 Eugene Donnelly having a word with Andrew Nesbitt for holding up the car pictured with Charlie Reid one of the event organisers for years. Photo Brian McDaid

When that roll of film returned it looked as if it was going to be my first and last photo of rallying because not one of the pictures that I captured that day came out. After a lot of soul-searching that day this 15-year0-old decided to blame his 20-year-old Russian made camera for not getting the results that year and even 40 years on I still can see the image of Fred Crawford and Cathal Curley’s beautiful Mk 2 Escorts that I never captured that day on film!

So on Saturday for the Deju Vu Donegal my point to watch and capture the famous faces going through Donegal was Glen village (just to be on the safe side) another great Donegal Rally viewpoint where that rally comes down from the hills (depending on the way it was running) a bit like the Col de Turini stage in Monte Carlo. Where the bravest of the bravest Indian warriors stayed on the gas down the hillside into the village to make up the most time.

I knew I was in the right place when I met a friend from years ago Charlie Reid also waiting for the cars to arrive. As the phone network coverage dropped out of service as it often does evening driving through Glen Village the clock was winding back to the days when you went out to see the Donegal Rally and no one could make contact with you for the whole weekend. Even the finger-post still show distance to Milford, Carrigart and Letterkenny in a quarter of a mile measurements some 14 years after Ireland was supposed to convert to kilometres. 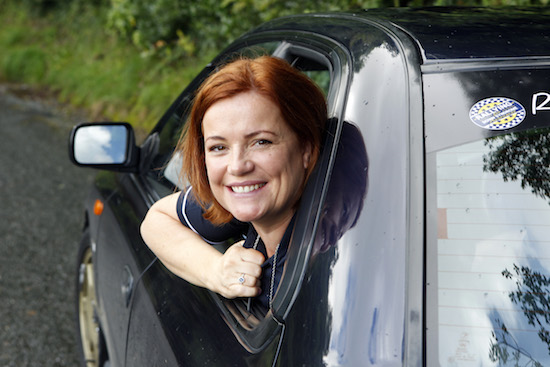 Bernie Kelly out to support the Deja vu Donegal rally at the weekend. Photo Brian McDaid

“Walk on” is the journey by some Indian tribes describing the journey a person’s spirit travel after they have passed on. As we wait in between the showers for the cars to arrive the darkening skies in the village turn the whitewashed houses to black and white and you couldn’t help but think on a day like the Deja Vu how many familiar faces you once knew that stood along this street waiting for the rally who are no longer with us.

People that all were part of the process by recalling how good the Donegal Rally was to go to year after year. The organisers of the event that worked away in the background some of which never seen on stage of the rally because of the nature the part that they played in making the rally a winner event after event people like the late Hillary Moore who past away this year who worked away in the background on the weekend of the rally. 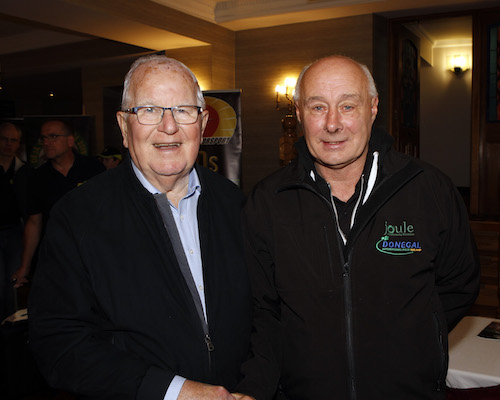 Lottie Reid, Anne Caddye, Eamonn Harvey, Sammy Fisher, Davy Wasson, Mick Henry and not forgetting Danny Caddye all people that came into my mind on Saturday morning that I knew at a local level who were the face of the motor club all gone far too soon.

Then the familiar sound starts to filter through of the rally cars coming into the village, after the pace car driven by Kiernan McAnallen with Phonsie Mc Elwee on the notes, the first-ever secretary of the Donegal Motor Club make their way through.

Vincent Bonnar is next – the first-ever Donegal man to win his home event in an Escort in 83, today he was driving a beautiful Opel Manta in Bonnar’s originally colours. On Saturday the Glen stage went up past the Glen Inn up to high Glen, the year Bonnar won the rally the Glen stage when straight through the village in that roaster of a summer in ’83 with Bonner and Mc Gettigan stripped down to two t-shirts such was the heat that had both of them cast off the top of their racing suits. 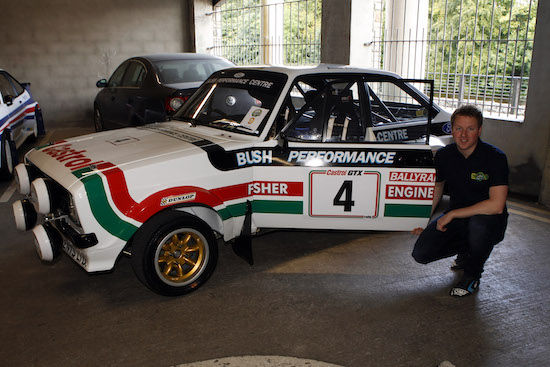 Alister Fisher with a replica of his uncle Bertie Fisher’s Escort at the Deja vu Donegal.

I think that the most iconic car to come through Glen in Saturday the one Alister Fisher was driving which was built to the exacting historic spec of the original old group 4 RS1800 Mk 2 Ford Escort, Ever thing about this car transported you back to them early Donegal Rallys. Most of all it was the detail that went into the way the sponsors of the day were recreated on this beautiful example. The Castrol Red and green strip that went around the car. Bush Performance Centre in black. Even the red Ballyraine Hotel sticker which came separate to the Castrol door plate sticker both of which were sponsors for the rally. Fisher Engineering logo all made it and iconic car of the late Bertie Fisher who was always that man to beat in Donegal his cars were mostly ex-works rally cars prepared by Sydney Meeke.

Bertie’s death nearly 20 years ago now still comes back on mornings like this, with his son Mark and daughter Emma also affectionately known as Fish who all lost their lives in a helicopter accident.

The high point of my weekend was, with the help of Rory Kennedy who rounded up some of the past winners who stopped in Glen village on Saturday morning briefly. Brian Nelson, Jimmy McCrea, John Lyons, James Cullen, Austin Mc Hale, Andrew Nesbitt and Garry Jennings, Its was a group in a picture to treasure, Then the off-beat pictures of Cathal Curley the first-ever winner of the Donegal with Andrew Nesbitt embracing each outside the Glen Inn Bar and then getting another off-beat photo for Eugene Donnelly jarring Andrew Nesbitt for holding up the tour all made it so memorable. 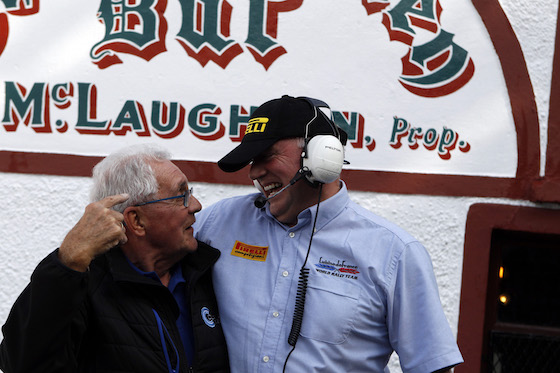 Cathal Curley and Andrew Nesbitt share a few memories at the Deja Vu Donegal at the weekend. Photo Brian McDaid.

The last word goes to one of the most emotional moments of the weekend was in Fanad where the history of the Donegal Motor Club was represented both by classic rally cars by a biggest gathering of winners and competitors past and present that may never be seen together again who all stopped at the gateway in Fanad to pay their respect to the late and great Manus Kelly, three times winner who lost his life only months ago in the rally in June, and for Mandy’s own Escort to be included, bravely piloted by Manus’s father Donald and son Donal made the Deja Vu Donegal so special for those who still are dealing with the grief of the loss of the biggest local hero and still King of the Hills, Glenswilly’s Manus Kelly

Thanks for the memories. 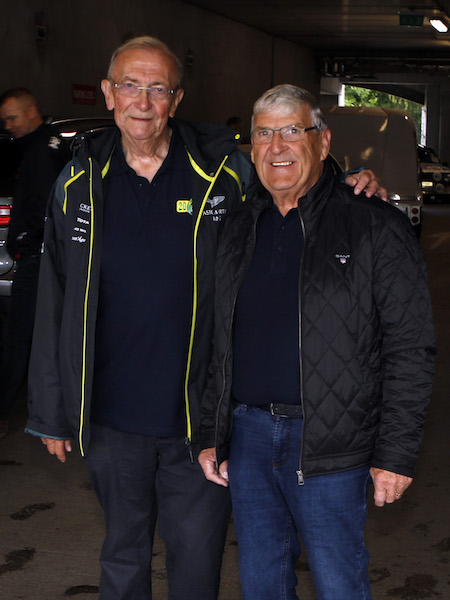 Alan Plum Tyndall one of the organisers and Vincent Bonnar at the start of the Deja Vu Donegal. Photo Brian McDaid.