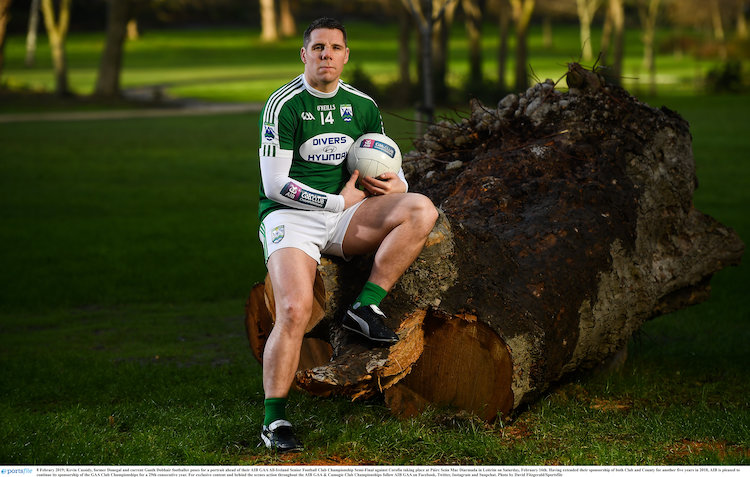 GAOTH DOBHAIR came through the wind and the rain at a wintry Dunfanaghy to see off St Michael’s in Group A of the Michael Murphy Sports & Leisure Donegal SFC, writes Alan Foley

It didn’t look great for the team from the Gaeltacht, who with a strong wind were only a point in front four minutes before half-time. However, a decent conclusion to the half and a second period that was well-managed meant that two useful points were picked up in Dunfanaghy.

St Michael’s looked to have had a fighting chance. But although conditions were incredibly difficult, they managed just six efforts on goal in the entire match, which rendered 1-3. A goal at the bitter end from Gaoth Dobhair corner-back Gary McFadden put the rubber stamp on it.

Kieran Gillespie made his first championship start for club or county since the Ulster Club SFC quarter-final win over Erin’s Own Cargan from Antrim at Carrigan Park last November, where he picked up an ACL injury within seconds of the throw-in. He replaced Odhran McFadden-Ferry, who was absent with a rib injury.

The home side were without Donegal’s 2012 All-Ireland winner Martin McElhinney, who suffered a broken cheekbone in his team’s 4-18 to 2-10 victory in Ardara.

Although the Jazz & Blues Festival meant the town of Dunfanaghy was claustrophobic, conditions at the Bridge meant it was similarly tight. There was a huge gale, supplemented by rain, at Gaoth Dobhair’s backs in the first half.

Facing that, Mark Anthony McGinley opted to go short from a fourth minute kick-out, only for  Eamon Collum to pinch possession and Kevin Cassidy drove inches wide when going for goal.

Three minutes later, Niall Friel, the Gaoth Dobhair captain, opened the scoring and on the quarter-hour Collum put over a free. Odhran MacNiallais used the wind to be on the money with a 20thminute free from the 45-metre line and Michael Carroll’s crisp effort made it 0-4 to 0-0.

At this juncture, St Michael’s had yet to register so much as a shot on goal, with Christopher Sweeney in the Gaoth Dobhair goal a virtual spectator. However, with a second half with the elements at their back and a local knowledge of sorts, manager Gary O’Neill might’ve have been too disappointed.

He’d certainly have worn a smile when Colin McFadden shot a goal past Sweeney on 26 minutes, blasting high into the top corner after an electric run from Michael Langan. That left it 1-0 to 0-4 as the first half bore to a close.

Ethan Harkin, the Gaoth Dobhair replacement for Cian Mulligan, made it 0-6 to 1-0 at half-time, although that three-point advantage looked fragile.

The reigning county and provincial champions Gaoth Dobhair opened with a 1-3 to 0-6 draw with St Eunan’s at Maheragallon six days’ beforehand.

Mervyn O’Donnell’s team opted to keep their shape and had plenty of the ball in hand in the opening stages of the second half. Twelve minutes in though, Langan scored from long range.

St Michael’s weren’t created enough and were made pay when another good Gaoth Dobhair break led to a foul and subsequent free scored by MacNiallais. With 10 to go, it was 0-7 to 1-1 for Gaoth Dobhair.

St Michael’s need something and with six minutes left almost fashioned a goal only for Sweeney turn over a Langan punch after a long ball in from Christy Toye. And when Toye himself plonked one over from distance two minutes later, there was just one in it: St Michael’s 1-3 Gaoth Dobhair 0-7.

Only then had the contest come to the boil and Gaoth Dobhair, who’s have preferred more of a simmer, did eek out to two in front again when Kevin Cassidy punched over. Gaoth Dobhair have played better in recent years, but their second half at the Bridge was commendable.

That theory was emphasised when Gary McFadden, in the sixth minute of injury time, punched home a goal at the back post when Naoise Ó Baoill was the provider. Mark Anthony McKinley in the St Michael’s goal complained for square ball, so much so he was black-carded on the final whistle.

Both still have a chance of progression with St Michael’s welcoming St Eunan’s next weekend and Gaoth Dobhair taking on Ardara.