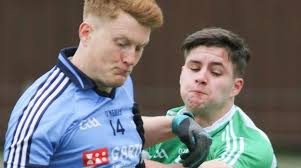 History made as Milford punch tickets to SFC quarter-finals

MILFORD ARE the first team through to the quarter-finals of the Donegal SFC – and are into the last eight for the first time in the club’s history.

By Chris McNulty at Moyle Park

Nine points from Luke Barrett were ket as Milford held sway in an absorbing contest with Glenfin.

The tie see-sawed right until its close when Milford, finally, prevailed by the skins of their teeth.

The hosts were peering through their fingers in added time.

Gerard Ward’s penalty, two minutes from the end, and a Daniel McGlynn goal, in the last minute, had Glenfin – who had a goal earlier in part two by Stephen Carr – level.

But Milford shook their head with Gary Merritt, Ryan McMahon and, fittingly, Barrett, arching over three points on an historic day for Milford.

Last weekend, Milford record a first win in the senior championship in 26 years as they defeated Four Masters, but Glenfin arrived buoyed by their own stalemate with Glenswilly and a game they could -and perhaps should – have won.

Glenfin goalkeeper Liam O’Meara saved well from Kane Barrett’s close-range effort, while Glenfin ought to have hit a goal when Ciaran Brady and Daniel McGlynn combined to set up Karl McGlynn, who hit the side-netting.

Brady was last night cleared by the Donegal Hearings Committee having been sent off in last week’s draw with Glenswilly.

Milford finished the first half on top with Barrett (3), Cathal McGettigan and Gary Merritt giving them a 0-7 to 0-3 advantage.

Seven minutes into the second half, Carr drove home after being teed up by Ross Marley.

But Milford hit back in style and, on 46 minutes they struck gold as Kane Barrett finished after a fine move that involved McGettigan and sub Ryan McMahon, who gave a sterling contribution after his introduction.

Six up with 13 minutes left, Milford should have been home and hosed – but Glenfin weren’t going to give in.

Three Ward frees had them right back in it and when Ward smashed in a penalty, after Brady was fouled, the visitors were level.

It was all square and anyone’s game, but that last trio of scores punched Milford’s tickets for the knockout phase.