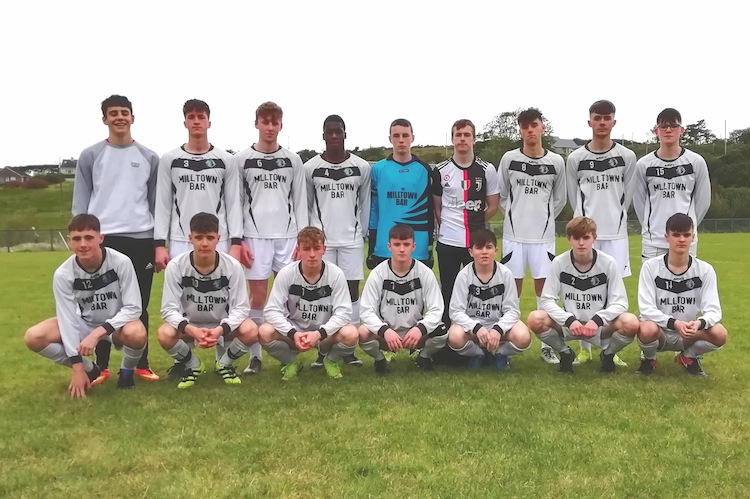 The league season in the Donegal Youth League goes to the wire next Saturday when Letterkenny Rovers host Keadue Rovers at Leckview Park.

Both sides have lost just once this season so its a winner takes all to see who lifts the trophy named after the late Dick Duffy and it promises to be a fitting finale.

The Shield section also goes to the wire with Eany Celtic needing to avoid defeat at Lagan Harps to lift that title.

If were Lagan to win then they would join Eany at the top and force a playoff and if that was to happen they could also be joined by Gweedore United if they were to win at Milford United on the same afternoon.

Keadue played the early game on Friday evening hoping to exert some pressure on Letterkenny and they duly did that by easing to a comfortable win at Swilly Park.

Just as they had in their previous game at Bonagee the Rosses men started the game at a high tempo and were 4-0 up inside the opening half hour before making it 6-0 at halftime.

The second half was a more even affair and Keadue added another to set up a title showdown at Letterkenny next weekend.

Goalscorers for Keadue were Aidan McHugh, Jack Doherty and Eoin Mrtin with a brace apiece and Peter McGee.

This game played in tricky conditions saw the home side claim all three points.

United with the aid of a strong wind started on the front foot and broke the deadlock after 7 minutes through Aidan Griffin after good work from Steven ‘Doyle’ McFadden.

The home side doubled there advantage midway through the first half after great individual work from Steven ‘Donna’ McFadden seen his left footed shot cannon in off the post from the corner of the 18 yard box.

Lagan to their credit grew into the game and had a couple of dangerous free kicks from Ciaran Quinn saved well by United’s keeper Peadar Ó Baoill.

United started the second half strongly and were rewarded with a third goal on 50 minutes after a brilliant ball from Steven ‘Doyle’ McFadden was latched onto by Aidan Griffin who made no mistake from close range.

Lagan put the Gweedore defence under serious pressure with the aid of the wind but the home sides defence stood strong.

Gweedore finished the game with a fourth goal with good link up play between Nathan O’Brien and Steven ‘Doyle’ McFadden down the wing saw the ball being cut back to Kyle Doohan who finished well from close range.

Best for Lagan Harps were  Ciaran Quinn and James Wilson, a strong team performance from united with Mícheál Martin the stand out performer.

Eany Youths extended their winning streak to three after a convincing four nil win over Milford in the Donegal Youth League at Eany this afternoon.

The sides went in level at half time with both having squandered good opportunities to take the lead.

The second half saw Eany strike early on when James MacNamara produced a composed finish after an Ethan Mangan strike was parried.

Their lead was extended in the 60th minute when Michael Coughlan’s free kick from the half way line was saved by the keeper only to see Ethan Mangan tee Nathan Maxwell up for a good finish from 10 yards.

Milford pressed hard for a reply and were unlucky not to pull one back after Eany’s Tom Daly blocked on the line from a corner.

In the 70th minute Eany went three up after Harry Howarth finished off a slick passing move that began with Michael Coughlan at the back.

With 10 minutes left on the clock Nathan Maxwell grabbed his second and Eany’s fourth after a fine strike from 30 yards found the top corner.