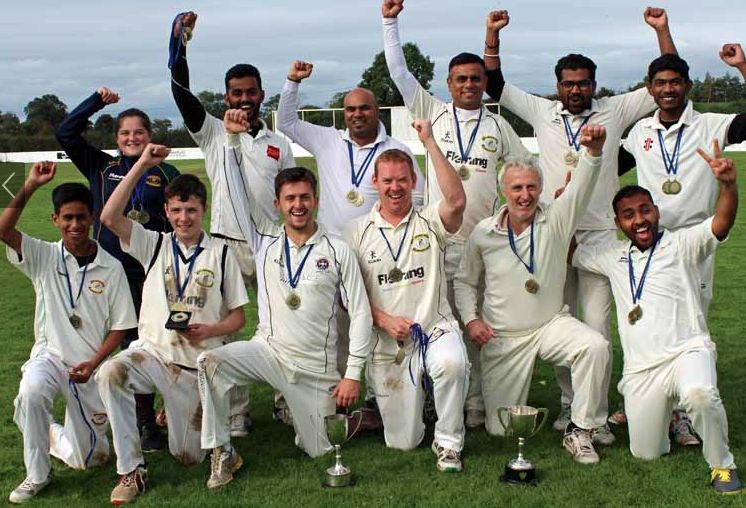 ST JOHNSTON completed the double with a victory over Grove Hill securing the Derry Midweek League and Cup double.

With the pitch heavy following overnight rain, a decision was taken to reduce the game to ten overs.

Deepak Reddy fell early, but Scott Macbeth and Ethan Lapsley set about rebuilding the innings with MacBeth in particular taking the fight to the Grove Hill bowling who stuck to their task well backed up by good fielding.

The St Johnston innings closed on 62 with MacBeth top scoring on 34.

This total seemed defendable but the Grove Hill wicket keeper, Tommy Orr, set out his stall to attack and hit the usually dependable Manav Bhavsar for a number of sixes to the large midwicket boundary.

St Johnston skipper David MacBeth switches his bowlers around regularly and Orr, who had seemed about to win the match on his own, was well caught in the deep by Ethan Lapsley.

With five required to win off the last over, David MacBeth backed himself and Grove Hill were restricted to four amidst a last ball run out for a dramatic tie. 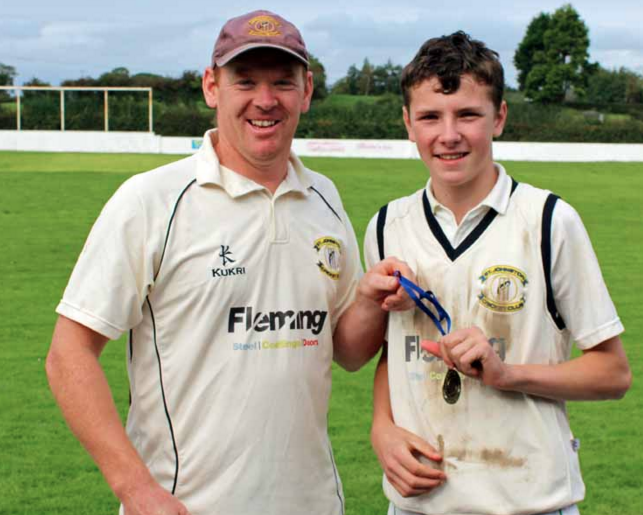 After a debate the clubs were offered, and took, a deciding ‘super over’ with Grove Hill to bat first.

Scott MacBeth bowled for St.Johnston after a good spell in the match but his first delivery was smashed sensationally into the housing estate by Orr, who looked set to continue from where he had left off in the match.

In yet another twist though the next five balls, only went for 3 runs and the total of 9 seemed attainable.

After his relative failure in the match Deepak Reddy went out to face the experienced Vinny O’Hara.

Amid uproar the first delivery was again swatted for a six before Reddy and Scott MacBeth each took a single. 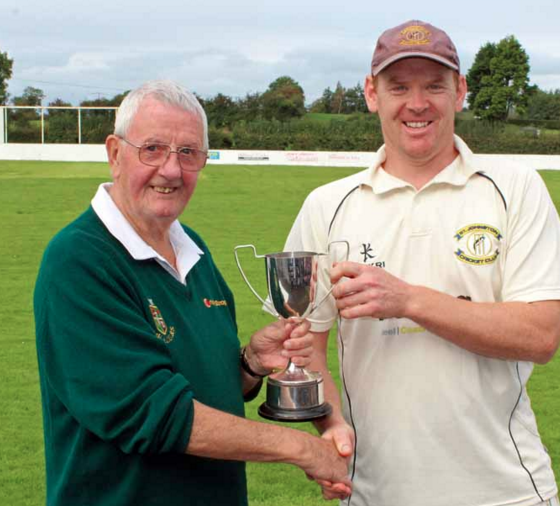 David Macbeth is presented with the Cup

O’Hara called in the fielders to save the last run but to no avail as the winning runs were hit and the celebrations began with Scott MacBeth given a deserved man of the match award.

This was almost Grove Hill’s first trophy and the dramatic nature of their defeat, with St.Johnston seemingly almost out of the game on several occasions, made it very difficult for them to take, but for the neutrals, and those backing the Saints it was an excellent 22 overs of cricket played in very difficult conditions.

St Johnston added the Cup to the League title for a fine campaign for the Railway Road men.