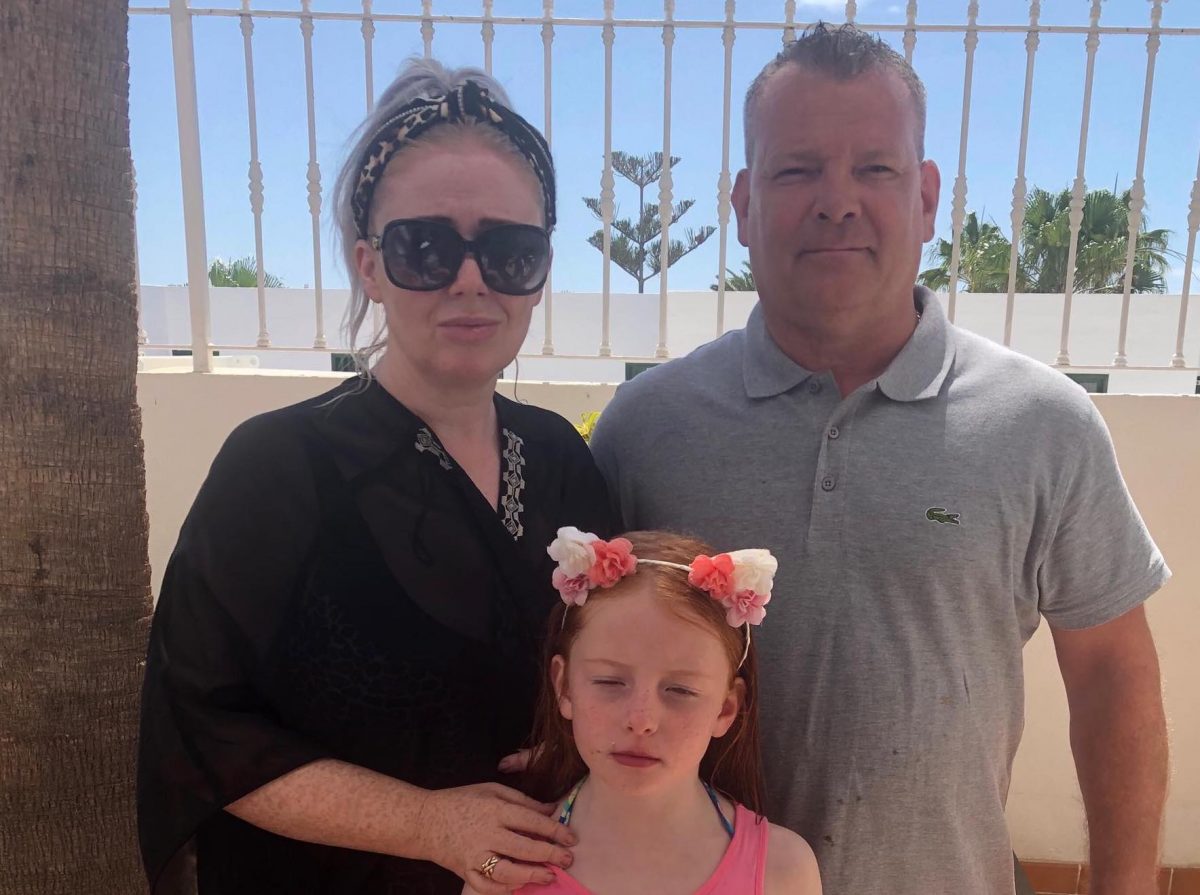 A Buncrana family were forced to pay €450 for replacement flights home after holiday operator Thomas Cook went bust, it has emerged.

Sean Tolley, his wife Maureen and their eight-year-old daughter Lily May were hit with the heartless demand after the collapse of the British travel company.

The family were halfway through their €1400 holiday in Lanzarote when news filtered through that their return flight to Belfast International Airport was in jeopardy.

Turning to the hotel reception in search of a longer stay at the premises they were told that the hotel was ‘completely booked’.

The family group were told the Civil Aviation Authority would arrange a new flight but that fell through as well, forcing them to fork out the last of their cash on flights home or face sleeping in the street with their young child who suffers from autism.

Thomas Cook went under on Monday when they unable to secure the extra £200 million needed to keep the business afloat following a full day of crucial talks with the major shareholder and creditors.

Meanwhile, the Irish Travel Agents Association believes only a small number of people from the Republic of Ireland were affected by the collapse.

Thomas Cook pulled out of the Irish market a number of years ago, so the ITAA said any bookings by Irish people would have been made directly through the firm and would have involved flying through the UK.

And while Mr Tolley and his family had return flights into Northern Ireland for today, he was forced to pay almost €500 yesterday (Weds) for a Ryanair flight into Dublin Airport when they recieved no response from Thomas Cook.

The Tolley family, who travelled to the Canary Island last Thursday, says they checked their situation immediately, but no information had been updated since Monday, despite five other flights due to arrive in mainland England today.

Sean said the whole situation has been ‘deeply distressing’ for his wife and his young daughter.

Speaking to Donegal Daily from Lanzorate on Wednesday night, Tolley said: “There is no information at all for us, we have been kept in the dark completely and when we have checked online it says ‘information to be updated’.

“I went up to the reception at the hotel on Tuesday and I asked them if the worst-case scenario happens, would we be able to stay in our room or would they be able to move us to another room and they told us that it was completely booked because there is a wedding here on Thursday.

“Baring in mind that my wife is deeply distraught by this whole situation,” he added. “She has been up checking since the small hours to see if the flight information had been updated and when I got out of my bed this morning (Weds) she was crying her eyes out.

“And we have an eight-year-old autistic daughter and if we were to go to an airport full of queues everywhere, she would go into a meltdown.

“We’ve had to literally go online today (Weds) and buy the last three seats available on a Ryanair flight that will fly us into Dublin.

“Now we live in Buncrana and we flew to Lanzorate from Belfast and I have my car parked in Belfast,” Sean explained.

“But I had to secure the fact that we are going to get out of here on Thursday because it is putting my family through a terrible time and we’ve heard nothing from anybody.”

Sean said that the entire ordeal has overshadowed what was supposed to be a family-fun and relaxing holiday.

He continued: “Now on the first day this all happen, they instructed us to update our personal information online and they would keep us informed.

“But not one person has contacted us, not one person, and my wife was on the phone today again and we were informed that there was nothing that they could do for us.

“It’s terrible, it’s absolutely terrible,” Tolley said. “We have been left in a situation where we would have been turfed out on the street or book additional flights, writing them ones off, and spending additional money to get us home.

“It has spoilt the holiday because, since Monday, when all of this came out, we’ve done nothing but worry.

“And the fact we have an eight-year-old autistic daughter, who is now seeing her mother being distressed and asking why her mother is upset, it hasn’t been nice, to say the least.”