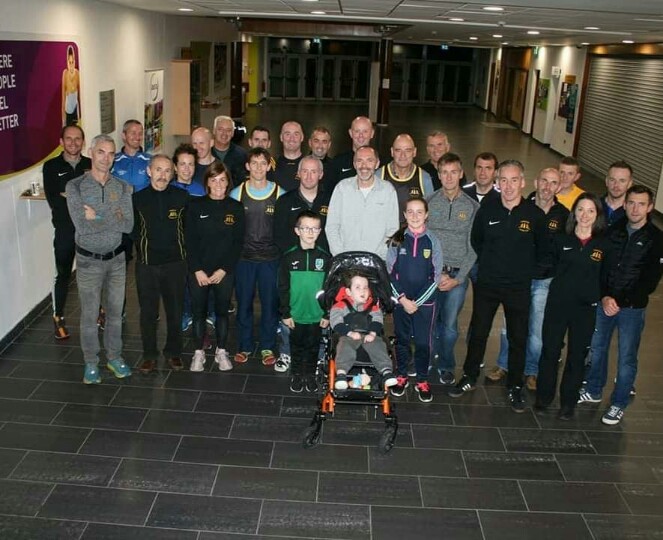 Two of Donegal’s best-known sports clubs have teamed up to raise funds for young Conall Shiels from Letterkenny through their members’ participation in this year’s Dublin City Marathon.

Members from Letterkenny Athletic Club and Letterkenny 24/7 Triathlon Club came together in the Aura Leisure Centre to launch their unique fund-raising drive which will link in to the High 5 For Conall campaign initiated earlier this year.

Before Conall was born, he was diagnosed with severe hydrocephalus, a fluid build-up in the brain.

His condition means he is non-verbal and is a wheelchair user and he needs 24-hour care. He is also peg fed; meaning most of his nutrition is pumped through a machine into his stomach.

Addressing the launch, Conall’s father, Kieran, said that the money raised by the local clubs will go to help carry out the renovations of the family home.

“We just got word earlier this week that planning permission has been granted and we can’t wait to get up and running with the works. Conall needs a hoist, Conall needs a bigger room and Conall needs a specially-adapted wet-room so that we can care for him properly. This will all make an immense difference to him as he grows into adulthood and we will be able to look after him more comfortably,” Kieran said.

Kieran extended his thanks to Letterkenny AC and Letterkenny 24/7 for taking on a fundraising challenge for his son.

He said “What we have noticed since the High 5 For Conall kicked off earlier is that it has brought people together and has brought the whole town together. We have seen how friends, family and clubs have all rallied and come together to help our family. Tonight’s launch is something with a difference in that it is bringing two clubs together which is very humbling for us.”

“We will be keeping tabs on all the runners from both Letterkenny clubs who will compete in the Dublin Marathon on October 27th and hoping they all get over the finish line safe and well. I hope they will all think of our Conall when they are finding it tough over the last few miles.”

Speaking at the launch, Letterkenny Athletic Club Chairman, Aidan McKenna, said that the club had a long tradition of competing in the Dublin Marathon.

“We’ve always had big numbers taking part and the club has also raised money for a number of worthy causes down the years. There seems to be a bigger number than usual competing in Dublin this year which is great to see. We wish them and the members from the Letterkenny 24/7 Triathlon Club, who we are delighted to team up with, all the best in four weeks’ time,” Aidan said.

Echoing his sentiments, Letterkenny 24/7 Triathlon Club Chairman, Liam Tinney, said that last year was the first time the club had raised money for charity through the Dublin Marathon.

“We raised over €7,000 for the Coombe Hospital through the 2018 Dublin Marathon and are delighted to be joining up with Letterkenny AC to raise funds this year for Conall Shiels. I wish all those competing in Dublin well,” Liam added.

Around 40 members from both Letterkenny clubs will compete in next month’s event in Dublin.