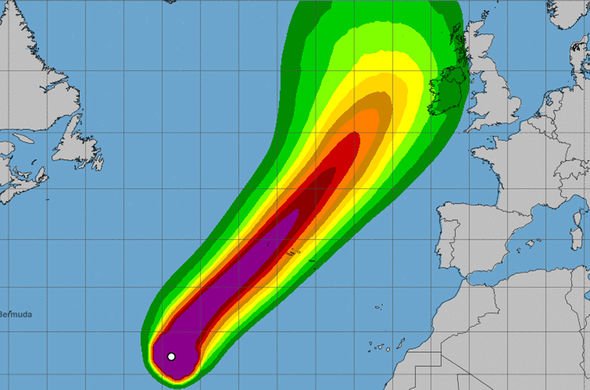 Donegal braces itself as fears over Hurricane Lorenzo increase

Met Eireann is tracking Hurricane Lorenzo amidst fears that it could hit the West coast of Ireland including Donegal on Thursday.

The national forecaster admitted that it is “seriously concerned” about the weather patterns but things will become clearer over the next 36 hours.

The hurricane is still in the central Atlantic, currently southwest of the Azores.

Lorenzo has increased in strength to a Category 5 Hurricane according to the US National Hurricane Centre.

Irish warnings for the hurricane are not expected to be issued until Wednesday.

Donegal County Council has yet to issue any warnings or information bulletins relating to the hurricane.

“Some of the model output, particularly from the National Hurricane Centre, has the centre at that stage, ex-Hurricane Lorenzo, moving up to the west of Ireland.

“But our European centre and the British Met Office, we have solutions that has it turning right to come right in over Ireland and even then it’s not certain what track it would take if it did come in over Ireland.

“We’re seriously concerned about it. We are having regular updates with our colleagues in Britain and America.

“We’re looking at every runs of the models, we have our research division involved. So it’s all hands on deck here until the danger passes.”