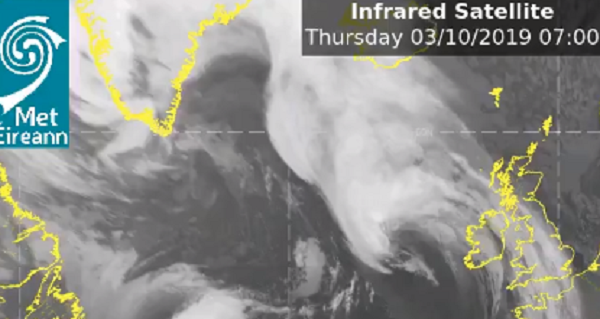 Met Eireann has updated Ireland’s weather alerts for Storm Lorenzo as the storm is due to peak earlier than forecast in certain areas.

The North West is expected to escape the worst of the storm. Donegal is under two Status Yellow warnings, while other counties on the west and south west coast face Status Orange strength conditions.

The Wind Warning for Ireland has been cut back to 9am-6pm today (Thursday), while it was initially due to be in place for the entire night. Winds will reach mean speeds 50 to 65km/h with gusts 90 to 100km/h resulting in some disruptive impacts, according to Met Eireann.

The Rainfall Warning remains in place for Donegal from 9am Thursday to 6am Friday. Heavy downpours are expected to result in some flooding today and tonight.

We have updated our warnings. Please see https://t.co/oOxITrsnvw for the latest warning information for your area. #stormlorenzo #Lorenzo pic.twitter.com/J1wYl0Vxm6

Donegal County Council is asking the public to be vigilant with regards to falling trees and debris. Trees are mostly in full leaf, so even moderate strength winds can bring down weakened trees and/or tree limbs.

Sea surges are forecasted along the West coast from the southwest coast up to Donegal of .6m to 1m and the public are being asked to be extra vigilant along the coast.  The Irish Coast Guard is advising the public along coastal areas to ‘Stay back, stay high and stay dry’.