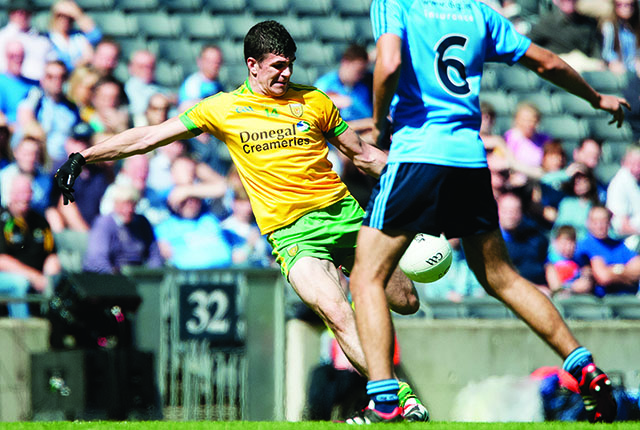 JOHN CAMPBELL was the difference as Buncrana got past St Mary’s, Convoy to book a place in next weekend’s Junior Championship final.

Campbell scored 1-7, including a 15th minute goal that was the big score in a game that never really caught fire.

Campbell’s goal kept Buncrana at arm’s length and Convoy couldn’t quite get close enough to make them wobble.

Campbell hit three-in-a-row to move Buncrana in front after Joe McGill’s point just 20 seconds in had given Convoy an early advantage.

Midway through the first half, the big full-forward had the ball in the net. Darach O’Connor’s ball in was broken down and Campbell crashed into the roof of the Convoy net.

Frees from Joe McGill, one of which, off the ground, belied the testing conditions, kept Convoy in the hunt.

St Mary’s had a fine summer in winning promotion into Division 2 of the All-County League, but recent weeks have seen a few key men depart.

Laurence McMullan has had to say farewells to Emmet Patterson, James Kee, Emmet McNulty and Jack Blake – all of whom have emigrated.

Paddy Dolan, the joint captain of the Donegal U20s this year who has trained with Donegal’s seniors, shook off an injury scare to take his place in the Convoy XV.

McGill tucked over another free to narrow the gap to two, but Donegal player Caolan McGonagle landed a ’45 and Campbell kicked another point as Buncrana went in 1-6 to 0-5 in front at the break.

There were ripples of shock sweeping across Donegal last year when Buncrana plummeted down from the Intermediate Championship, but the Scarvey men entered this year as the Junior Championship’s favourites.

The return of Darach O’Connor following a summer in San Francisco and the addition of goalkeeper Harry Doherty gave them added dimensions, not to mention the reappearance in the club colours of 2012 All-Ireland winner Ryan Bradley, who came on here for the final 20 minutes.

O’Connor was forced off at half-time having picked up an injury late in the first period, but sub Odhrán Doherty fired Buncrana – who came through the group phase without much fuss – five in front just after the restart.

Dolan and McGill kept the scoreboard ticking for St Mary’s and, as the game headed for the final quarter, only Campbell’s goal separated the sides.

When corner-back Michael Patton clipped over 11 minutes from the end, there were just two points in it and the score served as a reminder that Convoy weren’t going quietly.

However, two frees from Campbell, both of which were won by McGonagle, soon had four between them.

In the dying moments, Bradley almost had a second Buncrana goal, but his effort was stopped on the line.