Raphoe ladies lose out to Queen’s

Raphoe welcomed the students from Queens to the Royal and Prior, for their second game in the Premier League.

Having secured a win in their opening game, Raphoe were optimistic that they could give a tough battle to any team that make the journey to Donegal this season.

Queens have been a well established team in the Premier League for quite a few season now, and their experience at that level showed throughout the game.

From the very outset, Raphoe were forced to go into defensive mode, with Queens playing a quick movement game, both on and off the ball.

Raphoe were unlucky not to open the scoring during a short corner routine in the first ten minutes – when a rebound from a shot fell to two Raphoe players, but unfortunately neither of them were able to take their chance and put the ball away.

At the other end of the pitch, Queens were winning a number of short corners and it was just before the end of the first quarter that they got the first goal of the game from a well worked corner routine.

During the second quarter, the pressure within in the Raphoe half of the field was showing, with some miss-timed tackles leading to Raphoe receiving two green cards and one yellow.

It was during one of these spells, when Raphoe were down to 10 players, that Queens added another goal to the score sheet – scoring another short corner and leaving the scoreline at 2-0 at the half-time break.

Raphoe started the second half more strongly, with some excellent runs being made by Leanne Patterson and Zara Tinney.  Patterson, who isn’t afraid to take on players, found herself through on goal with only the keeper in her way.  Unselfishly, she passed the ball square to Amy Wauchope, who unfortunately seen her shot saved by the Queens keeper. 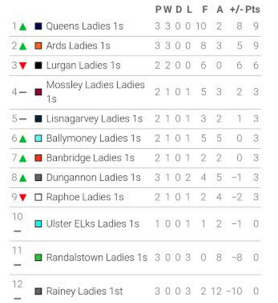 A goal at that time of the game could have settled things down for Raphoe, and would have put them back in the running again, but the exact opposite happened and a quick attack down the field by Queens and a goal from another short corner made it 3-0 to the visitors.

With ten minutes left in the game, Raphoe got a small reward for all the hard defensive efforts.  Raphoe won a short corner and a well struck shot from Wendy Patterson, seen the ball deflect off a Queens foot into the net, bringing the score to 3-1.

However, Queens were not finished for the day, and having seen a shot saved on the line by a Raphoe foot, they were awarded a penalty stroke, which was well converted and left the final tally on the day at 4-1.

Raphoe can take some positives from the game and in the fact that they didn’t conceded from open play, but they also know that to do well and maintain their position in this league, they have to be able to convert when the chances fall to them.

Next week, Raphoe make the journey to Ballymoney, another top side in the Premier league and the home club of Irish Captain, Katie Mullan.